It's a common right wing meme that raising federal revenues will not reduce the deficit.

This is idiotic, since the math is pretty simple.

If Revenues are larger than Expenses, you have a surplus -- DOH!

Here it is, in the real world.

A careful observer might also note that flat revenues from '82 to '84, while expenses continued to rise, had a lot to do with St. Ronnie's record-breaking deficits.  Also, below-trend Revenue increases for Bush the Greater led to an even bigger deficit. 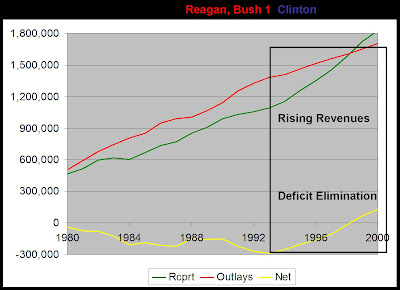 Then Revenue increases happened, rising faster than expenses. I think there might have been a tax increase in there somewhere.   It's really a shame math is so damned hard.
.
Posted by Jazzbumpa at 11:52 AM

You bet. I applaud you for taking on this topic. I'm so disgusted and have been for so many years now that whenever I sit down to try to write about the political situation, my blood pressure rises and I can't think straight. Thank you.

Now I'm making my way down to see your SSS post!

What, you didn't get the memo? Tax cuts+unfunded war spending = surplus. And SSI contributes to the deficit.