On the 9th of June the Tigers began a series of 14 straight games against Central Division opponents.  I said then that going 7-7 would not be good enough.   Ten games into it [with one rain-out against the White Sox] they are 4-6.  The best that can do now is 7-6, and that will take a sweep in Cleveland, where their demise began, just over a month ago.

Most recently, the Tigers eked out a win against the first place Royals [How weird does that look?] thereby avoiding getting swept in a 4 game series AT HOME.  And it has been every bit as bad as that makes it sound.

After completing a sweep of the Red Sox in Boston on May 18th, the Tigers' run differential stood at 55 for the 39 games played up to that point.  After game 67, on June 17th, a devastating 11-4 loss to the Royals, the run differential reached -2.  In 28 games the Tigers had been outscored by 57 horrific runs.  After splitting the next two games by identical 2-1 scores, they're again at -2.

There is no single cause.  Starting pitching for anyone not named Anibal went from outstanding into a range between ordinary and dismal.  Relief pitching gave no relief.  Scoring evaporated to the extent that they were shut out 3 times in those 28 games, and averaged a mere 3.933 runs per game.  This is scoring at the Seattle - Houston level, equivalent to 21st out of 30 MLB teams.  This stretch also includes a 12-9 win over the Twins, and a game in Cleveland where they scored 10 runs and lost by 1.

As this suggests, pitching has been awful.  The table shows the ERA's of the Tigers' rotation on the last start before arriving in Cleveland on May 19th, compared to now.  Sanchez has been outstanding, Smyly ordinary, and the rest at times embarrassingly bad.  We won't even look at the relief staff.


Now consider hitting.  For simplicity, we'll just look at batting averages.  Martinez, Marinez, and Cabrera have continued to produce, though Miggy is only hitting .259 for the latest 8 games.  Castellanos has brought his average up.  But Jackson, Hunter, and Kinsler have dropped off quite a bit.


After their win last night - a razor-thin 2-1 victory behind another brilliant start by Sanchez, an assist by Jaba, and Nathan finally having a strong 1-2-3 9th - I'd like to be optomistic.  But Verlander is burned out, Scherzer's last start was ghastly, and Smyly can be erratic.  Even worse, in the last 2 games, they've scored a total of three runs on 9 hits.

At their apex, the Tigers were on a pace to win 112 games.  Now the projection is 87.  There's a lot of season left, and plenty of time to turn this ship around.

But everything from pitching to hitting to fielding to base running will have to get a lot better.

Conservatism involves a lot of “shut up, you whiners!” followed by whining.


I'm chagrined to admit that I never heard of this song, and - even worse - knew nothing of the iconic Leonard Cohen, until our oldest granddaughter did an ensemble dance to it in competition a couple of years ago.  It was somebody else's smooth-voiced cover - there are many and I never did find out whose - not Cohen's gravelly bass.

Knowing her dance studio as I do, I'm sure the more obviously suggestive verses weren't included - as indeed, they weren't included in Cohen's original studio recording.  The strange thing about this song is the coupling of two concepts - religious ecstasy and sexual gratification - that seem totally disconnected in modern culture.

It wasn't always so.  If I have the history right, back before the Old Testament Jews abandoned human sacrifice and tried their experiment with monotheism, they were not much different ethnically or culturally from the rest of their Canaanite neighbors.  At least in some parts of the Mediterranean basin - and I think this includes Canaan - sex, fertility and procreation were integral with nature and the earth, even if not specifically coupled with goddess based religion.

Somehow, when the sky daemon replaced earth daemons, sex became dirty and sinful, goddesses became whores, and, thanks in no small part to the rabid misogynist Saul of Tarsus, whole civilizations became puritanical.  Or at least such was their claim.

That legacy haunts us today.  You see it in the insane objections to insurance coverage of birth control [which was never a problem until it became part of Obamacare], gender-dependent double standards of morality, and the Republican war on women.

Still, whatever our views on religion or lust, in the privacy of our own homes, we can experience a  hallelujah moment - and, for now at least - no matter how cold and broken, make our own decisions as to what that means.

Tigers May Wrap Up

Around mid-month I posted updates Part 1 and Part 2. 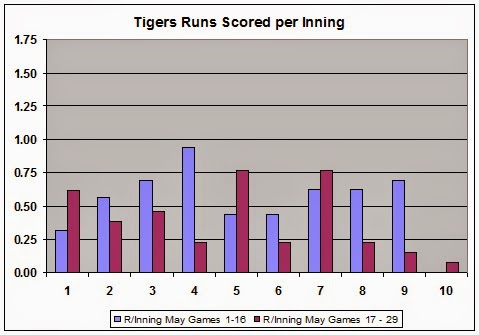 Innings 1, 5 and 7 have been OK lately, but for the rest of the game, production has fallen off badly.  But that's not the worst of it.  Graph 2 shows opponents scoring by inning, same color code. 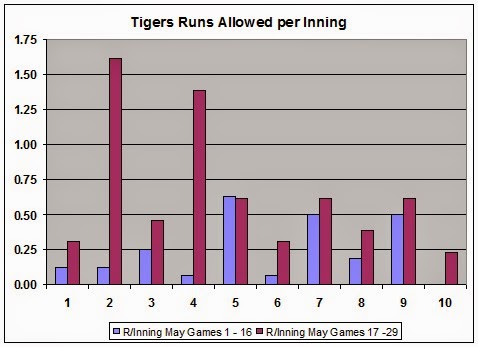 This is every bit as bad as it looks.  Note that both graphs are on the same scale. Through two + cycles of the rotation, starters put up four good games, 2 by Sanchez, and one each by Verlander [after three dismal starts] and Smyly - the latter sadly, a 3-2 loss.  Except for the 5th inning, which is a wash, all the others were worse after game 16.  Innings 2 and 4, when the meat of the opposing line ups came through, were terrifying.

This is what happened

Here is the scoring summary.

Scoring declined by 1.4 runs per game.  Late scoring only looks good because it is in the context of overall bad scoring.

All I can say about this is read it and weep.

Graph 3 shows the winning percentage after each game, and the number of wins that would project to at season's end. 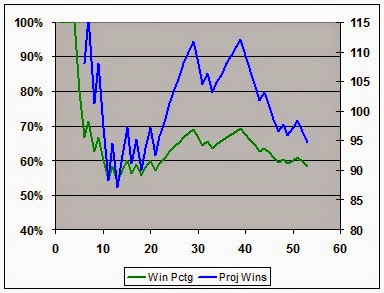 For a while, 100 wins looked attainable.  It might still be, but things would have to get much better quickly.

The last graph [4] looks at Cabrera's batting average, one of the few bright spots. Since a rocky start, he's done extremely well. 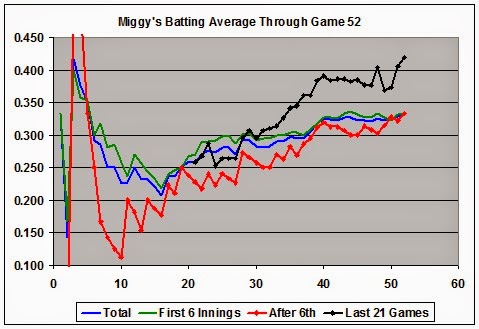 Early on, his batting after the 6th inning lagged, but now has caught up with the first 6 innings.  The black line indicates his average over the most recent 21 games.  It's been at or above .370 since game 39.  His overall average has been in the mid to high .320's since game 40.

May didn't end well for the Tigers, and June started with a shut out.  Baseball is a streaky game.  A bad streak is steeped in misery.  Here's hoping they can get things turned around soon.

Posted by Jazzbumpa at 2:54 PM No comments: