What the Hell?!? Friday - Pt 2 - Conservatives vs Democracy Edition

Way back in 1980, in a rare moment of lucid candor, a leader of movement conservatism very bluntly laid out why he hates democracy.

By their words shall you know them.

Does anyone know of the name of the phenomenon that happens when your brain cramps when learning new things?


One of his friends answered

which is probably technically correct.

But my answer, which they both liked, was

Posted by Jazzbumpa at 11:32 AM No comments:

... The single most effective way of avoiding another financial crisis is to reduce the political influence of the banking sector.
--------  Simon Wren-Lewis

Labels: economics, politics, quotes, we are so screwed

What the Hell?!? Friday - Grease Edition 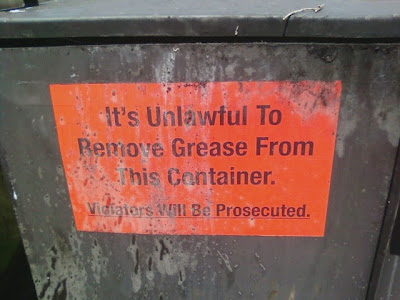 Quote of the day from reflectionephemeral, commenting at Noahpinion:

the American right is held together by resentment and tribal affinity, lacking any coherent political or ideological ideas.

The individual health insurance mandate was the conservative health care policy for about a quarter century. Then a black Democrat tried to compromise with the right by agreeing to implement it, whereupon every Republican politician in America denounced it as unconstitutional socialist fascism.

As with Milton Friedman, the career of Ronald Reagan is shot through with actions that would have him read out of today's Republican Party. As president, he repeatedly raised taxes, talked to Mikhail Gorbachev (earning him comparisons to Neville Chamberlain), argued that failing to raise the debt ceiling would be ruinous, and later called for an army for the UN.

To today's right, Reagan and Friedman stand for freedom, America, bald eagles, the Constitution, and Screw You Obama. Learning and writing about things that happened in real life is quite beside the point.


Exactly so. The false memory of St. Ronnie is a wild distortion of reality. Reagan raised taxes 11 times. [the net result was to shift the tax burden from the haves to the have-nots, but - hey - a tax increase is a tax increase.]

Peter Dorman at Econospeak has some fun playing "guess who?" with this quote"


Probably it is true enough that the great majority are rarely capable of thinking independently, that on most questions they accept views which they find ready-made, and that they will be equally content if born or coaxed into one set of beliefs or another.  In any society freedom of thought will probably be of direct significance only for a small minority.


I certainly didn't know, and I won't spoil it it by revealing the author, who you can easily identify via teh googly.

And, though I am in full agreement with this quote, considering the author, it does strike me as ranking rather high on the irony scale.

W.A.R. - The Nonsense Side of Sabermetrics

I'm all for statistical analysis.  Properly applied it helps us make sense of things that happen in the real world.  Such is the case with most of the baseball stats known as Sabermetrics.  Improperly applied, though, you get gibberish, like the category of Sabermetric statistics collectively known as "Wins Above Replacement." [W.A.R.]  You can read about it's various guises here.

The basic idea in any version of W.A.R is that you gather a bunch of statistics on a player, and use some algorithm to calculate how many more wins the team accrues because of his play, as compared to an entry level replacement just called up from the minors.

Consider the case of an offensive player.  [W.A.R. is also calculated for pitchers, but we'll ignore that.]   According to the chosen algorithm, these stats are aggregated and massaged into a single number that represents that alleged contribution to team wins for that player.   The problem is that statistics are probabilistic, but wins and losses happen in specific instances, where statistics are meaningless.

This is such a fundamental and obvious flaw, that I'm astounded that anyone even came up with the idea.

Consider the just concluded three game series with the Tigers visiting the Yankees.  Game 1, Game 2, Game 3.   In this series, Miguel Cabrera, arguably the best hitter in the game today, "went 7-for-13 with two walks and a strikeout for the series, and homered in three consecutive games, each to a different part of the field."  Also he became "the first player in history to homer off Rivera in consecutive at-bats."  [Quotes from Game 3 link.]

Quite an amazing feat for anyone at any time, and even more so for a hitter who is hobbled with a nagging hip flexor injury.  But how much did all of this contribute to wins?  Sadly, not at all.  His two pops off Rivera in games 1 and 3 were dramatic clutch hits, one tying the game and the other setting the stage for Victor Martinez' game tying blast. But in each case, the Yankees went on to pull out the victory.  In game two, a 9-3 Tigers romp, Miggy's HR was just one RBI among many.

This was great hitting overall, most particularly in dramatic clutch situations, but, alas, a wins contribution of exactly zero.

Just a few days earlier in Cleveland, Don Kelly provided the winning punch with a three run homer in a 5-1 Tigers victory.   What do you imagine Kelly's and Carbera's W.A.R. values are?

So - not only is a win the result of clutch play by an individual in a specific circumstance, it's a team result that depends not only on what the rest of the team is doing, but just as much on what the other team has done on that particular day.

What the Hell?!? Friday -- “I won’t be accepting any invitation from him in the future to go for a drink.” Edition

Linked without comment, 'cuz - really - what could I add?

Despite starting the month with a loss and returning from the all star break with a shut out loss to the Royals, the Tigers had an excellent July.  They went 18-8 for the month, after going only 14-14 in May and 14-13 in June, and are now 16 games over .500.

The July win percentage was .692.  An entire season with that win rate would yield 112 victories, the third best record since MLB went to the 162 game schedule.  By wide margins, the Tigers increased their runs per game, while cutting down opponents scoring.  This reverses the June trend, which was gong the wrong way.

Here is scoring by month for the season so far.

There are still a couple of troubling features, though, and they're the same ones that have been there all season: opponents are scoring late inning runs and the Tigers aren't.

Here is the breakdown by inning. 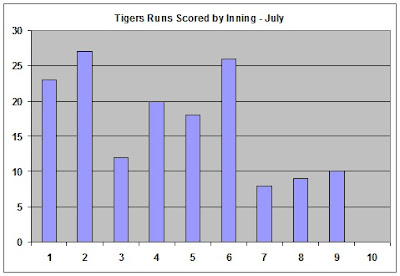 Runs have come early and often, with huge output in innings 1, 2, and 6.  But after the 6th, the offense takes the rest of the day off.  Second inning scoring is the same as that from inning 6 - 9 combined.  Only 18% of Tigers runs come in the final three innings.

This hasn't mattered because the Tigers generally win by a comfortable margin.  But it also accounts for a less than stellar record in close or low scoring games.

It's quite a different story for the opponents. 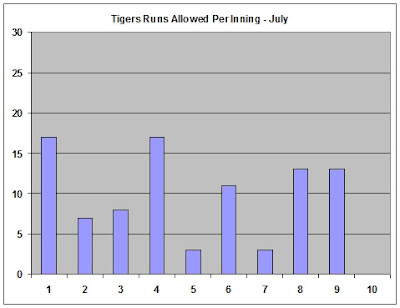 Tigers out score the other teams in every inning until the 8th, when there is a dramatic reverse.  Opponents score 32% of their runs in the final three innings.  Fortunately, though, the Tigers are putting up big totals, so this has not hurt them too badly - for now.

Here is Tigers scoring per game in July. 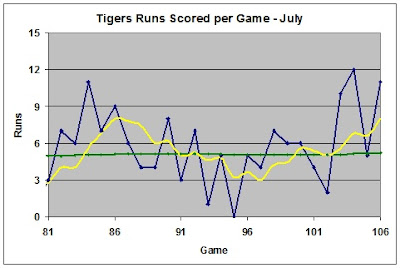 Despite the mid-month trough - which looks worse than it is because early and late run totals were so high - the season average to date has been on the rise, and is now at 5.18.  Coming into Tuesdays game, the Tigers led the league in scoring with 2 outs, bring in 218 of their 538 runs [at that time] after 2.  That's a remarkable 40.5%.

During the month they outscored their opponents 153 to 92.  That's 1.66 runs for every opponent's run.

Here are some random stats.


It's good to see the Tigers find their bats, and have things trending the right way. But they still need to score more late runs, and shut down the opposition in the 8th and 9th.

Same as it ever was.

Posted by Jazzbumpa at 10:48 PM No comments: