Posted by Jazzbumpa at 5:01 PM No comments:

This is Beyond Awesome

Posted by Jazzbumpa at 10:36 PM No comments:

What the Hell?!? Friday - Castoria

Posted by Jazzbumpa at 8:56 PM No comments:

I have an optical mouse with my lap top, but the old relic desk top in the office has a mechanical mouse with that essential tracking item commonly called a "mouse ball."  That is not what this is about.

If you ever needed a reason to eat yogurt - well, here you have it.

Posted by Jazzbumpa at 6:00 AM No comments:

Last week I posted  a couple tunes from our Up Jumped Spring Concert.  Here are a couple more.


Blue Samuel is a great Sammy Nestico tune, based on Blue Daniel, an original composition by the Motor City's own tragic trombone genius, Frank Rosolino.  Solos by Vince on guitar,  Marion on alto, Patrick on tenor,  Mike on trombone, and Ryan on piano.  Kodos to Tim for his soaring trumpet lead.  I'm really happy with the way this turned out

Howdiz Songo? is by Gordon Goodwin.  It's more tricky than difficult, but the layered complexity, especially in the ensemble section following Ryan's piano montuno, makes it quite a challenge.  I'm pleased with the ensemble performance here.  Solos by Joe on alto, me on trombone, Vince on guitar and Marion on soprano.

Posted by Jazzbumpa at 8:04 PM No comments:

Art directs us to this article at Remapping Debate by Craig Gurian, containing this graph of effective corporate tax rates and tax revenue as a percentage of GDP.   He also disputes the graph title's claim that as rates go down, so does the revenue share of GDP.  He has a point.  After about 1982, the tax revenue/GDP line never makes another new low, while the effective tax rate keeps dropping.

Let's have a close look.   In graph 1 below, I've added parallel channel boundaries and a few other details to both lines. 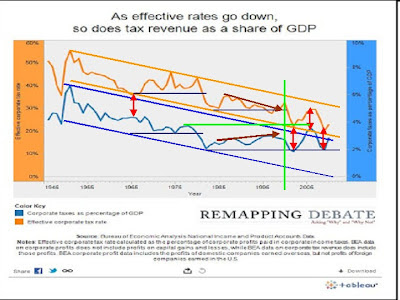 
From the high around 1950, the effective rate line travels in a well defined trend channel.   I've imposed a parallel channel on the blue line, with less than satisfying results.   In each channel we can see two areas of more or less sideways motion, underscored in black, the first in the 70's, and the next, following a drop in both lines, begins in the early 80's.

Those three details account for the major discrepancies between the two lines.  In fact, the sideways motion in the blue line since 1982 can be seen as a long, slow excursion from channel bottom to top - with a bit of an overshoot.

While lines in channels can slither in a variety of ways, two characteristics we look for in declining channels are successively lower tops and successively lower bottoms.  The orange line is well behaved in this way.  Not so the blue line, which has made no new low since 1982, instead bouncing two more times off of the 2% line.  However, the major top in the blue line in 2006 is just barely below the top of ca 1979, as indicated by the horizontal green line.

Art notes that the distance between the lines has narrowed since 1982.  However, since the 2003 bottoms, the distance has been essentially constant, as indicated by the red arrows.  (FWIW, this same gap occurred earlier, in about 1966.)  He also notes the denominator effect.  GDP growth has been slower since the early 80's than it was in the earlier post WW II decades, and this would tend to give the blue line a boost.

Though graphed together, these lines have very different scopes, as indicated by the two scales.  There is no reason for the two channels to be parallel; and, since both data sets are the resultants of many factors, there is no reason to expect them to move in lock-step over long periods.

In graph 2, I've given the blue line a slightly different channel, with parallel borders aligned to its own highs and lows.  In this view, the long horizontal trek from 1982 to 2006 is an excursion from the bottom to the top of the channel. 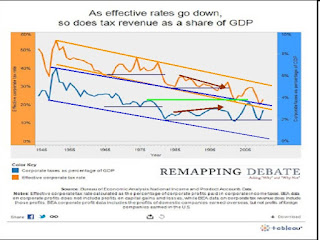 In a big picture sense, Gurian has it right.  Lowering the effective rate lowers tax revenues as a percentage of GDP.  But Art's point is also valid.   Thee has been no new low in 30 years.

I think the denominator effect that Art mentioned plays a part.  Another thing to think about is that each of these data sets is bounded, and can be effected by, a zero lower limit.  The effective rate is nowhere near it, but the revenue share percentage has been close to it during the entire horizontal period.  So the sideways trek of the revenue share line might be a data artifact caused by some sort of edge effect.  FWIW, the corporate percentage of total tax revenues has followed a similar path, and has been essentially horizontal since the early 80's.

Anyway, it will be interesting to see how these data sets continue over the next few years.