But we love the way Osgood almost stared Malkin down, staying upright as long as possible and not giving in. That's a sign of a confident goalie.

Blue!
Posted by Jazzbumpa at 11:45 AM No comments:

This nomination shouldn't be controversial. Judge Sotomayor is clearly highly intelligent and capable. She is a personal and political reflection of Obama - one with a compelling personal story, and a practical, centrist-conservative outlook.

Politically, the choice might be brilliant, not only for the obvious reasons, but also because the scorpions on the right* will have revealed themselves for what they are: "nattering nabobs of negativity."**

Imagine a slightly alternate universe, where John McCain won the presedential election of '08, but everything else is the same. Suppose President McCain nominates Judge Sotomayor for the SCOTUS. What response would you get from Rush, Newt, and Ann?

Difficult to say for sure, but I suspect they would be falling all over themselves to sing her praises. This crowd, and their followers, have neither integrity nor a coherent political ideology. They will oppose Obama wth the same mindless partisanship that they opposed Clinton. They will do everything they can imagine to obstruct and deter.

After all - what is important to the richfluegel is that Obama fails.

That is all they have. It is all they are. Maybe, as the confirmation process moves forward, another 1 or 2% of the population will come to realize that. Wouldn't a filibuster be a magnificent demonstration of their mindless obstructionism?

Johnathon Turley weighs in on the Sotomayor selection here. His critique is balanced and restrained. Does he damn her with faint praise, or praise her with faint damnation?

UPDATE
Judge Sotomayor is likely to be a disappointment to Liberals, since she is not one of them.

Greenwald gives some background, and casts the idiocy of reichfluegel objections into bold relief.

Because of her background, ethnicity and gender, hordes of people who know nothing about her and haven't bothered to examine what she's actually done as a judge instantaneously believe this caricature, while the media keeps repeating these accusations without, as usual, any critical scrutiny.

As happens virtually always, the facts are now starting to be examined and they reveal just how deliberately false are these right-wing smears. They just make things up without having any idea if they're true. Not only is that caricature of Sotomayor false, the opposite is true: if anything, Sotomayor's flaw is that she is excessively legalistic in her approach.

UPDATE 2
My, my. Ed Rollins tells the Republican party (and assorted right wing nut jobs) to shut up and go home, more or less. He also burps out a few partisan bubbles, but we'll give him that, since most of his article is sensible, and all of it appears to be well-intentioned.

UPDATE 4
From The Whitehouse:

But who cares about that kind of trivia?

Talk Me Down, Mickey Redmond

And he does.
Posted by Jazzbumpa at 11:02 AM No comments:

Posted by Jazzbumpa at 10:44 AM No comments:

A Different View of Cheney

Posted by Jazzbumpa at 9:48 AM No comments: 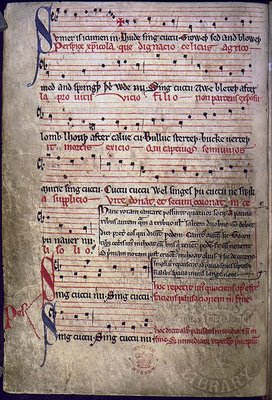 There are many renditions of Sumer is Icumin In on Youtube. This is my favorite, since it faithfully retains all of it's striking characteristics.

This is a remarkable song in many respects. Dating from the mid 13th century, it is clearly in a major key, perhaps the earliest known example of tonal music. It also features an ostenato base line, doubled in canon, and melody in canon - also possible firsts.** In all there are six distinct voices. Probably a first for that as well.*** This song anticipates later musical developments (ostenato, canon, tonality, multi-voice texture) by hundreds of years.

Here are the lyrics, per Wikipedia:

Given the cuckoo's symbolism for infidelity, I think there may be a bawdy subtext*** that the modern translation misses.

Would you please just STFU?

Your lies and delusions are an embarrassment to your party (such as it is) your country (whose most basic principles you have betrayed) and yourself (not that you matter any more, you evil insane blight on the human race.)

5/25 Update:
Also, what Matthew Alexander said.
Posted by Jazzbumpa at 10:16 AM No comments:

You decide.
Posted by Jazzbumpa at 10:11 AM No comments:

“The modern conservative is engaged in one of man’s oldest exercises in moral philosophy; that is, the search for a superior moral justification for selfishness.” –John Kenneth Galbraith

Obviously there is no golden age of conservative “intellectualism.”

Same as it ever was.
Posted by Jazzbumpa at 9:49 AM No comments:

Niall Ferguson, speaking for Neocon Economics, thinks that Obama's (overly timid in my view) Keynesian approach to the nation's economic woes is "the Soviet model."

DeLong points out Keynes' view of the Soviet model, in this excerpt (ellipses his) from Keynes' A Short View of Russia.

"Roberts’s service on the Court, which is, of course, likely to continue for decades, offers an enduring and faithful reflection of the Bush Presidency."

What more scathing indictment of Chief Justice John G. Roberts, Jr. could be offered than this simple sentence?

Quote extracted from this article by Jeffrey Toobin.
Posted by Jazzbumpa at 7:07 PM No comments: 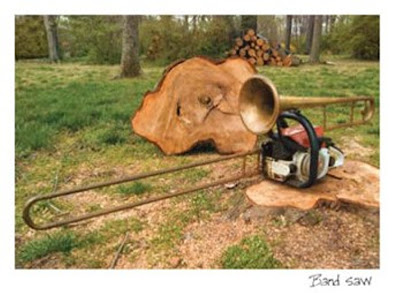 Wish I could attribute this picture, but I have no idea where it originated. Presumably a design by the MSU School of Sparty Engineering.

Tip of the hat to Kelvin and Dave.
Posted by Jazzbumpa at 10:31 PM No comments:

Nobody but Fontana could ever sound like Fontana.
Posted by Jazzbumpa at 9:15 PM No comments:

Now, this is very cool!
Credit to Urbino.
Posted by Jazzbumpa at 10:16 AM 1 comment:

MAY DAY, May Day

Oh.  Sorry.
Was suddenly overcome by a fit of socialism.
Posted by Jazzbumpa at 2:25 PM No comments: