June for the Tigers was a mirror image of May.  In May, they started the month going 13-3, then went 4-9 to finish at 17-12, or .586, which is still quite good and would project to 95 wins over a season.  But the doldrums continued well into June, which started off at 5-11.  But things suddenly turned around and they went 9-2 for the rest of the month, finishing at 14-13.  This is a barely respectable .519, and would project to only  84 wins over a season.  That might not even be good enough for a wild card.

The graph shows win percentage and projection after each game of the season. 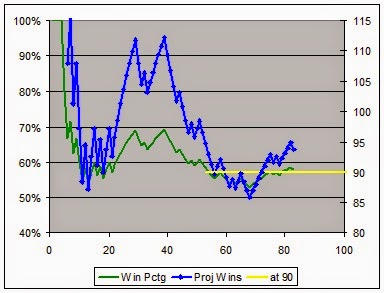 Here are batting averages after the July 4th loss to Tampa Bay.

Here it all is in one busy picture. 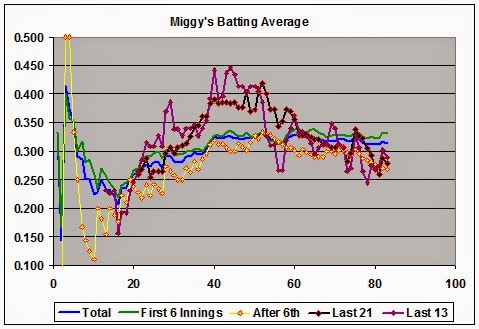 After game 83, the Tigers still sit atop the A.L. Central, 4 games up on the Royals and 8 ahead of Cleveland, with 2 games in hand relative to each of them.  This season can end well, but lots of things will have to go right, and hitting with run production from Cabrera will have to be a big part of it.