I came into this season with a lot of optimism.  Verlander, Victor, Miggy, and Sanchez are all healthy for the first time in three years.  Green had his hand problem repaired.  There is a credible relief staff for the first time in many years.  Last year the Tigers were close to first in batting average, but only 10th in runs scored.  This seems like an anomaly that couldn't be repeated.  J.D. is the real deal.  I'm looking for Castellanos to have a break out year.   Justin Upton is an upgrade in left field, and should add some punch.  Free Press sports writer Drew Sharp declared this a 3rd place team, but I think he is dumb.

Here are the individual batting stats.


Neither Cabrera nor Upton has contributed much as yet.  When they get going, this offense should be terrorizing opposing pitchers.

Here is scoring by inning. 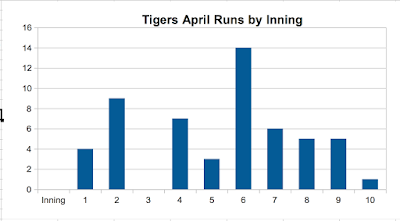 Here is opponents scoring, on the same scale as the Tigers'. 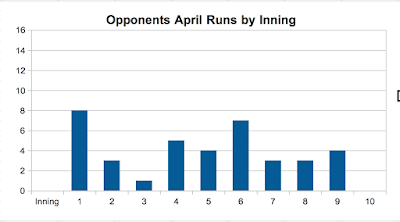 Starters are having early problems.  Relievers have been decent.

On the defensive side, Tigers lead the A. L. with 1.7 double plays per game - a stat that has been enhanced by 5 turned in the last two games at Houston.

So far so good.  But the White Sox and Royals are both 8-3.  So the Tigers actually are in 3rd place.

Posted by Jazzbumpa at 11:21 AM No comments: