Christians Without Jesus - It's a Thing

3/31 Update:  Full disclosure -- I'm not much of a believer; but my lovely wife and I have found a church that we like.  The message is positive and accepting, the sermons are thoughtful and thought-inspiring, I've gotten deeply involved in the music program, and I absolutely love the people there - as individuals and as a community.  For the first time in my life, I'm enthusiastic about going to church!

This mural is in the narthex, right by the front door.  This, in my not so humble opinion is doing Christianity the right way. 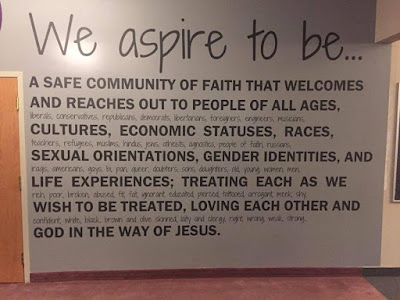 How all this happened is a story for another day. What I want to talk about now are walls.  They are the sermon theme for this Lenten season, and today's was about the walls we all build that separate us from each other.  Walls built around geography, race, politics, gender, gender identity, social status, and economic position.

What didn't get mentioned are the walls due to religion.  The ones between Christians and Muslims, Jews or non-believers are pretty obvious.  But there is also a high and thick wall within Christianity, separating the conservative [or as I think of it, regressive] and progressive approaches.  Roger Wolsey does a deep dive into this in his book Kissing Fish, which has informed a lot of my thinking.

Below is a thing that happened on Twitter on Friday evening.  John Pavlovitz, in case you don't know of him, is a progressive Christian writer who I follow and respect.  Both he and Wolsey get a lot of flack from regressives who accuse them of heresy, when they are simply relating the clear and obvious message of Jesus. The exchange below illustrates what the wall within Christianity looks like. 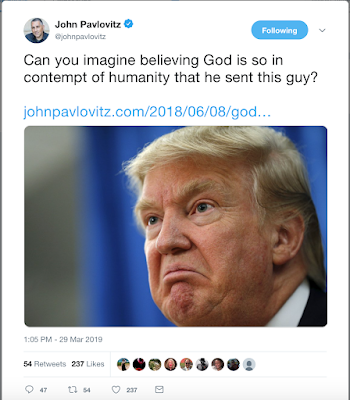 Here is the article linked in the above tweet.

First response I saw was from this guy - 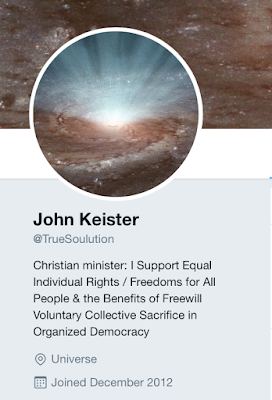 Christian minister.  This was his response.

JK: You perverse filthy hypocrite: If you knew anything about the Scriptures you would Know that GOD does hold humanity in contempt: & that every leader on earth, whether Good or bad; is put in place By Him.

I don't know if there is some prior history between the two Johns, but the viciousness of this attack, right out of the box is nothing short of stunning. Intrigued by this, I responded.

Really - this is fascinating.  I'll wait.

Me: I'm especially interested in how you deal with --

"So God created mankind in his own image, in the image of God he created them;"
and
"God saw all that he had made, and it was very good."

These lines are in Genesis, in case you need help finding them.

JK: Way too much work for an account with only 71 followers: Provide the Scriptures That challenge what I said; or do the work yourself: I don't owe you anything troll

Me: Your measure of worth - Twitter followers?
I provided those scriptures in my follow up comment. It's clear in Genesis. Read it.
You, sir, are exactly why people are leaving the faith. They are not inspired by your message of hate.
You are the troll.
May God have mercy on you.

Me:  Translating John Keister: My hateful opinion is contrary to scripture. I can't defend so I'll hope that nobody notices.
Not a good look, John.
Translating me:
Sorry John - we are noticing.  Me and all 71 of my followers - 70 thoughtful people and one smart dog.
God's mercy on you.

Responses on Twitter get non-linear.  I'm piecing this together as best I can.

JK: The First Message Of Jesus Is: You're eternally damned to everlasting death: Confess & Repent Of your sins: Only then Shall you Be Saved  *

Me:  Fake?  On what do you base that?  Your prejudice?
You memorize verses but have no understanding.
Jesus teaches love and you spew hate.
I am educating myself, with hope and humility.
I don't think you can make that claim.
You're the fake. You know words, but you don't know Jesus.

Me: Sorry - I ran out of space to offer a blessing.

I hope God softens your heart, opens your mind, and frees your spirit so you can see that judging is God's business; and that love, inclusion and acceptance are your business. Sheep and goats, amigo.

May God have mercy on you.

JK: Unlike you, I Know Every Scripture In The Bible & Understand most of them: & On Judgement Day you're not going to blame your sins on me hypocrite: #ForTheRecord I Speak for GOD, not you

Me:  Oh, blah, blah, blah. You know nothing abt me, let alone hypocrisy. Nice projection BTW. What you've shown here is that you are prideful, arrogant, hateful, judgmental, and deeply un-Christlike.
The message of Jesus is clear: love and forgiveness.
Go read it.
May God forgive you.

He has the right wing trifecta in spades: projection, tone-deafness to irony, and a stunning lack of self awareness.

He might think he's won by muting me, but all he's done is run away and hide.

It's pitiful. I'm sad for him.

TiredSouthernLibtard interjects -
You might wanna bow out of this thread *Pastor Keister* - you're sorta kinda getting owned...

JK:  Pay attention: My GOD Has Owned everyone in this thread: You're nothing

TSL: And Christ be with you as well. I - like all of us - was created in God's image - so I claim FAR from nothing. ☺ Thank the Lord I was never exposed to a *minister* such as yourself. wow

JK: You pathetic hypocrite; you tweeted💩 @ me first: Beat it: You got schooled #Seeya

Me: I guess the minister has forgotten his wonton attack on @johnpavlovitz at the top of this thread.  No self-awareness.

* Me, in a later response:
I really want to see this verse.  Too bad he's muted me.

What I didn't realize in real time is that this: {Genesis 6: 5+11} were the verses he meant. Here's Genesis 6.  God regrets having created us.  Once we were good and now we are nothing but evil. You'd think an all-knowing, all-powerful God would have had a clue. But that's the Bible for you - chose the passages that seem to support your point of view. This is in the Jewish part of the Bible, and I never hear Jews speak this way.  Haters gotta hate, though, and here is their scriptural support. It's conservative [and false] Christianity at its worst.

There's more between JK and TSL, and lots of other comments from other posters, but you get the idea.

It's kind of fun, in a perverse way, to jab the hornet's nest and find there's nothing in it but a slug. But this whole thing just made me sad.  What this minister [?!?] puts forth is such a hateful perversion of the message of Jesus, that reading his words leaves me in despair - not just for Christianity, but for the whole human race.

Here's Luke 13: 1-9.  It's kind of about repentance, but also kind of about fertilizing your fig tree, avoiding discouragement, and best of all - hope.  Where John Keister sees a negative message of despair and cruel judgement, I see a positive message of hope of and redemption.  What do you see? 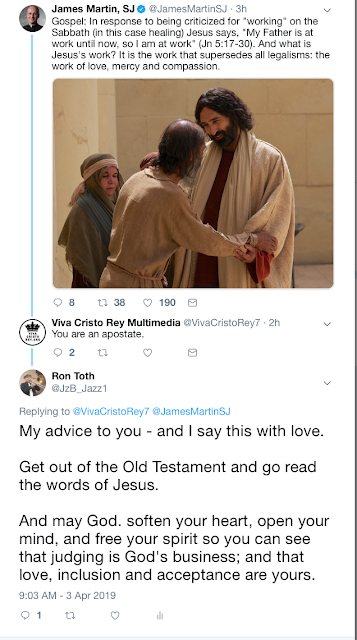 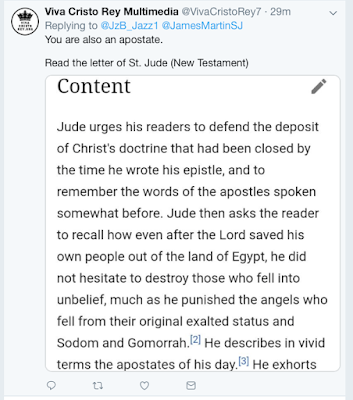 It just keeps getting worse.