Who Am I in My Own PoV? Thoughts on Theon Greyjoy

Mark has a pessimistic look at the Log of the Industrial Production index and sees a curved, and flattening, trend channel.  It's a good fit, but I see it a bit differently.  The Data set goes back to 1946, and the measurements follow a perfect linear trend channel through late 1981. 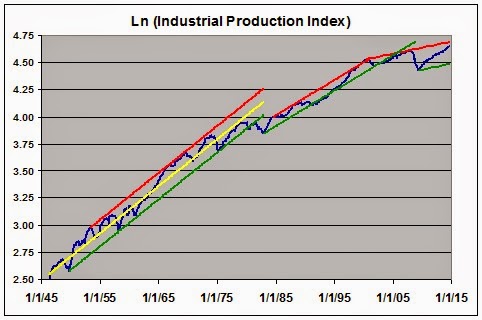 You can always divide a curve into a series of straight line segments.  But when the first segment is half the data set, you have to give it some credence as the trend candidate.

Note also that when the trend fails, it fails at the mid line of the channel.  This happens commonly in all sorts of data sets.

After a decline into early '83 pierces the former lower boundary, a new upward trend with significantly lower slope developed.   This channel was also much narrower than the previous one.  The inability to sustain vigorous growth is yet another anemic manifestation of the Great Stagnation.   This trend failed by starting a decline from the top channel boundary in late 2000, then dribbling along the bottom boundary for about 3 years.  No surprise, since the first decade of the century was marked by the closing of 10's of thousands of factories.

The top in 2000 might have been the start of a new trend, and I've indicated it as such.  It's still slanting up, though at a very weak slope.  Since the bottom in 2009, production has made a comeback, rising with a slope slightly greater than that of the '83 to early naughts trend.  It's approaching the upper bound of the presumed current trend channel on both my graph and on Mark's.

Whether you prefer Mark's vision or mine, a test of the upper limit is coming soon.  But with the economy at the effective demand limit, I see very little chance that the upper channel boundary will be breached.

Thoughts on the Royals

I did a little Google questing this afternoon.

Five incidents in 20 years, so not at all rare.

This year the list will grow, since the Royals and the Giants were both wild card teams.

This has only happened one other time, in 2002, when the Giants and Angels met.  They were 95 and 99 game winners, respectively.  This year's contenders were both sub-90 game winners, so this outcome has to be considered a bit of a fluke.

I doubt that any team in any sport has ever fluked its way into a championship series like the Royals did this year.  They were down 7-3 to the A's in the 8th inning of the single wild card playoff game, scored three, tied it in the 9th, gave up a run in the top if the 12th, and scored 2 to win in the bottom, 9-8. Exciting - sure, but a bit too story-book for the real world, I'd say.

Three extra-inning wins in a row says something about your bull pen, but even more about luck.  In the regular season the Royals scored 4.04 runs per game, 14th of 30 MLB teams.  In the post season, they've outscored everybody with 42 runs in 8 games, for a 5.25 average.

Alcides Escobar has hit 16 regular season home runs in 4 full years with the Royals.  He knocked one out for the first run scored in the Orioles series.  Mike Moustakas, whose offensive stats have declined in each of his 4 years with the Royals, has hit 4 HRs in the playoffs, in 32 plate appearances, 1 in every 8.  In the regular season he had 15 in 500 PAs, 1 in every 33+.

The Royals have a decent rotation, above average defense, and perhaps the best bull pen in MLB.  What they do not have is offense.  Up until these playoff games.

There is no rational explanation for the Royals post season success.

One might suspect divine intervention.  But this is baseball, and I consider it far more likely that someone has made a pact with the devil.
.
Posted by Jazzbumpa at 4:51 PM 1 comment: