I post an update of the Dow Jones Industrials every business day on my Face Book page. Yesterday's was long and, I think, meaningful, so I'm reposting it here.

Except for a brief bounce of about 100 points between 2:30 and 3:00, the rest of the day was down. The image of an avalanche springs to mind. The lo - a mere 42 points below the close - occurred only 4 minutes before the end of trading. The day’s total span was 595 points, and it all occurred after 1:45.

This was a dramatic reversal in the last 2 hours. I actually felt hopeful around lunch time Today’s hi was the highest since the pop above 27000 from 6/05 to 6/10. A glance at Graph 1 shows that recent action is now the second sideways move of more than a month’s duration since the 3/23 lo. This does not look like any kind of impulsive upward move.

The red and orange horizontal lines represent the Fibonacci .681 and .786 retracements of the drop from the Feb 12 hi to the March 23 lo. 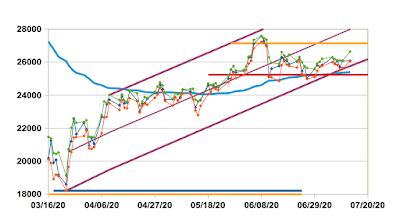 
The only practical alternative view is that this is an unusually long and extraordinarily complex counter current move - the the main thrust being down, shown in Graph 2. The Index is moving into a trend line wedge where something will have to give pretty soon. Graph 2 - Into the Wedge


In Graph 2, the peak on June 8 defines the top border of a potential down-sloping channel from the 2/12 hi that is a stunning 10684 points wide. If this concept has any validity, it could lead to an ultimate lo far below the 18214 reached on 3/23.   In 1929, the Index lost something like 89% of its value. Can you imagine the DJI30 Index bottoming at about 3000? It needn’t be that extreme to be devastating.

The Fibonacci 61.8% loss at 11293 is in the broad range of round number support from the last few of those mentioned. So the range from 10000 to 13000 is a reasonable target for the ultimate low, which could happen this year or off a few years into the foggy and unpromising future. 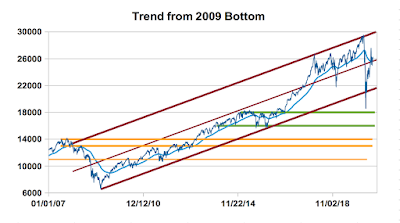 
The effects of the corona virus on the population and the economy of this country are going to be far worse than what we have seen so far, due to the abysmal denial and mismanagement of donald j trump and his corrupt minion governors in republican controlled states. Some are starting to realize it now, but what they are doing is far too little and far too late. Tragically, this devastation was largely preventable, as a few nations like New Zealand have shown. Even here in Michigan, where Gov. Whitmer has tried to do things right in the face of organized and intimidating armed opposition, we have been trending the wrong way for almost a month. Can you guess why?

Stocks are at an epic level of disconnect from the underlying economy - which is weakening as you read this. When this situation rights itself, the spring-back will overshoot, and probably by a large margin. That will be the time to buy.