Here is a running list of my 2013 posts at Angry Bear, newest at the top.

On Saturday Mish wrote an almost unbelievably stupid article with those words in it's title.

The article borrows these words and includes a quote from an even more unbelievably stupid article by Austrian school economist and author Detlev Schlichter.  Part of that quote is presented here.

What makes him [PK] so annoying is his unquestioning, reflexive and almost childlike enthusiasm for state intervention, even in the face of its obvious failure, and his apparent unwillingness to probe any deeper into the real causes of our present economic problems or to show any willingness to investigate the effectiveness or ineffectiveness of his particular medicine.

Wow!  Does that sound anything like the Paul Krugman who puts his ideas out there for the world to see on a daily basis?  When the opportunities smack me in the face like this, I put on my Krugman Truth Squad hat.  You have to wonder if Herr Schlichter has ever bothered to read anything that Krugman has written.  His article - which I cannot recommend highly enough - is an impressive exercise in half-truths, distortions, make believe, and straw man stuffing, seasoned with more than a soupcon of bovine excrement.  [As an ironic aside, when I was an impressionable youth, it was the fuzzy-headed liberals - aka commie-sympathizing leftist pinko radicals, who were alleged to operate in that manner -- but that was the 60's and I digress.]

Though this statement [emphasis added], "Krugman is the one who should be made to explain his policy recommendations and who has to answer the criticism that policies like the ones he is recommending got us into this mess in the first place and that his policy ideas have been implemented for years to no effect, at least no positive effect." is hard to beat for sheer negation of reality, the real capper is this: "Krugman is practicing Keynesianism as a religion."

It is because of statements like this that I lose patience with people who use words like "disingenuous."  Schlichter is either bloviating from a state of abysmal ignorance, spouting nonsense that exists only in some delusion-based distortion of reality, or simply lying.  The proof is in Krugman's Op-Eds and blog posts, where he repeatedly demonstrates reality with graphs and tables, shows how austerity is failing right now with real-world examples, and admits it when he gets something wrong.  When is the last time you saw a Krugman-hater do that?

I guess I should also mention that, in my most humble opinion, the ever-so-devout Herr Schlichter is projecting.

Mish, to his eternal discredit, says of this nonsense: " Moreover, it appears to be 100% accurate."

But, Mish continues, the real way to debate Krugman is demonstrated by Economist Hans Hermann-Hoppe in this one minute video.

This is genuinely awesome.   That an economist can be so thoroughly wrong - wrong in general and wrong in every particular - about what Keynesianism is and does, leaves me speechless, and that's saying something.

OK - almost speechless.  Forget the trivially unimportant technical details and ask simple-minded, allegedly probing questions that are totally unrelated not only to the policies Keynes and Krugman propose, but to anything else in the real world, and then point and stare when these questions cannot be answered - by anyone, while your minions nod approvingly.

But would it work?  Mish concludes this way:

Krugman would respond with incomprehensible gibberish "for wonks only" as well as typical Keynesian nonsense about how paying people to dig holes and other people to fill them up would start a chain reaction of growth.

A child would see the answer was preposterous, but not a trained economist, politician, or brainwashed academic. Paul Krugman, keynesian economists in general, politicians wanting a free lunch, and most academics are all incurable.
Nonetheless, Hans Hermann-Hoppe's answer is indeed the correct one. By asking questions a child will understand, some non-brainwashed people will see Keynesian and Monetary stimulus for what they really are: economic stupidity.


Setting aside for the nonce Mish's apparent inability to distinguish between monetary and fiscal stimulus*, at this point it looks as if he - with his straw man army and blatant intellectual nihilism -  and I have devolved into a schoolyard game of calling each other stupid.  But I'm quite sure Mish is not stupid, and I'm fairly certain I'm not either.  The real questions are these: who is paying attention to reality, whose policies make things better or worse in a given situation [absolutism, anyone?] and whose concepts have had some predictive power over the last several years.  [Here's a hint: it's not the Austerians.]

So, maybe a better way to phrase it is, "Who is practicing their economics as a religion?"

Another look at Spending and Revenues

How many times have you heard Boehner, McConnell, Ryan or one of the legion of right-wing talking heads say, "We don't have a revenue problem, we have a spending problem?"  I refuted that lie repeatedly in this AB post and at the included links.   But this is one of those zombie ideas that simply will not stay in the grave.

Therefore, some prominent voices have found it necessary to sing out again against the lie. I will add my humble quavery baritone to the chorus.

Here in Graph 1 is Kevin Drum demonstrating how Real Government Expenditures per Capita have changed under the last three presidents.

What we have isn't a spending problem. That's under control. What we have is a problem with Republicans not wanting to pay the bills they themselves were largely responsible for running up.

By using real [inflation adjusted] and per capita numbers, Drum has introduced a couple of denominators.  Real expenses per cap is a rational way to display the data, but not the only way. So lest someone cry out about that ol' devil denominator, let's have a different look. 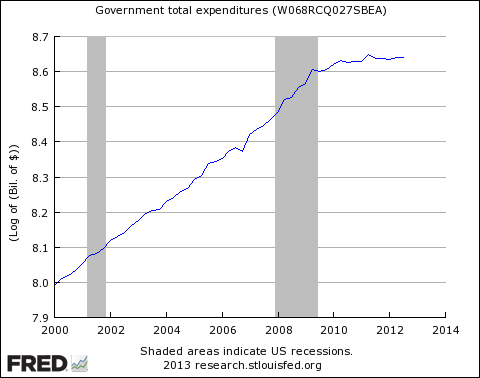 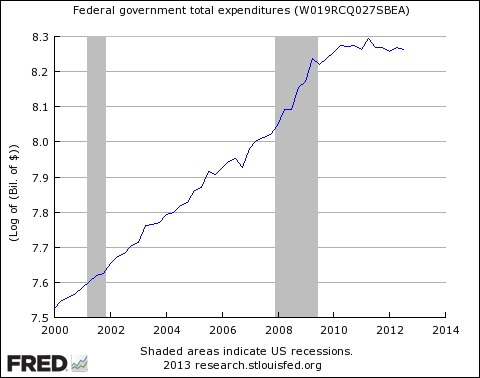 Yes, you can argue that spending was growing too fast under Bush, although it’s funny how few deficit scolds saw fit to mention that at the time. Or you can say that you just want less spending, although as always people who say this tend to be short on specifics. But the narrative that says that spending has surged under Obama is just wrong – what we’ve actually seen is a slowdown at exactly the time when, for macroeconomic reasons, we should have been spending more.


Remember, a log scale represents constant growth as a straight line, and zero growth as a horizontal line.  So, in pure dollar numbers, spending hasn't quite declined, but it has stagnated to almost zero growth.  Hence Drum's decline in inflation adjusted, per capita terms.

In Graph 4, we get one more longer range look, using Krugman's data series, this time on a linear scale.  Also presented is the difference between the two, which is the amount of spending by state and local governments. The red line is total spending at all levels of governemnt, the blue line is federal only, and the green line is the difference, state and local spending.  Note that the green line flattens early in the recession

To bring things full circle, Graph 5 shows Federal Government current receipts.  Look at this and tell me we don't have a revenue problem. To drive this point home, Graph 6 shows Federal Receipts as a fraction of GDP.  The purpose of the ratio is to provide context, using GDP as a proxy for the size of the economy. Graph 6, Federal Receipts as a fraction of GDP

As you can see, revenues/GDP are in a historically low range.

Conclusions:
- Federal spending is flat in nominal dollar terms.
- Federal spending is declining when adjusted for inflation and population growth.
- Federal revenues are far below trend lines based on any historical reference you chose.
- Federal revenues as a fraction of GDP are historically low.
- The Republican claim that we have a spending problem not a revenue problem is simply a lie, on both counts.
- Disproportional spending growth has only occurred under two presidents: Republicans Ronald Reagan and George W. Bush.

Why do Republicans lie?

The truth is hostile to their agenda.  PK Explains.

Hagel for Secretary of Defense

I'm actually agnostic on this choice.  The always excellent Charles Pierce makes a good case for Hagel, but why should Obama go for any Republican?  This just continues to promote the canard that Republicans are somehow stronger or more capable on defense issues than Democrats.

The irony here is that the greatest opposition is coming from Republicans, some of whom have gone so far as to call him an anti-Semite*  because he has spoken openly and honestly about the excessive influence the pro-Israel lobby has on American foreign policy.   When we consider the pros and cons of any individual for any position, we ought to do it on the basis of real qualifications and real disqualifications, not make-believe nonsense put forward by neocons and the cadre of rabid right-wingers whose policies have done such great and possibly irreparable damage to the world in this century.

Vertigo, nausea and angular momentum aside, this appointment is the president's decision, and I want to see the debate precede along substantive rather than ideological, illogical or untruthful  lines.   And I most particularly don't want to see him get Riced.

Now, where do I pick up my pony?

*  Update: On 1/07 I heard Eliot Abrams do exactly that in an NPR interview.  Abrams was an Iran-Contra cohort of Paul Wolfowitz and Oliver North.
Posted by Jazzbumpa at 9:14 PM 5 comments: