Jim Kwack cites Milton Friedman with the idea that inherited wealth should be taxed at the same rate as regular income.   Given a modest exemption - say a few million dollars, to avoid destroying family businesses - I concur.

I'm not sure I believe Friedman when he says this, though.


The man who is hard working and thrifty is to be regarded as ‘deserving’; yet these qualities owe much to the genes he was fortunate (or fortunate?) enough to inherit.”


This deterministic idea gives the individual no credit at all for his own hard work and dedication, and implies that twins should be equally hard working and "deserving."  Even more insidiously, though, it enables thinking about the unsuccessful in terms of a stereotyped notion of hereditary laziness for those inheriting less fortunate genes.  Down that road lies eugenics.

The lucky sperm club notion does have merit, though.  Not in terms of abilities but in terms of financial stability and backing, educational opportunities, network connections, access to health care and numerous other intangibles.

I have a different take from Friedman, more along the lines of the ideas expressed in comments to Kwack's article by Charles Broming.   Luck - and not of the genetics dice-roll type - plays a huge and generally unrecognized roll in the success or failure of any endeavor.  Two identically talented and ambitious entrepreneurs can set up identical businesses on the same day and one might succeed while the other fails due to either completely random factors like the weather, a change in traffic patterns or gentrification, or some other uncontrollable external factor; or due to unequal opportunities like available financing, suitability of location or a variety of other luck-related circumstances.

Two identical baseball pitchers can have widely different results due to the park they play in, the quality of the defense behind them, and the run support given by their own offense.   This barely hints at the notion of unequal opportunities.

Beyond that, there is the fact that rewards are not distributed linearly with respect to outcomes.  In fact, reward levels can often be quantized.  This, from the world of pro golf, is illustrative.


The difference between making it back onto the tour and being demoted to the Nationwide might only be a couple of dozen golf shots over the course of a season, but the financial repercussions are huge. Prize money on the Nationwide is only about 10% of the tour’s. Last year’s top moneymaker on the PGA Tour, Luke Donald, made $6.7 million on the golf course; the top player on the Nationwide Tour made $414,000. Most Nationwide events are not televised, and endorsement deals are one-third as big, if not smaller. If playing on the PGA Tour is like having your product stocked at Wal-Mart, competing on the Nationwide is like selling through a regional supermarket chain.


I firmly believe that a more equal society is, generally speaking, better than a society characterized by stark and growing inequality.  Whether this notion is supported by brute economics or not; a humane consideration of quality-of-life issues for the have-nots influences the equitability and stability of society in numerous non-trivial ways.

All of this lends support to my belief in high inheritance taxes and a steeply progressive income tax.

How Mythical is Reagan's Debt?

J. W. Mason makes the excellent - and largely unrecognized - point that the great majority of the federal debt increase during Reagan's term was due to high interest rates rather than a combination of reduced taxes and high spending.  Fair enough, but I think he takes this observation too far when he says:


If something everyone thinks they know -- Reagan's budgets blew up the federal debt in the 1980s -- turns out not be true, it's worth pointing out. Especially if you thought you knew it too.


However, it's also worth pointing out that Reagan's budgets really did blow up the federal debt - high interest rates at the time just made this a whole lot worse.  J.W.M. is looking at surplus or deficit as a % of GDP.  Conclusions based on ratios always make me want to take a different look.   There may not be much distortion from a denominator effect in this specific case, but a close look at the primary budget [total budget less interest payments] results tells a rather different story.

Graph 1 [click to enlarge] illustrates the total budget Surplus or Deficit [red] along with the primary S or D [blue] for the years 1950 to 2000, in billions of dollars. 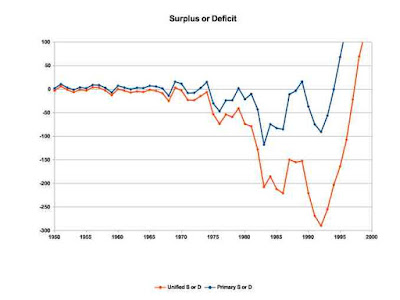 For the period in question, this does not look substantially different from JWM's graph, with data as percentage of GDP.

Graph 2 shows only the primary budget surplus or deficit for the same time period. 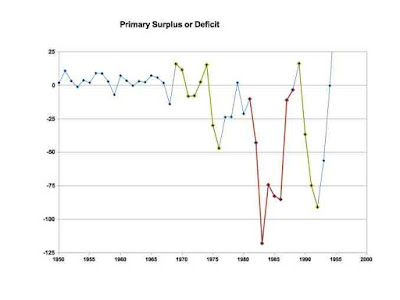 Cutting across this a different way, Graph 3 shows the accumulated S or D since 1950, in billions, with Reagan's term highlighted in red.  Reagan is responsible for 86.47% of total primary deficit accumulation from 1950 through the end of his term. In fairness, Reagan's last two years added very little to the accumulated deficit.  But there is no denying that his profligacy was dramatically different from that of any previous president.

Despite my perhaps niggling disagreement with JWM, his post is well worth reading, and I recommend it highly.  His point about interest rates is just as relevant to today's situation as it was to circumstances three decades past.  Here is his closing thought.

If high interest rates and disinflation drove the rise in the federal debt ratio in the 1980s, it could happen again. In the current debates about when the Fed will achieve liftoff, one of the arguments for higher rates is the danger that low rates lead to excessive debt growth. It's important to understand that, historically, the relationship is just the opposite. By increasing the debt service burden of existing debt (and perhaps also by decreasing nominal incomes), high interest rates have been among the main drivers of rising debt, both public and private. A concern about rising debt burdens is an argument for hiking later, not sooner. People like Dean Baker and Jamie Galbraith have pointed out -- correctly -- that projections of rising federal debt in the future hinge critically on projections of rising interest rates. But they haven't, as far as I know, said that it's not just hypothetical. There's a precedent.

Here is a picture of my mother [standing] and her twin sister last month on their 94th birthday. 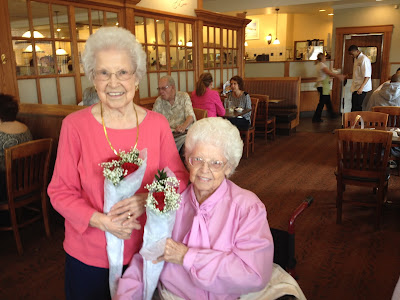 On the morning of June 2nd she suffered a stroke.  After a week in the hospital, where she declined severely, it became clear that there would be no recovery.  On the advice of several doctors, we moved her into a hospice facility for comfort care.

As of now, she is still there, totally unaware and unresponsive.   There are supposed to be 7 stages of grief, but I must have leapfrogged a few.  I got to acceptance very quickly.  But this is still sad and very painful.

This is a beautiful location, and that helps a little bit.

The last three pics are of a great blue heron.  I was very lucky to get him in flight. 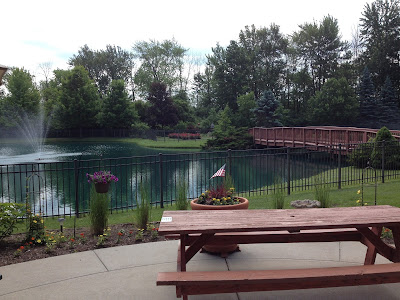 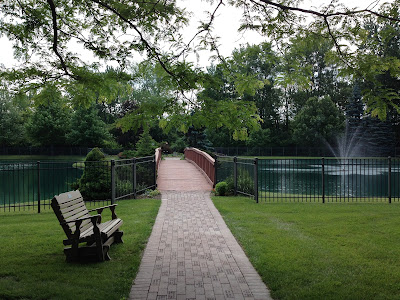 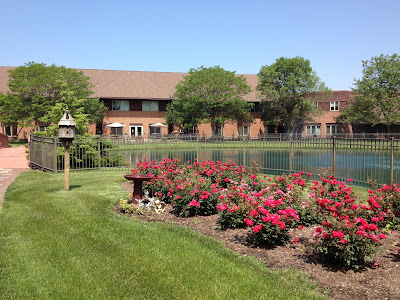 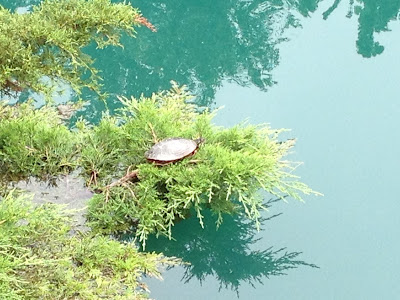 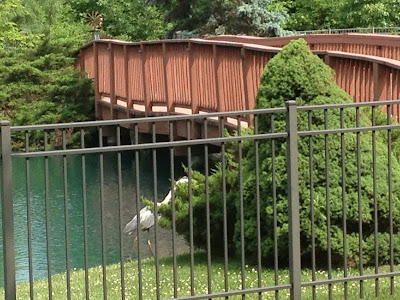 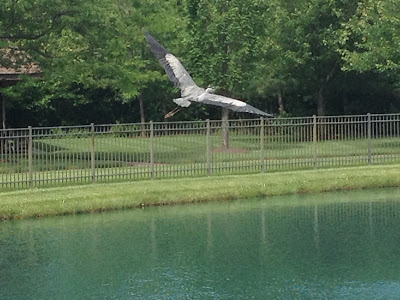 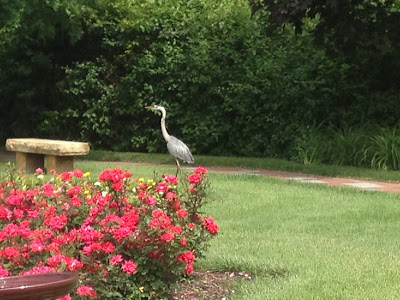