One From the Krugman Archives.

Alan Simpson is "this cantankerous, potty-mouthed individual, who evidently feels not a bit of empathy for those less fortunate."

In other words, a crank and a sociopath.

Posted by Jazzbumpa at 3:01 PM No comments:

David Brooks is an idiot.

On further review, it's not all.  Some piling on


Posted by Jazzbumpa at 1:42 PM No comments:

Labels: can you believe this shit?, criticism, economics, snark

Here are some Tigers pitching stats, after last night's game.

When Verlander has the highest ERA on the starting staff, and is 4th in K/9, I'd say things are going rather well.

Coke pitched a 1-hit scoreless 9th in Boston last night.  If he can keep turning things around, the future will look very bright, indeed.

Posted by Jazzbumpa at 5:08 PM No comments:

Tigers have the day off, and I have a jam packed weekend, so now, with a few spare moment I'll make a brief update.

Looking at May only, for these 13 games the Tigers are averaging 5.54 runs per game, while giving up only 2.77 - an astounding 2.77 run differential.  Coincidentally, the Tigers have exactly doubled up on their opponents' scoring during the month.

Graph 1 shows Tigers scoring by inning, for May (blue) and for season to date (red.) 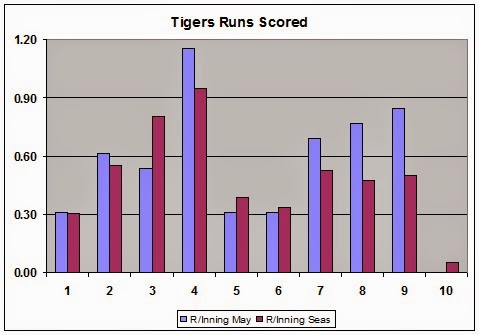 The strong 4th inning has gotten stronger, at the expense of the 3rd.  The good news is how late scoring has picked up.  Other innings haven't changed much.  There have been no extra inning games so far this month.

Graph 2 shows runs allowed per inning, for May and for season to date. 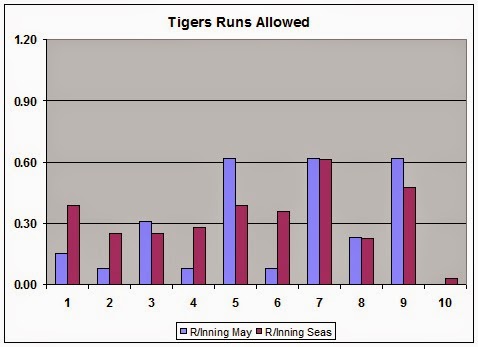 Note these two graphs are on the same scale.  That in itself shows how dominating the Tigers have been.

Their 24-12 record (.667 win percentage) is the best in the majors, and projects to 108 wins for the season. They've played the fewest games of any team in the majors, with 3 to 6 games in hand relative to their division mates.  Interestingly, the allegedly weak A L Central as of Monday was 24-14 against the allegedly strong A L East.

Tigers are in Boston for 3 this weekend, then move on to play 3 against division rival Cleveland. After that, the Rangers are in town for 4.

I'll have more detail at the end of the month.

Posted by Jazzbumpa at 11:30 PM No comments:

In the 3rd game of the season, Miguel Cabrera went 4 for 5 with a home run and 3 RBIs.  But by game 16, all his stats were at all time lows.  Since then, he's recovered dramatically.  Here it is in a couple of graphs. 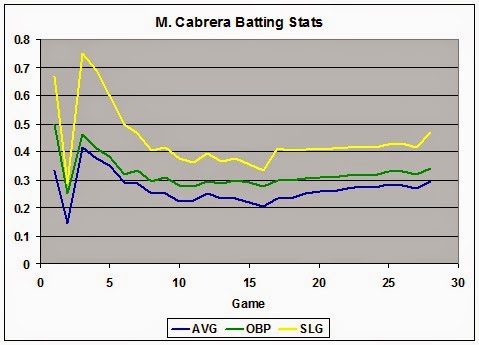 This vertical scale is compressed to accommodate the high slugging average after game 3, so the impressive batting average increase from .206 after game 16 to .293 after game 28 doesn't look as dramatic as it should.  But note how slugging stepped up after game 16, and actually kept slowly rising from that point.  In game 28 last night, he had a double and a home run, so slugging moved up another notch to .466.  It will be interesting to see if he can maintain this apparent higher level.  This should happen, since he finished last year with a slugging percentage of .636.  This included a dramatic decline at the end of the season when he was injured.  Slugging for September was a sluggish .313, dragging the season number down from .688 on August 26. This year, his 4 home runs to date equal last years total after 28 games, but then he hit 2 in game 29 on May 3rd at Houston.  There is still a lot of room on the upside.

Graph 2 shows batting average, overall, with a split after inning 6, and for the last 8 games. 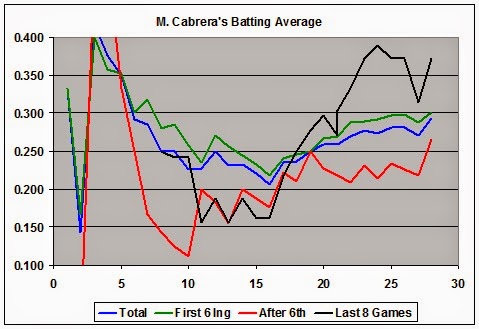 Never mind the early games, here I've expanded the scale a bit to put more emphasis on the improvement since game 16.  The big jump is most noticeable in the black line, showing average over the last 8 games.

As the red line indicates, late inning performance lags overall performance.  But here's something amazing.  Overall, He's achieved 23 RBIs on 34 hits, an RBI for every 1.48 hits.  Through inning 6, it's an RBI for every 2.00 hits.  After inning 6, it's an astounding RBI for every .900 hits.  Late in games, when his batting average is lower, he has more RBI's than hits. That is some gonzo clutch hitting.   For perspective last year he had 137 RBIs on 193 hits, or 1.41 hits/RBI - not far off from where he is this year to date.

Based on the last 8 game numbers, it looks like Cabrera is back at, or close to, last year's mid-season form, before the injuries dragged him down.

If he can stay healthy, the future of this season looks pretty bright.

Posted by Jazzbumpa at 1:33 PM No comments:

What is a Good Batting Average?

I think we'd all agree that .300 is a good batting average, and that .200 isn't.   Also, that 280 is pretty good and .220 is pretty poor.  But where do you draw the line?  Let's say that a good batting average is anything above the mean for the league in that year, and the degree of goodness is defined by the difference from the mean.  Similarly, poor batting is hitting below the league mean.

Fortunately, mean batting average data is available at Baseball Almanac, going back to 1901, so the comparisons are easy to make.  "These totals include every player, every at-bat and every hit during the season listed."

Graph 1 shows the mean batting average for each league from 1901 through 2013. 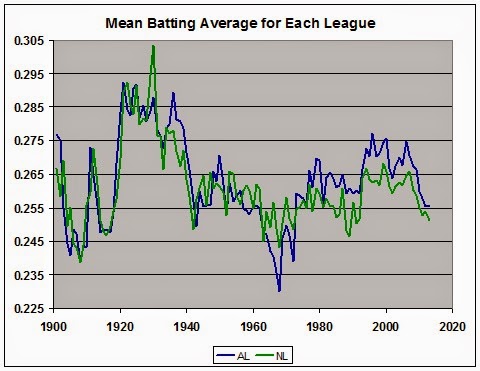 There have been some pretty big changes over time as the tide shifts in the battle between hitters and pitchers.  Within the broad sweeps, there are also year to year variances that tend to run more or less parallel in the two leagues.  So, in general, whatever is happening, happens in both leagues. 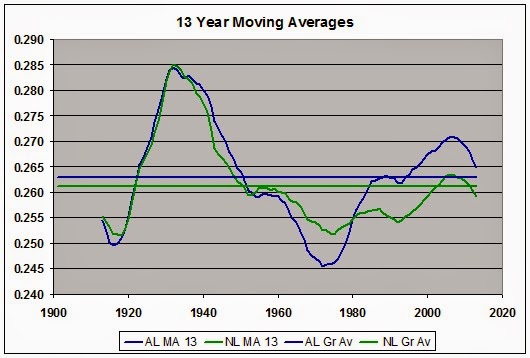 This clarifies two things - times when either pitchers or hitters were gaining on the other, and times when one of the leagues had either better hitting or better pitching.   Batters became increasingly more dominant from the mid 19-teens through the early thirties.  Then pitchers took over until the early to mid seventies.  Afterward, batters gained ground until 2007.  That trend may now be reversing.

Back in the early days, the performances in the two leagues was, in gross terms, nearly identical.  There were big differences between the leagues in individual years, but a lot of year-to-year flipping eliminated dominance by one league over the other.  Since about 1950, there have been some robust separations. Graph 3 shows this in detail. 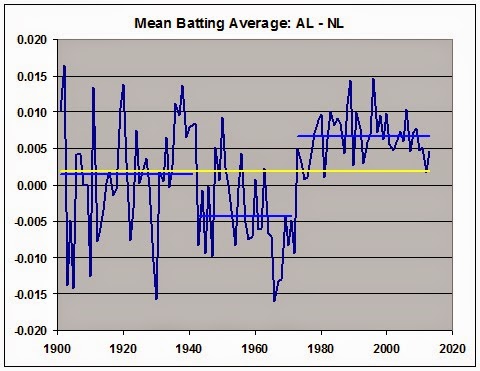 From 1943 to 1972 the NL batters did better, by an average of .004 per year.  The greatest difference was .016 in 1966.  Since 1973 the AL has done better, out hitting the NL by an average of .007 per year, with peaks of .014 in 1989 and .015 in 1996.  These average differences in the three eras are indicated with heavy blue horizontal lines. The yellow line is the average difference for the entire data set.  Since 2007, as batting averages in both leagues have dropped by large margins, the gap between the leagues has gotten smaller.

It occurred to me that a good batter should be above the mean by some margin, and standard deviation ought to be a useful number.  I got the data here for the 2013 season, and arbitrarily eliminated players with fewer than 200 at bats.  The mean batting average of the 170 qualifying players was 0.2568, as compared to 0.2558 for the every player, every at bat method cited above.  The standard deviation was .030.

Miguel Cabrera's league leading batting average of .348 for 2013 was a full 3 standard deviations above the mean.  Here is a list of all the qualifying AL players with batting averages over .300 in 2013.


Five full season Tigers were on that list of 15 names.  They picked up Iglesias at the End of June, 2013 then lost Peralta and Infante over the winter.  Iglesias is now out with stress fractures in both legs, and will miss the entire 2014 season.  He is expected to make a full recovery.

Afterthought: 2007 was the year MLB got serious about enforcing bans on PEDs.  Since then mean batting averages have dropped by about 20 points.  Coincidence?  I don't think so.

This is for Mike Shupp

I'm not any kind of Red Sox fan, but I think Dustin Pedroia is pretty cool.

He hit his 100th HR tonight, a grand slam that bounced off the top of the monster.

Because of several travel days and 3 games postponed due the weather, they have played from 1 to 6 (!)  fewer games than their division mates.  Chicago, with the most games completed, also has 14 wins, but 6 more losses than the Tigers.  The second place Royals also have 14 wins, against 12 losses.  These games in hand give the Tigers a chance to build some separation, if they can take advantage.  After the 3-game Royals series, they have 4 at home against the hapless Astros, so the near future looks pretty bright.

An average run differential of 0.39 is not a robust recipe for success.  Both offense and defense need to improve.