Because of several travel days and 3 games postponed due the weather, they have played from 1 to 6 (!)  fewer games than their division mates.  Chicago, with the most games completed, also has 14 wins, but 6 more losses than the Tigers.  The second place Royals also have 14 wins, against 12 losses.  These games in hand give the Tigers a chance to build some separation, if they can take advantage.  After the 3-game Royals series, they have 4 at home against the hapless Astros, so the near future looks pretty bright.

An average run differential of 0.39 is not a robust recipe for success.  Both offense and defense need to improve.

Here's a look at scoring by inning, averaged over the 23 games. 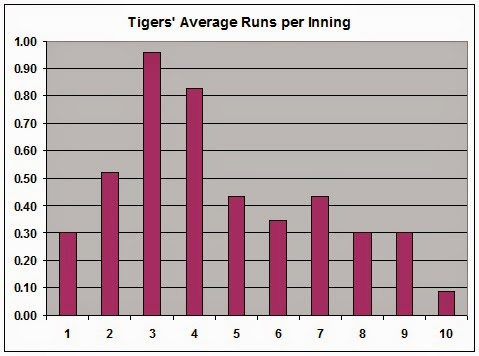 This isn't too different from the chart I posted after game 12.  Scoring in inning 3 has gone up a lot. Inning 7 is up a bit.  The rest hasn't changed much.  The second and third times through the order are when the fire power kicks in.

The opponents' results look quite different from the Tigers'. 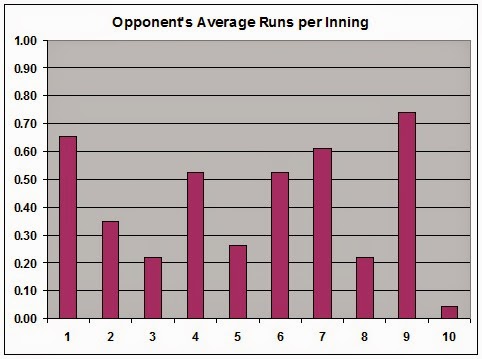 Tigers starters in the first inning have given up 1 run 7 times and 2 runs 4 times.  After that, they settle in better than the opposing pitchers do, and don't have a sharp fall off 2nd and 3rd time through the order.  The really bad result has been in inning 9.  Much of this is due to a 5 run melt down against the Orioles on April 5th, though the Tigers hung on for a 7-6 win that day.  Other 9th inning gifts include 2 at 3 runs, 1 at 2 runs, and 3 more at 1 run.  Most of this damage was done in the first 7 games, and things have settled down considerably since.  I expect this to improve dramatically as the season moves on.

Here are some hitting stats.


Since Miggy got such a slow start after his big contract extension, I thought I'd take a close look at his performance this year.  Last year, after missing the entire 2012 season due to injury, Victor Martinez started slow and steadily improved all season, finishing at .301 with 83 RBI's.  I wish I would have followed his progress.  Pulling your average up as the season goes on is very difficult, since the dead weight of previous plate appearances gets larger.  Anyway, back to Cabrera.  I have the impression that his performance falls off in the late innings, especially with men on base.  Let's give that a reality check.

Here is his batting average, including a split after the 6th inning.  Naturally, the post 6 set has many fewer plate appearances, 26 vs. 69 from 1 through 6. 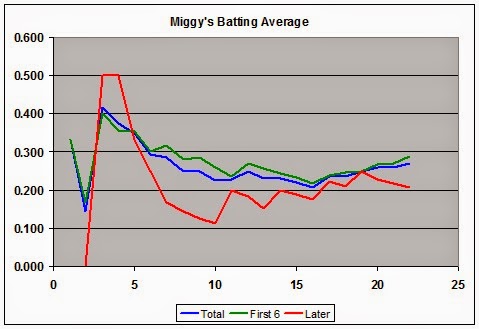 I heard on the radio that after game 16 one of the local sports writers tweeted Miggy's stats, with the claim that it was by a huge margin the worst 16 game stretch in his time as a Tiger.

But see here for some perspective, and possible refutation. Since game 16, he's batted .419.

His game by game stats can be found here.

Game 16 was when his batting average [blue line] bottomed out at .206.  Things are looking up since then. Late game performance does lag that of the first 6 innings, by a variable margin.  But there are surprises.  Late hits have been more productive.

An RBI for each hit, as has happened after inning 6, is rather amazing clutch hitting.  For now, this is a small data set.  It will be interesting to see how it develops.

For now, several team mates are close in RBI's: Kinsler and Costellanos with 14; V. Martinez and Hunter with 13, and Jackson with 10.  The team is on a pace to score 732 runs this year, a 64 run decline.  That needs to be corrected.

Pleasant to watch, and if the Sox don't go all the way, best of luck to your Tigers!

Or anyone other than the Yankees.