Encounter with a Bernie Bro

On 3/19, I posted on FaceBook an excerpt from Adam Parkemenko's daily BIG STUFF.  This led to an encounter with a Bernie Bro.


Adam Parkhomenko --
Remember when House Republicans were the worst people in Washington? Well, they’re still pretty awful, the title for worst has been claimed by Mitch and his cronies. Where to begin. Let’s start with Sen. Richard Burr, chairman of the Senate Intel Committee and someone who was busted in a recording obtained by NPR telling rich donors how bad the coronavirus would get even as Trump was telling Americans it was no big deal and it would just go away. Then we have Sen. John Cornyn, who used a racist diatribe to explain why calling it the Chinese Virus isn’t racist. Sen. Ron Johnson, one of the biggest scumbags of the Biden stuff, told his local paper that you just gotta keep it in perspective that a few million Americans might die. And then there’s Rand Paul. And really, ‘nuff said. Under Mitch’s leadership, or lack thereof, the U.S. Senate dragged its feet for days on the action the House took and now Mitch wants to cut Pelosi out of the negotiations. And for reasons we will never understand, there are many Democrats who want to take politics out of this current environment. These people must be new here and have never met a Republican. Like David Axelrod complaining because Democrats are running ads against Trump’s response? Seriously, Axe? Some of those first term capitulations are suddenly making a lot more sense. Trump fucked this up, and he and his party are going to be responsible for the deaths of many Americans. We sure as shit should be talking about that.

Just more bipartisan fuckfoolery. I'm immured to it, now. What will fall will fall.

Both sides are not the same. 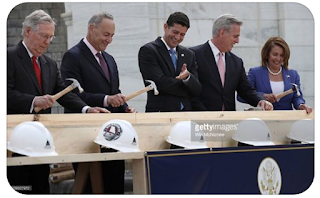 Seriously, there are differences in any economic or social metric you can think of between when Rs and Ds are in control. And with the Ds it's always better.

Yes it's true that both parties have too much corporate interest. But that does not mean that they are equal. Frex: BHO had the backing of Wall St in '08, but they largely abandoned him in'12, because they didn't like what he was doing.

Sorry [JzB}...I no longer believe this. I see them as two rival gangs in a kind of "Three families" criminal setup. The third family is the nonpartisan/bipartisan Deep State, which is actually more powerful than either gang. It allies itself with whichever gang seems most likely to continue to succeed in doing its bidding.

We've recently had a little shakeup of that system, because Trump surprised all THREE gangs and essentially took over the Ratpublicans. He is a rogue gang leader, and so far the other two gangs (and whatever parts of his own gang secretly wish him gone as well) have not been very successful in unseating him.

They DO keep trying, though.

We'll see in November...if of course there even IS an election in November. But never fear...we'll someday see who wins and who loses.

It's just the way things work.

Been that way since history began...

BEFORE it began, I'm sure.

It just didn't get written down.

Well, you're entitled to your opinion. I've studied these things. Policies have consequences for people's lives, and R vs D policies are drastically different.

My dad told me something ca. 1962, and I never forgot it. Every once in a while, if a crumb falls off the plate, the Democrats might let you keep it. The Republicans won't even do that.

Also, ponder these things -- Would President Gore have ignored the screaming warnings from the intelligence communities like Shrub did - that allowed 9/11 to happen?

Would he have launched an illegal and pointless war against an uninvolved third-party country based on invalid, cooked intelligence?

Would he have cut taxes on the rich while launching this war - something no ruler in the history of the world has ever done?

Would President HRC have ignored the impending Covid-19 situation for months, while denying the reality of it to the American people in the hopes of personal gain?

Would she have signed into law yet another tax cut that benefited only the super rich and did squat for anyone else? And that, by the way, was completely unjustifiable on any economic terms and needlessly blew up the national debt?

Look at the history of criminal indictments in R vs D administration - dozens, maybe hundreds of Rs and a small hand full of Dems.

Look at the Rethug Senators who dumped millions in stocks just before the crash, while publicly saying Covid-19 was no big deal and we'd all be fine. The one from GA even made a huge investment in a tech company that might profit from people working from home. And her husband is Chairman of he New York Stock Exchange.

These are off the top of my head. Policies matter - to you and to me and to the rest of the world.

Many of the things I listed were earth shaking.

Imagine how different it all would be without 9/11, ISIS, the disaster in Syria . . . Needless wars and ghastly foreign policy blunders have drained us of blood and treasure, and thoroughly destabilized an already fragile middle east.

And Trump and his cronies have gotten richer by many, many millions. To our detriment.
Ignoring these things for the sake of believing in a fictional both-sides-do-it duality might be satisfying in some way that I can't wrap my head around, but it is not an accurate depiction of the world we live in.

You write: "Every once in a while, if a crumb falls off the plate, the Democrats might let you keep it. The Republicans won't even do that."

This in the biggest bakery of all time!!!

And you claim that they are "different?"

Not much more to say. I think that your father's statement pretty well sums up the difference between the two parties.

I could argue against every point that you make here.

You are as convinced as are the Trumpsters.

I will say this, though.

Don't worry. You have a lot of company.

It's pretty damned lame to dismissively hand wave away a long list of actual facts. In case you didn't notice, I put a lot of thought and careful planning into my response. Did you even read past the anecdote? I do commentary like this all the time, because I value the truth. You're welcome.

You could argue - but you don't. That says a lot, right there.

And, btw, comparing me to Trumpers is a blatant insult, because I actually fucking think things through; and I deeply resent it. You haven't done anything to earn the right to an attitude quite that superior.

If I'm convinced of something, it's because I've done the leg work to uncover actual facts and data. Years of technical training, along with my natural inclinations, lead me to make data-driven decisions. I have 463 posts on my blog with the tag "economics" and have actually put a bit of serious thought into some of them, with real graphs and detailed analysis.

What IS similar to Trumpers - and right wingers more generally - is a casual disregard for facts and data, with no attempt at rational discourse. I've experienced this hundreds of times. It's depressing as hell.

My posts are public on purpose. I welcome disagreement.

Note that it moves the discussion along in a more constructive way when the disagreement actually makes some sort of sense.

Prove to me that I'm wrong, and you will have done me a favor. The operative word here is PROVE.

But do it tomorrow. You've kept me up unit midnight, and I'm gong to bed

Think it over. Seriously.

I am not going to even TRY to "prove" what I am saying to you.
The proof will be in the pudding.

We'll see what happens if Biden is elected with a majority in both houses. Or without.

Or if Trump remains.

Or...if some other outcome happens.

ALL willing supporters of the Permanent War state that has decimated this country on all levels and has simultaneously been the single most polluting environmental set of events of the last 30+ years. And all complicit in the selling of the country's industrial strength to the highest bidders, a sale that has totally wrecked the economies of the working class/middle class.

Just another tool of the globalist corporate system for his entire career.

And yes, I did read your posts.

I will read them no more.

And at that point, he blocked me.  There was no attempt to engage any of my points, just spouting an extended sequence of naked assertions.

I'll concede that the Dems are far too close to big business and especially big finance.  And, to be sure, the history of humanity in a nutshell - always and everywhere - is the exploitation of the many by a small wealthy, privileged elite. But the mere fact that there are disturbing similarities between the two parties does not mean that there aren't also deeply significant differences. Our own history over that last hundred years, and especially the most recent decades, demonstrates that dramatically.