Here is a graph of the activity in the Dow Jones Industrial Index since the beginning of the month. 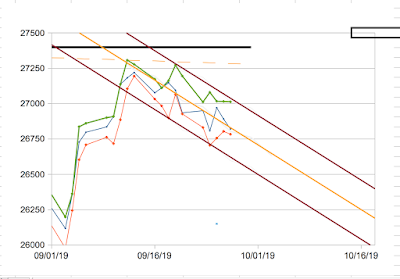 The black line at the top of the graph is a projection of the all time high of 27398.68, reached on July 16 of this year. The local high on 9/12 of 27306.73 didn't quite get there.
A couple weeks ago I drew a trend channel around the August decline, but that fell apart pretty quickly. Stock market analysis in real time is always dicey, and you can't fall in love with what you thought you saw.
Back at it, I've drawn a new declining trend channel, outlined in purple that looks like it began around 9/12. instead of just going by daily closings, this is now based on the intraday highs and lows. That's better and more complete information. Daily highs are in green, lows in red, and closings in blue. The midline of the channel is in yellow.


Note a couple of things. First, all the action this week is contained by the Tuesday high and low, 27079.68 and 26704.96, respectively. In Eliot wave terms, this suggests counter current action, and it's pretty week. I'm not very good at this, but I'm reading it as wave 4 of a five wave impulse decline that should play out in the next week or two. Wave 4 is unfolding and might take a few more days.
Wave 5 follows. Suppose wave 4 ends at 26900. Then a target range for the wave 5 bottom would be between 26330 and 26490.
Second, the center line of the trend channel has been a magnet for daily high, low and closing values. Since 9/12, several of these have wound up at or near that line.
This might seem like a cross between mumbo-jumpbo and science fiction. But I've been amazed by how many real world phenomena, and stock market action in particular, moves within channels.
I'll be very interested in seeing how this develops, and if my pessimism is validated.
For a big-picture view, see this post.

My recent bold prediction did not come to pass.  The recent channel I thought looked pretty good got blown away rather quickly.  So, it's time to step back and have another look.  Here in Graph 1 is a view of the Dow industrials index over this century. 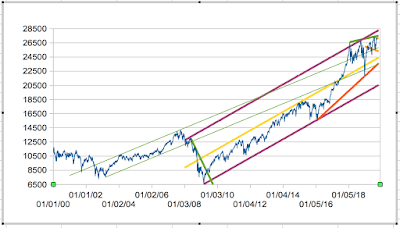 I have highlighted some trend channels.  The light green lines contain the first big rise of the century.  They are projected into the present, which might or might not mean anything.  The heavy purple lines indicate the present trend channel from the recovery after the 2008 recession.  The yellow line was the top channel border until the index burst through in 2017.  This effectively doubled the width of the channel - this happens sometimes - and it is now the center line of the channel.

The red line connects two major bottoms.  Whether that has any significance is yet to be demonstrated.  This is the big picture, covering close to two decades of index movement.

This recovery is now over a decade old, which is quite rare. Further, I find it hard to believe that American industry is worth about 1.75x as much as it did 3 1/2 years ago. The bold move that occurred through 2017 looks a lot like irrational exuberance.  What reasonable explanation is there for most of that 75% rise happening in the first year of the Trump administration?  Since then, with a lot of gyrations, the index has gone essentially nowhere.

Graph 2 is a closer focus on the index during the recovery since 2008. This is just for perspective.  Can it make any kind of sense that the nominal value of the Dow 30 industrials has increased by more than a factor of 4 in the last decade? 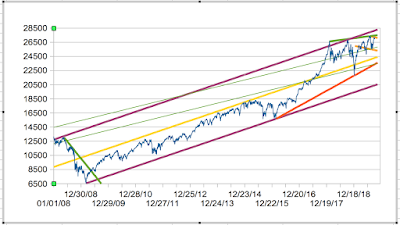 Graph 3 is a look at the Dow Industrial Index during this calendar year.  The heavy green line connects the 3 tops since early 2018. The light green lines are the extended trend borders from the pre-2008 upward trend.  The yellow and red lines are as described above.  The orange lines might be the current short term decline trend channel- but it's not pretty, and I've been fooled before. 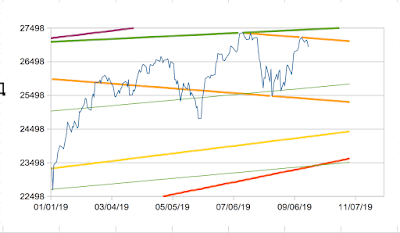 My current sense is that we are now post peak.  If the index were to rise above the heavy green line, then this idea would be refuted.  The next resistance would then be at the top purple line that you can see going off the top at the left side of Graph 3.  But I think we're going down from here.  Each of the light green lines might offer some resistance.  You can see this has already been happening at several points during the year.

Should the index continue down, the next major resistance level would be yellow line - the channel center line, since I have no faith in the potential orange channel. If that is breached, the red line might come into play.  After that, it's the bottom purple line shown in Graphs 1 and 2.  This could happen somewhere between 20000 and 22000, depending on the timing and fall rate of the decline.

This gives a broad range of potential resistance targets that land in the range of index values from CYs 2014 through 2016. For reference, that time period is shown in Graph 4.  Back then, the yellow line was a hard upper barrier, and the purple line was robust support.  When situations reverse, support and resistance lines can exchange their functions. If all of these potential support levels are breached, the entire gain from 2009 could be given back. 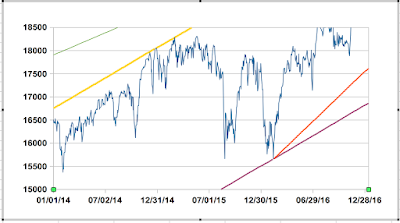 Of course, that is [I hope] worst case, and every bit of this is speculative. September is historically a weak months for stocks, but this year it has gained back most of the 2000 or so points lost in August.  On average, Octobers have been net positive, but the most dramatic historical declines [1929, 1988] have been in October, which is right around the corner.

Things don't happen to satisfy my expectations.  But I am quite pessimistic.  This recovery has been over-long for quite a while already, so we're way over-due for a major correction.  Trump's economic and trade policies are based on abysmal ignorance, have already done significant harm, and those buzzards will be coming home to roost some time soon. If you think the national debt level is important, it has ballooned under Trump - contrary to his campaign lies. Unsecured consumer debt is at a historically high level.  Our economy is about 70% dependent on consumer spending.  How can that continue when wages have been static for 40+ years, even when inflation is low?  This is why personal debt is high.  People have leveraged their livelihood, and are badly over-extended.  Where are future profits going to come from?  If things get tough and lay-offs occur, spending and profits will take bigger hits. This is how things spiral out of control.

Maybe there is some reason for optimism that I'm overlooking.  If so, point it out in comments.

My bold prediction on FaceBook a week ago today was that within 2 to 3 weeks we'll see the DJI below 23,500, and under 22,000 in a few weeks after that. Yes, I am anticipating the worst.

As of today's closing, the DJI is down 285.16 points, ending at 26,118.09. The attached chart is the DJI daily closing values over the last few months. It includes a mid-day value, when the DJI was down about 360, instead of today's closing.  But that changes nothing. 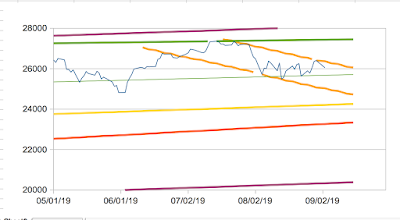 DJI closings since May 1.  Data from Yahoo finance.

The purple lines near the top and bottom of the chart are the borders of the long-term trading channel, since the 2009 recovery.

The current short-term trend channel is indicated in orange. [Yes, there are channels within channels.] It takes a while to determine that a new channel has been established. This one began no later than the first week of July, and looks pretty sound. Of course, a trend only lasts until it doesn't.

The thin green line was the top of an old trading channel from 2002 to the crash in 2008, projected across time to the present. It converges with the top of the current orange channel on Sept. 27.  Resistance and support lines can switch identities over time, so what happens between now and then will be interesting. You can see it's already acted as a support line within the orange channel. Interestingly, the bottom of the 2002-2008 channel [not shown] converges with the red line [see below], right about now. So there could be a cluster of support lines near 2400 - 2500.

One of these is the yellow line, the midline of the very broad trading channel continuing from the 2009-on recovery. A meaningful break of that line will probably indicate that we are in serious bear market territory.

The red line is projected from the Feb 2016 and Dec 2018 bottoms. It is also a possible support line.

The bottom purple line is the lower border of a decade-long trend channel, and the most important support level. It that is breached, there will be a panic, and all hell will break loose.
Posted by Jazzbumpa at 5:13 PM 1 comment: