I've updated the graph, and maybe made it a little easier to read. 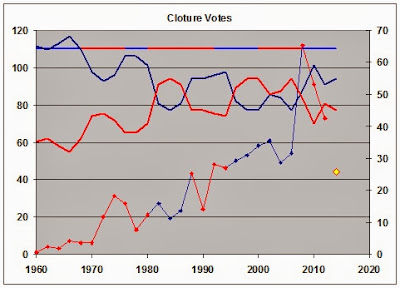 From Congresses 65 [1917-18] through 91 [1969-70] there were never more than 7 cloture votes in any two-year session.  The line rising up from the bottom left of the graph shows what has happened to votes per session since.  It's color coded by the party with the minority in the senate, Red for Rep, Blue for Dem.  The yellow dot shows the 44 cloture votes to date for the current 113th congress.

Filibusters use is down from the 112 cloture votes of the 110th congress.  But the 73 votes of the 112th congress is still above the pre-Obama high of 61 in the 107th congress.  With more than a year left in the current 113th session, it was on a pace to exceed the total of the 112th.  However, that will probably now not come to fruition.

Dems have used the filibuster, but typically about as often as the current norm.  Reps have been responsible for the vast majority of the increased filibuster use over time.  The squiggly red and blue lines [same color code, right scale] indicate the number of senators per party at a given time, counting independents who caucused with the party as being of that party.

It's pretty clear that abusing the filibuster has not been a problem over the entire span of the last century.  It clearly has become one now.  Filibuster use more than doubled as soon as BHO became president.  Using it to block appointments has been particularly egregious, prompting the current change in senate rules.

For additional context, he alternating blue-red line at the top of the graph shows the sitting president's party affiliation.

I see Kevin Drum at Mother Jones has covered this subject as well.


The last straw came when Republicans announced their intention to filibuster all of Obama's nominees to the DC circuit court simply because they didn't want a Democratic president to be able to fill any more vacancies.


Cloture vote counts and make up of the Senate from Senate.gov.

Posted by Jazzbumpa at 4:27 PM No comments:

Once again, Krugman takes on the inflationistas, aka your typical derpy Republicans.  Their tired story goes this way:

Vice Chair Yellen will continue the destructive and inflationary policy of pouring billions of newly printed money every month into our economy, and artificially holding interest rates to near zero. This policy has been in place far too long.


Of course, it's nonsense.

PK shows this from FRED, here as graph 1.

Graph 1 - Monetary Base and Inflation since 2009

Sure, enough, a big, big change in Money and a pretty flat non-response in Inflation.

But this is only short term, since the Great Recession [GR].  Lets take a longer view in Graph 2, using the same FRED database.  Here the two data sets are on opposite axes, to let Inflation more visibly inflate.

Graph 2 - Monetary Base and Inflation since 1970

Aside from the Great Inflation Dragon, ca.1980, it's been a rather steady and featureless climb for Inflation up until the GR wiggle.  The Monetary Base had a slightly faster than linear rise, until the three recent big steps up.

PK's point, then, is well taken.  Let's look at it a different way.  Here in Graph 3 is Inflation as a function of the Monetary Base.

Pretty dramatic.  In the past, it would have seemed that increasing the Monetary Base correlated with rising Inflation. Suddenly, though, when the GR arrived, that stopped and stayed stopped.   More likely, though, both variables just trended up over time, each for its own reasons.

Here is the same graph, with the GR truncated.

But if you look at annual changes, a somewhat different picture emerges, as seen in Graph 5.

Graph 5 - Inflation vs the Monetary Base, Annual % Change

It's hard to see an overarching pattern here, but at a detail level, it seems that the movements are contrary.

That appears to be an illusion, though.  The scattergram in Graph 6 below, with Inflation on the vertical axis, suggests that there is no relationship at all.  Note that this data set is truncated at 2007, so there is no effect from the GR.

Including 2008-13 in Graph 7 emphasizes just how different those years really are.


Just to demonstrate that the money measure doesn't matter much, Graph 7 shows the annual Inflation rate vs the change in MZM.

Now the Christmas tree shape is leaning hard to the left, suggesting, if anything, that the relationship between Money supply growth and Inflation might be negative.

What this leaves us with is very few things inflating these days, other than the money supply and Republican derp.