The History of Federal Deficits

Here is how the Federal Budget has looked since 1901.  Receipts indicated in green, outlays in red, and the net in yellow.   Data tables from GPO Access. 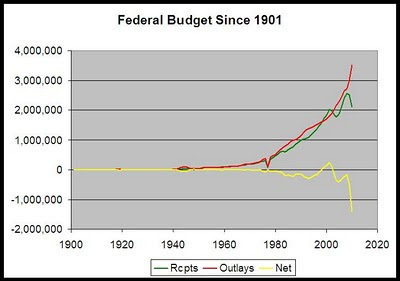 Before you conclude that the sky is falling because those lines are exponential, lets recall that anything growing at a constant rate (or close to it) will arc upward that way.  To put it in context, here is the same data, but as a function of GDP. 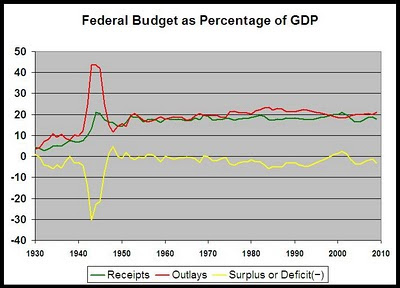 Since about the mid 50's, receipts have hovered a little below 20% of GDP.  Outlays have generally been in the same range, except for the pig in the python during the Reagan admin.  If this doesn't prove Hauser's Law, I don't know what does.*

Since the receipt and outlay lines tended to twist around each other most of the time, there were oscillations between annual deficits and surpluses.  Other times there were big deficits.  Let's have a closer look.

I've separated the top graph into a series of chunks so that the budget picture can be presented in a context that doesn't get subsumed by the exponential rise in GDP and budget.  The first chunk covers the beginning of the 20th century. 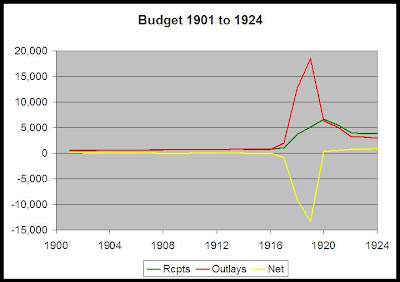 The only thing of interest here is big blip in the late teens caused by WW I.  Let's move on. 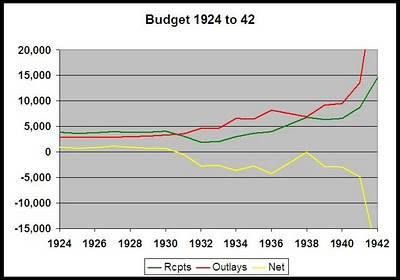 Now we have some things to talk about.   Look at those huge outlays during the great depression.  (Well, except for 1937-8.)  Hmmm - not so much, compared to WW I expenses, come to think of it.  An interesting feature of the outlays is the step-and-riser-staircase shape of the line, as FDR and his team improvised their way through the New Deal.  Note also how revenues started to increase in 1934, as business activity slowly picked up.  Then WW II happened, and everything went off the chart.  Let's rescale and continue. 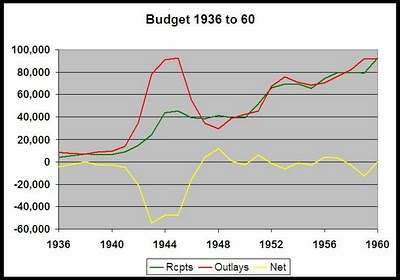 The deficits due to New Deal social programs are dwarfed by those caused by war expenses.  Expenses dropped dramatically when the war ended, but the corner was turned on the growth line, and there was no turning back.  (I hope.)  Note the tight fit of receipts and outlays during the Eisenhower years.  Except for some rather serious foreign policy screw ups, like Iran and Viet Nam, I like Ike pretty well.  Here come the tumultuous 60's 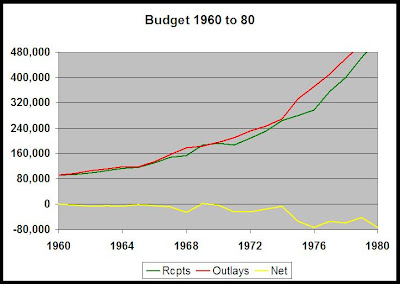 Hmmm - not much to see there.  Where's my Great Society, Dude?  Wasn't that supposed to be a series of budget busting social programs?   By 1968 the Viet Nam War was pretty thoroughly escalated.  (Hence the term "escalatio.") Despite this war costing about as much in constant 2005 dollars as WW II ($620 Billion, plus or minus some pocket change), deficits didn't grow much until it was over.  This is worth emphasizing - The Viet Nam war, though terribly expensive, did not lead to huge deficits, because revenues were able to stay close to expenses.  The key to revenues is taxation.  Contrast the Reagan years (below.)

Then there was the Arab oil embargo, stagflation, "Whip Inflation Now" buttons, the misery index, and the beginning of (almost) perpetual deficits.  A close look at the chart shows that, except for '70 to '72 stagnation and some anemia in '74 to '76, revenues were keeping pace with outlays.    That brings us to the real turning point. 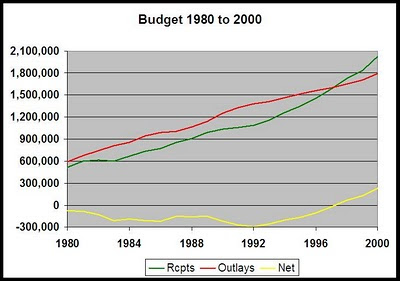 St Ronnie quickly ballooned the deficit to levels never before imagined.  How did he accomplish this impressive feat? There are two main keys to the answer:

1) tax cuts - see how revenues were flat from '81 to '83, and rather sluggish in '86? Interestingly, in late '82 we saw the first of Reagan's tax increases - nobody remembers them - and by '84, revenues were again on the rise.  (as an aside, note in the link that unemployment shot up following the tax cut, and dropped after the tax increase - the exact opposite of what right wingers would have you believe.)  The net effect of Reagan's tax policy gyrations, BTW, was to shift the tax burden from the wealthy to the middle class.  The result has been 30 years of declining GDP growth.

2)  STAR WARS!  Lacking a real war (I mean - does Grenada even count?) to grease the palms of the industrial-military complex Ike had warned us about a quarter century earlier, Reagan invented the moral equivalent of war, the Strategic Defense Initiative - probably the biggest boondoggle in the history of the universe.   Then Bush the Elder inherited the ensuing recession, with almost flat revenue growth from '90 through '92, culminating in the biggest single year deficit ever. (So far, anyway)

Is Clinton even worth mentioning?  Probably not.

Well, as some wags put it, Clinton was lucky.  His successor, not so much. 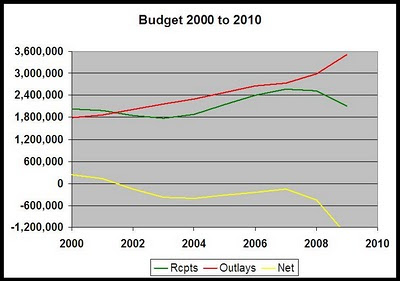 Poor Dubya.  He walked in the White House door and 5 minutes later the wheels fell off the economy.  Well - bubbles do burst.  But the measure of a decider is how he plays the hand he's dealt.  His big answer: TAX CUTS!  Not one, but two!  These were so ill-considered and irresponsible, even Reaganite supply-sider Bruce Bartlett didn't like them.  Even worse, Bush the Lesser perpetrated this foolishness as he was taking the country to not 1 but 2 wars.  This is stunning.  Has any ruler in the history of the world simultaneously gone to war and reduced taxes?  Is there a surer recipe for economic disaster than this grotesque irresponsibility?  Well, Ben "MEH!" Bernanke came to his rescue with the big reflation and the continuation of the rolling bubbles - tech stocks to real estate to obscure financial instruments that nobody understands or can properly evaluate, to commodities.   Well, that ended with a crash, and now we're hovering at the edge of deflation.

Dubya's buzzards came home to roost in 2008.  Then Obama inherited the worst economic situation in 80 years.  Well, the measure of a decider is still how he plays the hand he's dealt.  Neither B. Hoover Obama, nor any of his advisers, nor the disloyal Repugnicant opposition are up to the task.  Obama lacks vision and the understanding of what must be done.  The Rethugs are simply against anything that might make the usurper look good, and will gladly destroy the country to regain power over it.

To recap, here is my narrative:  Throughout the 20th century and up to now in American History, there have been two main causes of large federal budget deficits

1) Wars, and war-equivalent (frex: Star Wars) spending on the military.   Military expenses in a single year are now in the range of  the total cost of WW II, in constant 2005 dollars.   And we are not fighting the Wehrmacht!

Update (12/13):  I take great comfort in discovering that no less a figure than Reagan Treasury Economist Bruce Bartlett explicitly cites low tax rates - the "Starve the Beast" policy of Repugnicant thugs from David Stockman Grover Norquist to George W. Bush - as the cause of large, and now intractable federal deficits.  H/T to Niklas Blanchard.

Do you have a better narrative that fits the facts?  Can you prove me wrong?

And now, with wars continuing and tax rates lower than they've been since before the Great Depression, while facing deficits that make the earlier records look paltry, the only thing worth talking about are TAX CUTS!

Wow.  We are really screwed.

Of course Grenada counts, St. Ronnie had to restore his manhood after pulling out of Lebanon after the Marine barracks truck bomb.

For years I wondered why "Star Wars" wouldn't die even tho the sucker didn't work. Less than half the time even with homing devices in the target for the missiles to lock on to. Years ago I heard how Northrup didn't care if the guidance systems for the cruise missile worked or not because they thought the cruise missiles would never be used. I guess the "Star Wars" system got some parts from Northrup.
Then I found out who would build the system and who would build the bases to house the missiles. The two "B"s, Boeing and Bechtal.

While I agree with you on taxes and the economy, I don't think there is much anyone can do about it. The lies and bullshit have reached critical mass!!

Yup - we are well and truly screwed.