There seems to be broad-based confusion on the effects of QE II, as indicated by the movement in long bond rates.  David Beckworth takes a stab at explaining it, using a chart of this year's changes in 10-year Treasury yields.

I'm not convinced.  Markets move to their own rhythms, and attributing this rise or that drop to some exogenous event is often playing a game of post hoc.  I want QE II to work as much as anybody, but I don't expect it to do a lot, with the M1 multiplier below 1, and the money disappearing into bank vaults.

Look at a longer time frame on the yield chart for 10-yr treasuries.  Chart is from Yahoo finance.  I've added parallel trend lines to highlight the 30-year long trading channel. 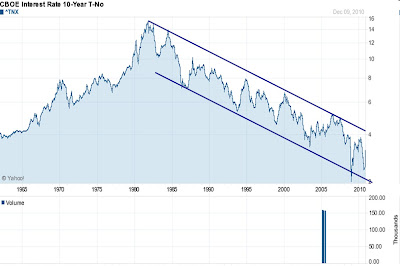 The recent activity looks like just another tooth in the saw blade.  In fact, current yield is about in the middle of the trend channel. It's hard for me to get excited until something dramatic happens, and this is a long way from it.
.
Posted by Jazzbumpa at 4:11 PM

Yep! It's the pesky M1 Multiplier that will be the demise of positive outcomes from QEII. I want to be remembered as the first one to coin the phrase, "the velocity of money trap."
And I still maintain that the Fed is trying to lower real long term rates by "pushing on a string." (Trying to create inflation.) It is deflation that seems to be the Feds larger concern.