Of Deficits and Inflation

It's part of common wisdom that Federal budget deficits are inflationary.

Update: Here is an example.  And a direct refutation.

Well, common wisdom is a lot more common than it is wise.  Let's see how this bit of it stacks up.


Here's  a look at deficits, as a percentage of GDP, along with inflation, as measured by year-over-year change in the Consumer Price Index, since 1951.  For the graphs in the post, deficits are positive numbers, and surpluses are negative.  This trick is to allow a possibility for deficits and inflation increases to be positively correlated.  I'm not thrilled with CPI as an inflation measure, but I have the data at hand, so we'll just go with it. 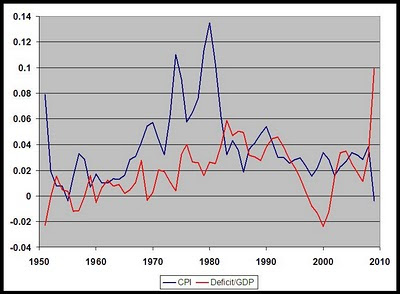 It looks as if there might be two realms, from 1950 through 1980, with generally increasing deficits and inflation, and since 1980 with small or non-existent deficits and low to moderate inflation.  In 2009, we may have entered a totally different economic realm, but that remains to be demonstrated, at least with regard to these variables.

From 1950 to 1980, peaks in deficits and valleys in CPI line up almost perfectly.  Though in the big picture they are rising together, at the detail level the year to year correlation is actually inverse. Change your perspective a little, and deficit peaks seem to lead inflation peaks pretty consistently.  Since 1980, I can't see any relationship, no matter how hard I squint.

Here are some scatter plots of YoY CPI percentage change against deficit as a percentage of GDP.   First, both variables are measured for the same year. 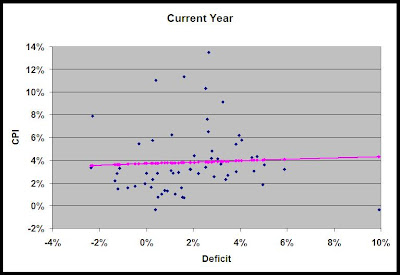 Lots of scatter, a trend line that basically traces the 4% CPI line with a very slight positive slope, and a correlation coefficient of 0.0476 - essentially nothing.  But we are expecting the deficit increase to lead the CPI increase, so here's a look at a 1 year delay: Deficit vs CPI increase a year later. 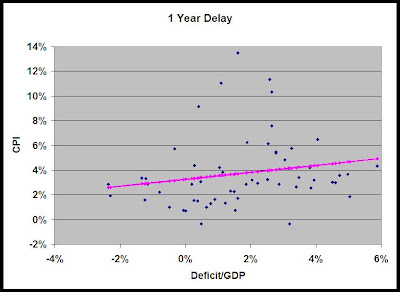 The scatter doesn't go away, of course, but now we can see a bit of a trend; about 0.28% inflation for each percent of deficit/GDP in the previous year.  But, with all the scatter, the correlation coefficient is only .19 - very weak correlation, indeed.  So far we have a small slope, weakly correlated.  Let's look at longer lags.  Because of the lags, deficit values for recent years will fall out of the data set.  As can be see in the graph immediately above, 2009's 9.91% deficit was the first to go. 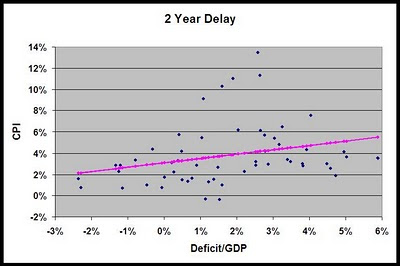 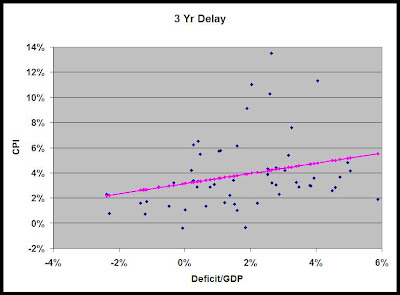 Though the scatter drifts a bit, the two and three year delays give pictures that are otherwise very similar. Here  we have a somewhat greater slope, about .4% inflation for each percent of deficit three years earlier.  The correlation, at .27, is a bit less weak, as well - but still pretty anemic. 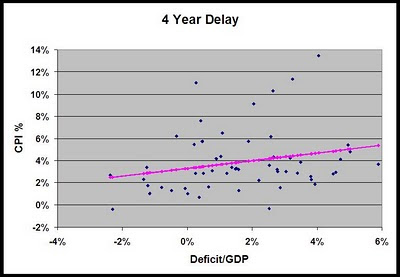 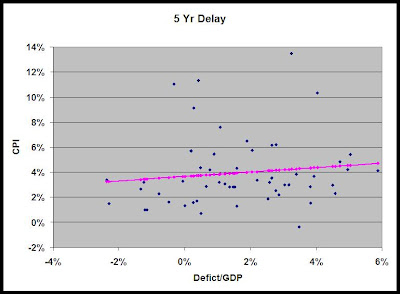 Farther out, the trend line flattens back down, again close to a constant 4% at 5 years, and the correlation collapses to a measly .12.

What are we to make of all this?  My first thought is, with such low correlations - not too much.  But to see both the slope and the correlation rise and then fall again over a 5 year period does suggest that there might be a real cause and effect, operating with a lag of 2 to 4 years.  Here is a graph of the slopes and correlation coefficients from 0 to 5 years out. 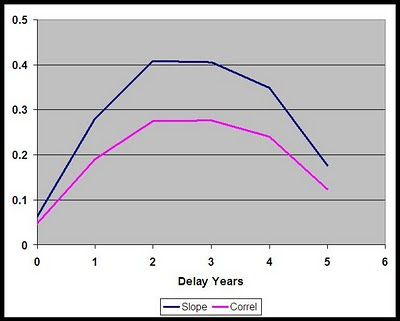 I can think of two reason why correlations might be weak, even if the cause and effect is real:
-  Inflation is a function of more than one factor, so other things, possibly operating independently, can be equally or more important.
-  If the time lags are meaningful, the lags from up to 5 years in the past are all operating together.  None of that is sorted out here.

Questions in my mind now are -

1) Is this correlation meaningful, or just a data artifact?

2) What does the very different look of the first chart before and after 1980 mean?

3) Do the current large deficits suggest that there may be some inflation around 2012 to 2013?

4) Or are we now in a different realm where deficits either don't correlate with inflation, or perhaps correlate in a dramatically different way?

What are your thoughts?

Jazzbumba said: Since 1980, I can't see any relationship, no matter how hard I squint.

Expect the incoming crop of "dumb as a stump" deficit alarmists to compound the problem.

I think that since 1980 we have been in a different realm than what classical economics is equipped to handle.

Policies ought to be determined by what works in an environment, not by what some austerian ideologue preaches. Deficit hawks will be the ruin of us.