With all the brouhaha over the expiration - or not - of the Bush tax cuts, it will be helpful to look at the actual effects of tax policy changes.  Tables of effective tax rates from the Tax Policy Center only go back to 1979, so this view is from the Reagan administration forward.   The TPC breaks it out a number of ways including income tax and FICA (which they call social insurance tax) by quintile, and with finer cuts for the top 10, 5, and 1 percent.    The also have a table for Total Federal Effective Tax Rate, which includes attributions of corporate taxes and federal excise tax, as follows.

To my way of thinking, this gyration makes no sense.  In my estimation, they are attempting to make the tax code look more progressive than it actually is.  Total federal taxation actually paid by PEOPLE is the sum of federal income tax and FICA (Social Security + Medicare.)

Here is a look at the reality of tax policy changes.  The first graph shows the effective average rate by income quintile.  The blue box highlights the Clinton administration.  Clinton effectively adjusted the tax burden upward by relieving the lowest two quintiles at the expense of the top quintile.  This is the essence of progressive taxation.  Note also, the negative taxation on the lower two quintiles - the net effect of transfer programs. 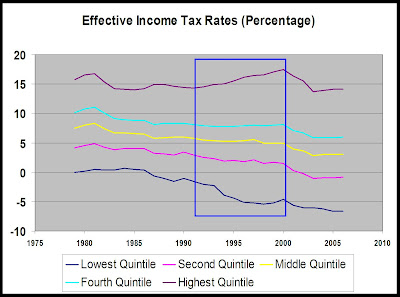 Here is a finer break down of the top quintile. 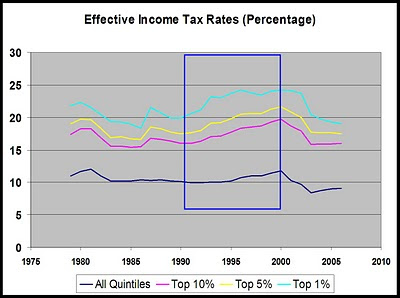 Though the effective rates for lower quintiles were flat or down during the Clinton administration, the average for all quintiles crept up, because the top quintile - in all of its divisions - paid more.  Here's my narrative:  Clinton changed the top marginal rate from 32 to 39%, and the threshold for the top bracket from under $100,000 to $250,000.  This pretty much eliminated bracket creep for the middle class, and put it at the top, where it belongs.  The net effect was a big tax reduction for the bottom two quintiles, little net change for quintiles 3 and 4, and a tax boost for the wealthiest.  The result was improved GDP growth - four straight years at over 4% - reduced poverty and a balanced budget - rather sweet, wouldn't you say?

In conversations about tax policy, the FICA portion - known as the payroll tax - is often overlooked.  Let's not do that. 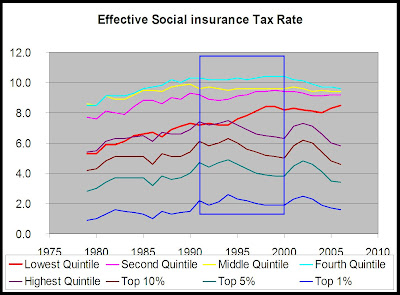 There are wheels within wheels here, so let's do some dissection.   From the beginning of the period, through 1990, there were annual increases in either the percentage paid in or the ceiling on which payments were based.  Frequently, they both went up.  You can see this effect most clearly in the bottom four quintiles, who always paid proportionally more, as a progressively larger chunk of their earnings was subject to withholding.  Also, the effect on the top tiers was minimal, as most of their earnings was above the ceiling.

During the Clinton years, the burden on quintiles 3 and 4 was close to level. Quintile 2 saw an increase as the rate was constant while the ceiling continued to creep up (ceiling eliminated for the medicare portion in 1993.)  For upper income earners the effective rate dropped, as greater portions of their income were above the ceiling.  Note that this was minimal for the upper 1%.  Such a huge proportion of their earnings is above the ceiling that rate and level changes are insignificant to them.

The odd looking line is the red one, for the effective rate of the lowest quintile.  That continues to increase until the millennium, before leveling off.  How can we explain this?  Here is my guess:  During the 90's, hundreds of thousands of jobs were added every month.  This allowed people in the lowest quintile to either find work, or find better work, so that they paid a constant rate on increasing wages.  This is also consistent with the slight dip and recovery that occurs in the early 2000's, with the recession of '01-'02 and jobless recovery, followed by the housing bubble.

Unfortunately, the data set ends with 2006.  I'm sure the story since then would be very interesting.

To wrap things up, let's have a look at total taxation - the sum of income and payroll (FICA) taxation, as it changed over time. 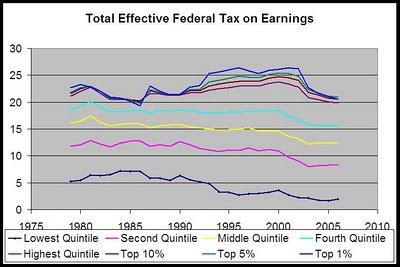 Only during the Clinton administration is there a spread in the top quintile, where the top 1% pays (a tiny bit) more than the 90th (or 80th) percentile.  To emphasize the political perspective, here it is by president. 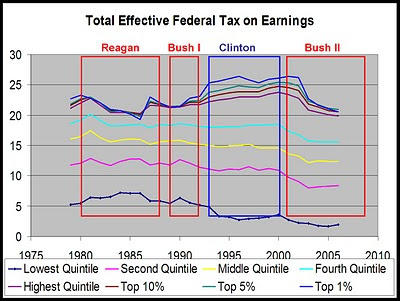 Reagan - higher taxes for the lowest quintile; some wiggle, but not much change for the 2nd quintile; a step down, then close to flat for quintiles 2 and 3, a drop for the top quintile, until a jump up in 87.

Bush I - Poppy Bush had the misfortune of governing during a recession.  Growing deficits forced him to accept a tax increase, in a compromise with the Democratically controlled Congress.   But, he did shift some of the tax burden from the bottom 40% to the top 1%.  Did you read his lips?

Clinton - Increased taxes at the top, and reduced at the bottom.  For the rest of us, not much change.

Bush II - Lowered taxes for everyone - but - the biggest benefits, on a percentage basis, and even more so on a dollar basis, went to the top.

Letting the Bush II tax cuts expire will cost everyone something.  But the cost to lower quintiles is not much.

The right solution is to keep tax cuts for the lower and middle classes, let them expire for the top two quintiles, and forget the horrible idea of a social security defunding payroll tax holiday.