More on the GOLDEN AGE

Similar to my graphs here, LK shows a break in median family income, as compared to GDP/family or, average family income.  Check it out. 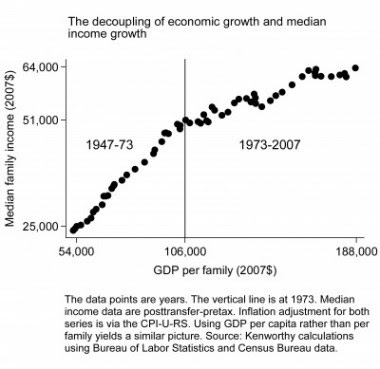 The vertical line on this graph indicates an inflection point of 1973.  You could perhaps move it out to the next bump, if you squint, but not much further.  Irrespective of that detail, what this means, simply, is that the already wealthy have captured more of the pie since the break point.  Notice also that 1) the most recent decade is almost flat and 2) The Clinton years were a lot better than anything else after the break.

Of course, we knew all this, no matter how much regressives are in denial.

Update (2/2 7:30 pm) :  Krugman references this same chart, but cuts across it differently.  His point (emphasis added):

The rise in prices implied by real GDP numbers is measured by the GDP deflator, while the rise in incomes as calculated by the Census involves dividing by the CPI. And while those two price measures matched very well pre-1973, since then, not so much  .  .  .


He shows it in a graph, and mentions 1973, since that is LK's chosen break point. (In both the graphs PK shows, the break is clearly much closer to 1980.) Whatever else this might mean, it illustrates yet another difference in the world before and after 1980-ish.

I've eyeballed trend lines in LK's graph breaking around 1980.   Pick whichever break point you prefer.  Either way the slope difference before and after is striking. 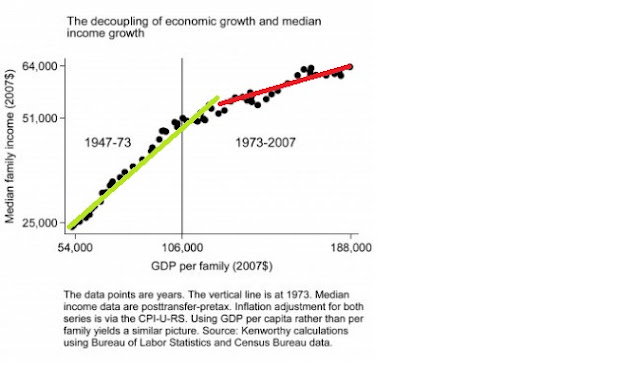 So let us summarize. The period of greatest economic growth in U.S. history was accompanied by high taxes, high regulatory burdens, and high union membership. And after those started going the other way, hmm. Well, correlation isn't causation, they say. But at least we know that lower taxes, lower regulation, and lower union membership don't cause higher growth, 'cause there ain't no correlation there to find, yo.

Exactly so - and exactly the point Mike Kimel has made many times at Angry Bear - most recently in this post.

As always, commentors rush immediately to denial when confronted with the facts.

The right-wing mindset probably should be summarized as, "don't confuse me with the facts, my mind is made up!".

This was followed by the development of Wanniski-nomics. With the election of Reagan in 1980 we have the full-force onset of policy designed to "fix" the problem.

In other words, we still need a solution.