I'll start off with the H/T's, to Jerry Critter who asked a probing question in comments,  to ifthethunderdontgetya, in Comments at SoBe, who linked to Thers at Whiskey Fire, who linked to an actual NEWS ITEM at the Guardian UK, because you can't get real news coverage from the corporate controlled (the importance of this will soon become clear!) U.S Media.

Now, back to regularly scheduled programming - focused on Federal Tax Receipts.  Where do you think they come from?  I'll just give it away:  Personal Income Taxes, Corporate Income Taxes and FICA (the payroll tax: you know that hyper-regressive flat tax - nominally for Social Security and Medicare - with a ceiling, and from which there are no exemptions nor deductions.)  Note: Other sources of income - excise taxes, and other miscellaneous revenues are not included in this analysis, and are excluded form the totals.

OK.  That was easy.  This one is not.  How much of Federal Taxes do you think comes from each source?

Oooh.  Toughie.  I suspect you will be surprised.  I sure was   The White House Office of Management and Budget is a Storehouse of useful information - including the answer to this vexing question.

Here is a graph showing the log of tax receipts from these sources, since 1934.  Individual Taxes in Blue, FICA in Yellow, and Corporate in Red.   This is on a log scale.  The upside: constant growth presents a straight line.  The downside: differences on that scale are really hard to assimilate. 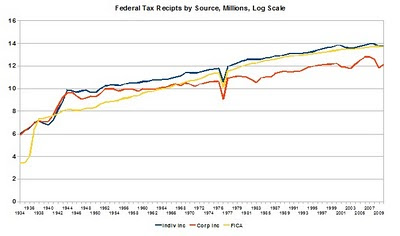 What we can see here is that there was a time in the late 30's when receipts from corporate taxes and personal taxes were about equal.  It was even a 3-way near-tie with FICA for a couple of years. After that, corporate taxes steadily declined for decades as a portion of the total.    (The spike down in the data between 1976 and 1977 is due to a separately tabulated calendar quarter in the tables.)

Here's  a close up of the last couple decades, on a linear scale. 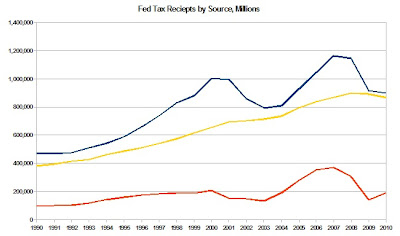 Now, lets look at the data in a totally different way, to put all this in perspective.  Here, each source is presented as a percentage of the total Federal Tax Receipts. 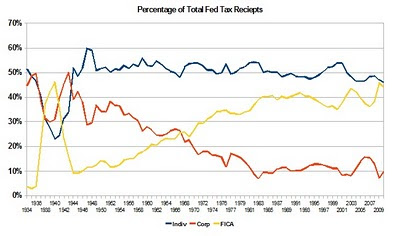 Can't tell you exactly what I might have expected, but it sure as hell wasn't this.   Pick your inflection point - either '77 or '84 will do.  Since 1977, the percentage of the total paid by corporations has wobbled around a bit, but averaged 11% of the total.   The percentage coming from personal income tax has been 50%.  Obviously, the amount contributed by FICA is 39%.  Let's have a look at trends since 1977. 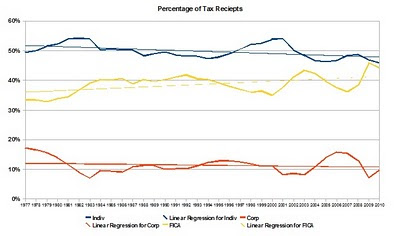 The corporate tax trend is basically flat at 11%. The contribution from individual taxes is actually at a slight decline.  Meanwhile the trend for contribution from FICA has steadily increased for well over 30 years!

Are you as shocked as I am?

Here, to put the perspective in perspective, is a look at total receipts, on a log scale. 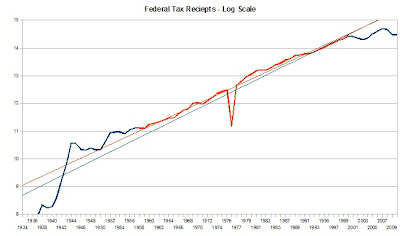 I've placed a couple of best fine lines, a blue one through the entire data set, and a red one through the period 1958 to 2000, which seems a little more regular than the entire set.  At the far end, we had the Great Depression and WW II.  At the near end we had Bush tax cuts, Bush wars, an the ensuing Great Recession. Surprisingly, the red line has a slightly lower slope than the blue line.  Not surprisingly, total receipts have been close to flat for the last decade, as the Bush tax policies have succeeded in starving the government.

1)  During the post WW II golden age, the corporate contribution to total tax receipts, though continually declining, was typically far greater than during The Great Stagnation - the period since roughly 1980.
2)  The FICA contribution to the total, despite a break point to a lower slope circa. 1980, has grown steadily since WWII.  It is now virtually tied with personal income tax for the biggest contribution chunk.
3) Since the turn of the century, tax cuts and a stagnating economy have caused a huge gap in tax receipts.  Grover Norquist's plan to destroy government by starvation is working like a charm - at the Federal, State, and local levels.
4) Not shown here, but obvious if you think about it or look for the data, is the decline the growth in government spending, at all levels - for everything except defense - since 1980.

If, like Norquist, you want life without government, take a look a Somalia.  Or dig out A Distant Mirror by Barbara Tuchman and see what life in Europe was like in the 14th Century - a time when society deteriorated, there was little or no effective government, and roving bands of thugs terrorized peasants, kings, and even the Pope.

Because the Rethug plan, in thrall to the Kochroaches, is to take us back to feudalism.

Here's some bonus pondering that I did back in 2007.

Jazzbumpa,
I stopped by earlier to read this post but held off leaving a comment until I could gather my thoughts. Without doubt, a daunting number crunching, tender tendon-numbing job. Off the top of my head, I thought corporate tax revenues were 40% of the total pie in the 1950s compared with 11% today, but I could be wrong on this. Two years ago, I compared income inequality ratios, 1929 – 2009. The smallest ratios occurred in the post war years through the early 1980s. The ratios peaked in 1929 and again in 2007. No surprise, it seems trickle down always accompanies aging.

BTW, this may interest you, The Book of Jobs, about our chronic unemployment problem.

I second your promotion of A Distant Mirror. I've been reading it and marking many pages of interest. I'm taken by the explicit regressiveness of taxes imposed. Imposed by the King (of France, but Edward isn't far behind) to finance wars, to bribe nobility, to purchase the footwear of Satan - pointed shoes.

Come to think of it, maybe it isn't so strange. Privatizing SS is a big income bonus for the financial industry and the wealthy only pay on the first $100,000 (or so) of income. Hell, they hit that limit in January.

Remove the cap and listen to them scream!