Even before the recent issuance of Tyler Cowan's Great Stagnation E-Book, Steve at Asymptosis and I have been speculating about what made the first three (or so) post WW II decades special and different.  At first, I thought they were different from the period that followed.  Now, I think they may have been different from any time - possibly even a golden age.  I'll have more to say about this, and about Cowan's book, which I know I'll have to read, over the next days or weeks.

For now, here's a look at productivity, which is central to at least part of Cowan's point.  Krugman's point in this post is rather different, but he included a graph on productivity that got me thinking.  So I dug up productivity data from the BLS website, which took quit a bit of digging.   Fortunately, Skeptic at Reality Base did the same thing, and identifies the data series - year-over-year non-farm productivity growth (% change) as PRS85006092. 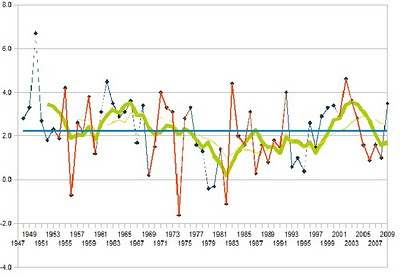 For the data series, values during Democratic administrations are in blue, Republican in red.  If there is any significance there, I'm missing it.  Like Krugman, I've added a 5-year moving average (dark green line.)  The faint yellow line is a 10-year average, which doesn't seem to add much.  The blue horizontal line is the entire data set average of 2.24%.  Krugman evidently used a different series - his values for the 5-yr average are in a narrower band, and the shape of the curve, while similar, is not quite identical.

The average line reveals a clear downward trend from 1966 to 1982.  After that - despite a rather directionless and mostly below-average decade from '87 to '97, the trend was toward higher productivity growth - until the nose-dive following the 2002 recession.  Since 2006, productivity has turned up again, while the economy has faltered.  As Krugman recently pointed out, this is not a typical result.

But my focus is on the Post WW II period before the turning point, circa 1980.  The era of falling productivity growth coincidences quite closely with what Allen Meltzer calls "The Great Inflation."  I suspect this is not a coincidence.

I haven't read Meltzer's paper yet, and have a lot of other homework to do.  For now, I'm fascinated by the difference between the first 3 1/2 decades of my life and what has happened since.
.
Posted by Jazzbumpa at 11:11 PM