Deficits in the Viet Nam Era

One of the remarkable things about the Viet Nam war was that it did not bust the budget.  WW's I and II led to big deficits, as have our excursions into Iraq and Afghanistan.  To make the point, here is a graph of deficit as a percentage of GDP.  To provide some context, dates from 1950 through 1980 are included. 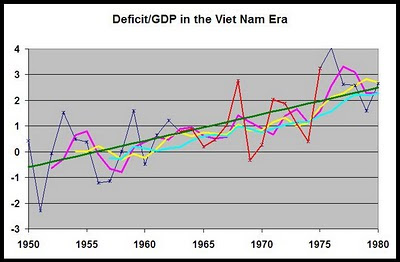 Despite Ike getting us established as early as 1955, the bulk of U. S. involvement came from Johnson's escalation in late 1963 through the end of the war in 1975.  These years are highlighted in red on the graph, or you'd never be able to pick them out.  Except for two specific years, 1968 and 1975, the period was actually quite frugal.  For context,  I've thrown on 3, 5, and 8 year moving averages, as well as the best fitting straight line in dark green.

The most striking feature of Viet Nam era deficits is that they are so remarkably unremarkable.  Why?  It's simple.  Revenues grew at about the same rate as expenses.

But of course. It never occurred to Johnson, a good Democrat, to cut taxes for the rich while he funded the Eisenhower/Dulles/ChaseManhattan wars and the programs comprising the safety net of that time.

Funny how no one ever mentioned that passed Ronnie Rayguns spending/tax cutting spree isn't it?

Here's what I don't understand: gross public debt/gdp was on a steady decline from '45 to '81. How is that possible when your numbers show deficit/gdp being positive in most of those years? Gotta look at the data sets, I think...