Of Deficits and Inflation - Part 3

I'm going to let the cat out of the bag right up front.  Looking at 100 years of data has convinced me that over that span there is no meaningful correlation between Federal budget deficits and inflation.  To be clear, this doesn't just mean the absence of cause and effect - it means no correlation at all!

Here are the the variables we're looking at.  First, Federal Deficits, as percentage of GDP. 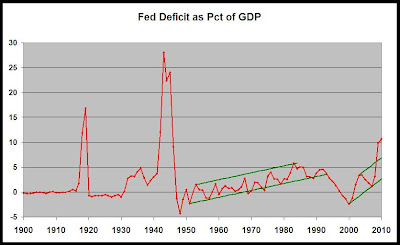 And CPI Inflation.  Data from the Bureau of Labor Statistics. 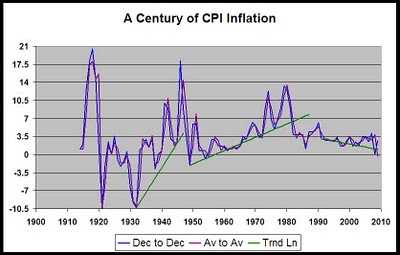 So far, in parts 1 and 2, we've looked at the post WW II period.  We'll get a somewhat longer view in this post.  And use a different, but related methodology.

In part 2 we saw the dramatic difference between the two periods before and after 1980, illustrated by taking the two periods as different data sets and doing some simple math - determining the slope of inflation apparently resulting from the deficit, with a defined time lag; and the correlation coefficient.   That gave us two data sets of over 20 points each, before and after the eyeballed date of 1980.

To determine what is happening over time at a more detailed level, I took data chunks of 8, 13, and 21 years duration and swept them across the entire data set.

Here, we'll look at the slope of CPI per Deficit/GDP from 1940 on, for the 8, 13, and 21 year chunks, plotted as a function of the last year of the chunk.  The longer time periods yield smoother lines and generally later responses to changes. 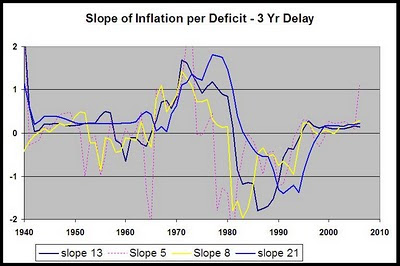 Full disclosure: I also looked at the slope of a 5 year chunk, as you can see from the faint dashed pink line.  It's jumpy, makes the chart busier, and doesn't seem to add much useful knowledge, so we'll ignore it.

Sure enough, this confirms that something dramatic happened right around 1980, as all three lines took a nose dive, just about in concert.  Also note that the 8 and 13 yr lines peaked in 1971, almost a full decade earlier, and slumped though the 70's before the big 1980 fall.

What occurred next was an actual reversal.  For several years, deficits led to decreases in inflation.  Here, "led to" simply means "preceded," and not "was the cause of."  It's very hard for me to believe that there is any credible line of reasoning that would justify a negative cause and effect relationship between deficits and inflation.   Then, another reversal occurred as all the lines work their way back toward zero.  I believe these reversals to simply be secondary data artifacts, resulting from the collapse of apparent correlation through the 60's and 70's (the primary data artifact.)

Let's look at the other parts of the graph: 1940 to the early 60's and from the late 90's on.  We don't find much there: mostly flat lines, close to and roughly parallel to the horizontal axis.  There is some irregularity in the 50's, as the brief, steep post-WW II deflationary event manifests itself in the data sets.

For the sake of completion, here is the same data presented without the 3-year lag - the slope of inflation in the current year as the deficit. 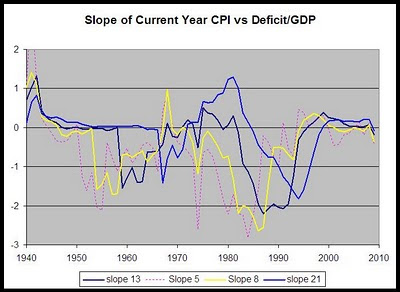 What can we make of this kind of relationship?  Through the 40's, when deficits and inflation were both at extremely high levels, there was no recognizable correlation between deficits and inflation.  Over the most recent decade, when deficits have soared to Reagan era levels and beyond, and inflation was fairly steady at a relatively low level - before stumbling face-down on deflation's doorstep - there was no recognizable relationship.  Also, except for the 60's and 70's, the time lag doesn't seem to be very important.

In between, the slope went from strongly positive to strongly negative.  Here's my take.  A pair of variables that exhibit that kind of relationship, vacillating among positive, negative and  next to nothing, have no fundamental correlation.  They can exhibit, in limited time frames, some apparent temporary relationship, whether due to common cause or some exogenous environmental effect - basically, a rising tide lifting different boats.  I call this kind of ephemeral relationship "coincident correlation."   If you only looked at the 50's through the 80's, you could easily believe that deficits caused inflation.  I think that is the primary data artifact, due to coincidentally simultaneous rises in both.

Hence my conclusion: there is no stable, meaningful correlation between deficits and inflation.

But - whatever was going on in the first part of the post war period apparently slowed in the 70's and stopped around 1980.   That was a time of secular inflation, which has since passed.  It's origins now seem mysterious.

What do you think?

I think you're right -- there's just too much variation and noise in the different slices, dices, and analyses of this data. I find it hard to derive any coherent, intuitively convincing story from it. Most or all that I come up with can be contradicted by a different slice or dice. This suggests to me no correlation, or no correlation that doesn't rely on some other data set for explanation.

But this -- totally in keeping with Modern Monetary Theory -- suggests that the sky-is-falling folks worrying about deficits/debt and hyperinflation don't have much of a leg to stand on.

On the hyperinflation issue: I read a passing mention in a comment recently saying that Weimar actually turned monetary policy management over to private banks in the 20s, and that's what caused the problem. When federal authorities took back that control, things got better. Anybody know anything about that?

It's hard for me to see any road from here to hyperinflation. Even moderate inflation looks to be pretty iffy at this point.

Weimar actually turned monetary policy management over to private banks in the 20s, and that's what caused the problem. When federal authorities took back that control, things got better. Anybody know anything about that?

Wow. I sure don't. Fascinating idea.