What the Hell Friday - The Depression of 1921

Austrian Economists and their acolytes claim that the depression of 1921, which was deep but short, (January 1920 to July 1921) refutes Keynesian economics, since the recovery occurred with no government action.   The corollary is that Government  action interferes with the economy, distorts asset allocation and other economic factors and either causes or prolongs times of economic hardship.

As is always the case with people who reason based on dogma rather than data, the 1921 depression is a cherry-picked instance.  I suspect they keep coming back to it because it is the only data point that is consistent with their view of the world.

For example, one can look at Federal spending and see that the Government did not run a deficit to recover from the 1921depression . 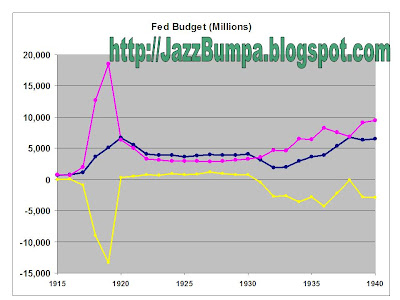 The blue line is receipts, the pink line is expenditures, and the yellow line is the surplus or deficit.  Sure enough, no deficit spending in 1920 or 21, following the deficits of the WW I years.

But what gets ignored is the entire economic background was different in1921 as compared to 1929.  First off, the graph indicates that in 1918 and 1919, there were sizable deficits.  In 1920, the budget ran a tiny surplus, and surpluses are slight through most of the roaring 20's.  So - the 1921 depression was preceded by two years of large deficits, the 1929 depression was preceded by several years of steady surpluses.

It is worth noting that the 1921 depression came on the heels of WW I.  Coincidentally, there was a sharp, rather short recession following WW II, as well. 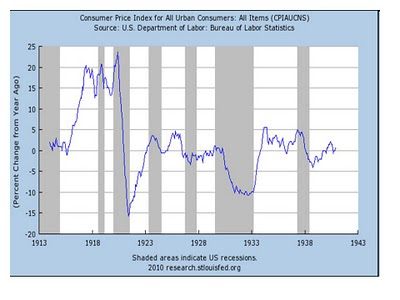 His point is that deflation couldn't have caused the lengthy 1929 depression, since the deflation in 1921was steeper and deeper, and that depression was short-lived.  Wow!  Look at that cliff-fall in CPI in 1921.  Nothing like that happened in the 30's.  OK - fair enough.  If everything else is equal.  We've already had a hint of how they weren't, but let's examine this graph a little more closely.  The years from about 1915 to 1920 were characterized by high inflation - way over 10% that entire time, and popping up above 20%, just before the crash.  On the other hand, the years leading up to 1929 were characterized by no inflation at all.

Let's look at Fed activity.  I was not able to come up with much information, but did find some on the St. Louis Fed website. 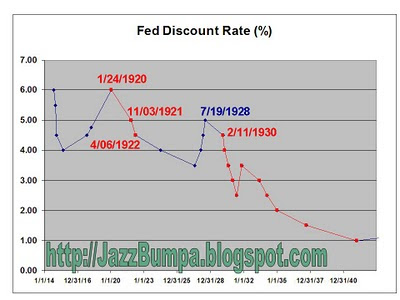 Here is the Discount Rate during years of both depressions.  Depression times are indicated in red, non-depression times in blue.  Selected dates of Fed activity are noted.  The rate was raised to 6% on 1/24/1920, and lowered on  to 5% 11/03/1921, and again to 4.5% on 4/06/1922.  A cynic might say the interest rate hike of 1920 helped bring on the depression, while the quantitative easing of 1921-2 secured its end, but we won't go there.  Based on this graph alone, it does look as if the interest rate situation were nowhere near the 0-rate bound in 1921, and might have been approaching it in the 30's.  At any rate, the statement that the economy quickly recovered after 1920 in the absence of fed and Government activity is simply false.

One criticism leveled against the Fed from a modern perspective (but not by Austrians) is that in the 30's there was no appreciation that during deflation real interest rates are higher than nominal rates.  Rates were going down, so the contemporary understanding was that easing was taking place.  Unfortunately, real rates were rising, and the economy was effectively being choked.

Another reason to criticize the early Fed is that they did not have a proper understanding of the devastating effects of deflation.  Parker continues (emphasis added):

Moreover, Eichengreen (1992) suggests that the episode of 1920–21 led the Federal Reserve System to believe that the economy could be successfully deflated or “liquidated” without paying a severe penalty in terms of reduced output. This conclusion, however, proved to be mistaken at the onset of the Depression. As argued by Eichengreen (1992), the Federal Reserve did not appreciate the extent to which the successful deflation could be attributed to the unique circumstances that prevailed during 1920–21. The European economies were still devastated after World War I, so the demand for United States’ exports remained strong many years after the War. Moreover, the gold standard was not in operation at the time. Therefore, European countries were not forced to match the deflation initiated in the United States by the Federal Reserve (explained below pertaining to the gold standard hypothesis).

So, countering the effects of the depression we have strong U.S. exports.  And what's this about gold?  Because of WW I, the gold standard was abandoned by the involved countries.  Later in the 20's the U.S. and Europe went back on the gold standard, but at the time of the 1920 depression, nobody important was on it.

This is not a trivial point, when we consider he part gold played in the Great Depression of 1929.  Parker again:

Summary:
The depressions of 1920-21 and 1929-4? (pick an number) occurred in very different circumstances.  My cursory check uncovered this list:

Every bit of this gets ignored by Austrians.  Some of this is probably more important than the rest.  I find the gold facts to be especially intriguing. There are probably more differences than can be discovered in 20 minutes of fumbling around on the intertubes.   I welcome any additional information.

UPDATE:
In comments, J points out some other relevant historical information.  In addition there is the matter of debt ratio that I spoke about in a different context recently.  In 1920-21 the ratio of debt to GDP increased from about 150 to 190% during the course of the depression.   In 1929, this ratio started at about 190%, and by 1933, had increased to 299%.

Interesting, jzb. Another factor (really historical, rather than macro.) overlooked by the apologists for capitalism, whether the austrian nut-bugs, or supply sider MBA-bots, concerns production, and the relation of production to deflation.

After WWI there was a surplus of produced goods (not the same as surplus in terms of budget)--like massive amounts of grain, or industrial goods (check some US history data). That held throughout the 20s, and even 30s. Not sure what the right indicator is (if one exists), but at times the Fed asked, in fact ordered farmers NOT to sell goods, or burn crops, even slaughter cattle, etc, because prices were so low (and the money deflated). There wasn't sufficient demand, and gluts of items, usually (compounded by other problems,like banking, loans, employment). A mess.

'21 was not that big of a problem for wealthy, but it was for the farmers and workers--of course, the sh**t really hit the fan in '29, when there was nothing to support the speculation and credit, which forced some govt. intervention/planning....at least, that's what a somewhat historical analysis suggests...

So, you are correct insofar that the austrian nuts (or supply siders) don't quite understand the need for some govt. planning, at least as a way to avoid massive unemployement and poverty, yet... many rich boy GOPers don't mind high unemployment, at least in short run (tho' eventually there aren't enough consumers to buy products...).

My beef about the Austrians is that they have this neato-keen model that might apply to some economic downturns (like 1921), but insist upon applying it to all economic downturns even though the data says that the majority of economic downturns aren't the readjustment downturns that their model predicts. In 1921 we were coming off of WW1, a bunch of young men had just been made jobless by the shutdown of war industries and the demobilization of the Army, there was, in other words, a lot of loose resources sloshing around the economy. No banks collapsed in 1921 because the depression was so short that people didn't exhaust their savings paying back their loans, meaning that once demand picked back up, there was capital available to borrow to expand production. None of that was true in 1929, by 1933 half the banks had collapsed and the entire financial system was in tatters because as you point out, when real rates are so high for so long of a time, people simply can't pay back their loans taken out in inflated dollars in the new more-expensive deflated dollars. The deflation was so severe that half the country basically moved to the very inefficient barter system for most economic activity -- there simply was no green to be had, whether it was for paying taxes to the local county government or whatever. My grandmother remembered teachers being paid mostly in eggs and cornmeal because that's all that people had to give the county government for their taxes, and the county government couldn't just seize all their property and sell it at auction, because who would have bought it for enough money to meet back taxes given that the whole problem was that, well, nobody had money?

The other thing that J points out is that the depression of 1921 NEVER ENDED FOR MUCH OF AMERICA. My grandmother grew up as a sharecropper's daughter in the 1920's. When the economy slid into the Great Depression, she never even noticed it, because they'd been in the Great Depression for most of the 1920's -- the price of cotton (their main cash crop) was in the dumps for both of those decades. They mostly were subsistence farmers, little different from some Guatemala peasant in the back country, growing most of what they ate and using their cash crop to pay the rent on the land and buy what little they absolutely needed in order to survive.

Interesting insights guys, and lots of new information for me.

I think J's comment about goods and commodity surpluses, and BT's about subsistence living for poor farmers are two faces of the same phenomenon.

Tux - that's a heart-rending story about your grandmother. I don't know anything about my family's history during that era.