Comments by J and Bad Tux in Friday's post got me thinking.  That blog entry discussed exogenous factors contemporary with the 1921 depression.  But what about endogenous factors?  What J and BT suggested is that this depression was characterized by a surplus of finished goods, commodities and labor resources.

There is an old description of inflation as too many dollars chasing too few goods.  Here, we see deflation as not enough dollars and too many goods - exactly the opposite.  My hypothesis on the difference between the 1920 and 1929 depressions now is that, in addition to the many exogenous factors which could have influence the depth and duration of these deflationary depressions, there is a fundamental endogenous difference as well.

The 1920 depression resulted from supply factors - an over-abundance of labor resources and material goods that the economy could not absorb.  This difficulty was made considerably more difficult by restrictive fed interest rate policy.

The 1929 depression resulted from demand factors - the severe loss of wealth and purchasing power in the general population.

Any ideas on how to gather the relevant data are welcome.

Meanwhile, here is an excerpt from the Wikipedia entry on the 1920 depression, relating to Government activity.

President Warren Harding convened a President's Conference on Unemployment at the instigation of then Commerce Secretary Herbert Hoover as a result of rising unemployment during the recession. About 300 eminent members of industry, banking and labor were called together in September 1921 to discuss the problem of unemployment. Hoover organized the economic conference and a committee on unemployment. The committee established a branch in every state having substantial unemployment, along with sub-branches in local communities and mayors' emergency committees in 31 cities. The committee contributed relief to the unemployed, and also organized collaboration between the local and federal governments.

The Unemployment Conference stands as a watershed in federal policy with respect to depressions and unemployment relief. In sharp contrast to the total inaction and benign neglect that had characterized the response of previous administrations, the Conference not only conducted studies aimed at preventing future depressions through better management of the business cycle, but also provided practical assistance to local committees and encouraged a variety of local actions. These included the stimulation of public works and clean-up projects, advice on the organization and techniques of fund raising, and exhorting employers to adopt "work-sharing" plans. The Conference soon became an effective clearinghouse, disseminating ideas that local committees had found effective in providing jobs and temporary relief.

Field representatives were dispatched to assist local committees and to monitor their progress. Thus they not only facilitated the sharing of ideas, but provided vital situation reports by which overall progress could be measured. Reports from hundreds of cities provide interesting insights into conditions, responses and attitudes toward relief. In a few instances, field representatives discovered that very little was being done and that city fathers were not interested in cooperation. In such instances, the realization that their inactivity was being reported usually had the effect of prodding them into action.


Here is a better graph of Fed interest rate movements around the time of the 1920 depression. 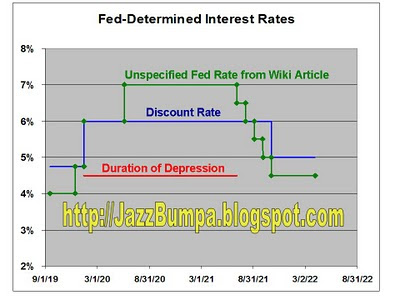 Clearly, and contrary to the Austrian allegations, there was considerable government and Fed activity aimed toward influencing the business cycle.
.
Posted by Jazzbumpa at 11:49 AM