In reading This Blog, I found the following graph linked in one of the comments.

Most of the time since 1870, Total Debt has been between 130 and 170% of GDP.  Whether this is a good thing or not, I'm not prepared to say.  But, we can see that whenever the debt ratio gets above that range, bad things are happening.  In 1933, FDR had just been elected, and the New Deal had not yet happened.  As the New Deal kicked in, with all that wasteful government spending, the ratio FELL.  Hmmm. 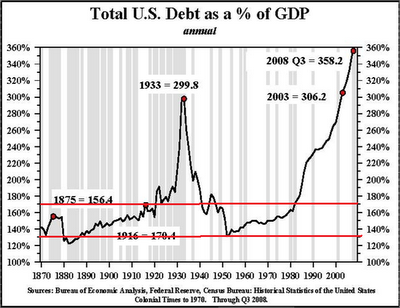 While the debt ratio was unwinding during the 30's, the only blip up came around 1937-8, when FDR made the blunder of attempting to balance the budget long before the economy had fully recovered.  Except for the necessary spending caused by WW II, it stayed within the historical limits until the early 80's.  It climbed a bit under Eisenhower, seems to have leveled off under Kennedy and Johnson, then inched up in the 70.'s   During the Reagan years, the climb was almost vertical.  Clinton slowed things down for a while.  Looks like the curve started to shoot up again, late in his term, while he was balancing the budget.  (Wha . . .?)

The Bush years piled on the debt.  Cutting taxes, while lying the country into a war which may never end, has to have some sort of economic effect - right?

The depth of the Great Depression corresponded with the 1933 peak.  The graph only goes through 2008, so I don't know where we are now.  But the 30-year trend looks unsustainable, and the unwinding is bound to be very painful indeed.

Yes and no. The thing about those piles of debt, it's all dollar-denominated. If a check from the Federal Reserve made out to every debtor for the full values of his debts arrived at each household in America, we could print that number to pretty close to $0 mighty quickly.

At which point the Austrians object, "but that's the same thing as transferring assets from the investor class to the consumer class!" Well duh. The top 1% of Americans own 70% of America, including the majority of that debt, and the inflation created by printing all these dollars, by reducing the value of the dollars they were paid in, would reduce their wealth too, to the point where they might only own 30-40% of America at the end. And I'm supposed to feel bad about that... why?

I'm not suggesting any specific kind of cause and effect related to debt, per se. The debt level is a symptom.

Compare that graph to this one.

In both cases of high debt, much of it was in the form of leveraged speculation - stock market, real estate, abstract financial instruments that nobody understands or can rationally evaluate. Each also occurred at a time of extreme wealth disparity.

I don't think that is a coincidence.

The situations are rife with complexity. But, sooner or later, in some fashion, debt has to be repaid, either by the borrower, or the lender. Lenders know this (now, not 5 years ago,) so they aren't lending.

I don't think the unwinding of debt actually transfers assets to the consumer class as much as it is a devaluation of assets (=deflation.)

Those with the greatest assets lose the most, numerically, but big whoop, they have more than they could ever need or use. So, even though leveling, of a sort (even in the best of times, the top 1% gets more than 7% of the income,) takes place, the greatest pain is at the bottom, just like in the last great depression.

The other possibility is actual blood in the streets. In that case, all bets are off. Anyone's head might roll.

Oh, I agree that WASF, but not because of dollar-denominated debt that can be printed away but, rather, because our oligarchs have no intention of doing anything other than using this to ram a rod up our collective asses, good and hard. It was only the threat of a Communist revolution that allowed FDR and his set of oligarchs to overrule the Republican set of oligarchs the last time, and there is no such threat today. If we have a revolution today, it will likely be a fascist one complete with jackboots. WASF...

The graph doesn't specify, but I think this is the total of all debt, public and private. Underwater mortgages are part of it, as are the collateralized debt obligations into which they were packaged, LBO's, borrowed money to speculate on oil and other commodities, etc.

This non-Gov't debt can't be inflated away (can it?), and I'm not convinced the Fed would totally be capable of inflating away the public debt. even if they wished to - which they don't.

If we are in the grip of deflation - which I believe to be the case - then the Fed is powerless, and debt will unwind in whatever way it can; to the likely detriment of both debtors and creditors.

Yes, the possibility of devolving into fascism is real. This is one of the tings about Shrub that terrified me the most. Teabaggers will welcome it with open arms and cocked triggers.

I pointed out how the Fed could inflate the private debt away -- simply send a check to every debtor for the full value of his debts, and cover it with printed money. Given that the majority of this private debt is held by 5 banks and Fannie/Freddie/Ginnie, identifying the majority of private debtors is fairly easy.

What is lacking is not the ability, but the will. Which is why WASF....

That kind of socialistic intervention would bring on the fascist revolution fer sure.