Where Has All The Money Gone, Pt IV - Dividends

Note:  This will go up at Angry Bear Tomorrow morning, so I'm using the numbering system and links to this series at that location.  Originally I posted it here at RB, though in substantially different form, but the data source for my graph has disappeared into the ether.  I rebuilt the graphs using data from the primary source.

We've already seen in previous installments of this series that since about 1980, I, corporate profits have soared, II, the slice of profits going to finance has soared even more, and III, wages have stagnated.  Here we see what corporations have done with all that money.   There is a limited selection set: pay taxes, distribute as dividends, pay down debt, invest, make acquisitions, speculate, and hold as cash.

Here is a look at taxes through 2008 and dividends through 2010, as percentages of profits; data from BEA table 7.16, lines 19, 20 and 38.   For my purposes, profits are divided among taxes, dividends, and all the other things mentioned above, which I'll call the Residual. 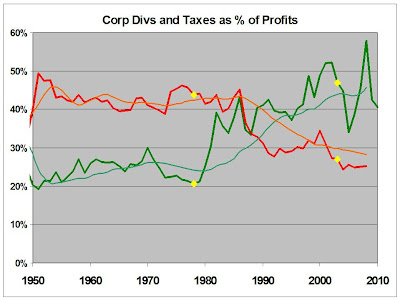 Dividends/ Profits are in green; Taxes/Profits in red.  I've added 13 year moving averages to clarify the trends over time.  The Dividend percentage bottomed in 1978 at 20.6%.  I've marked that year on both curves with a yellow dot.  After that, dividend payments took off sharply and have been mostly in the 40 to 50 % range since 1989.  The tax rate on dividends was reduced to 15% in 2003, also marked with a yellow dot, but I don't think that change has had much effect on dividend payout.  The gyrations in the payout percentage since 2003 are largely due to the denominator affect, as profitability increased after the 2001-2 recession, and plummeted during the recent Great Recession.  Notably, 2010 profits are the highest ever.

In 1978, the 13 year averages were 24.2% for dividends and 42.4% for taxes.  Those averages are now 28.3, and dropping; and 45.7 and rising, respectively  45.7 and rising for dividends; and 28.3% and dropping for taxes - essentially a reversal of positions.  The net result is a massive funneling of money from government to dividend recipients who now are paying only 15% tax on their dividend income.

This is not only "Starve the Beast" in action, it is a massive redistribution of wealth into the hands of those who already have the most.   Say what you will about the relative efficiencies of the private and public sectors in using resources, the public sector places money into the hands of people who will spend it and keep the economy moving.  The private sector largely funnels it into rent seeking.

For the sake of completeness, here is a look at the Residual - as defined above - with a 13 year moving average and a best fit straight trend line. 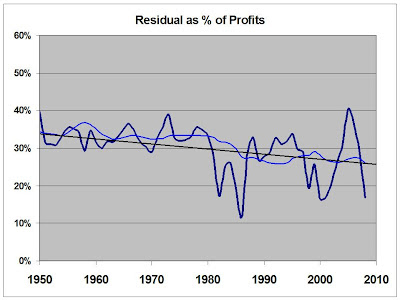 This provides a partial explanation for Jon Hammond's observation that net corporate investment has been down over the duration.  There is less residual to invest.

Bottom line:  Corporate profits have been skewed to dividend payments, to the detriment of worker salaries, government tax revenues, and corporate investment.