I think the idea that consumption depends primarily on wealth is intuitively weak because consumption is aggregated over the population, while wealth is concentrated in a small segment of that population.  A person with little or no wealth will spend the next dollar meeting some unsatisfied need, while the person with lots of wealth has the option of devoting it to rent-seeking or accumulation in an off-shore shelter.  According to data now more than a decade old, the richest 1% of households owned 38% of all the wealth; the top 5% owned over half, and the top 20% owned over 80% of the wealth.  The trend towards rising inequality started in the mid 70's.

A couple of proxies for wealth are home and common stock ownership.  Excluding home-ownership, the wealth concentration is even more extreme, with the top 1% owning 50% of the non-home wealth.  It's difficult to determine the actual amount of stock ownership in private hands.  A number arrived at by elimination leaves 36% among households, non-profits, endowments and hedge funds.   Therefore, realistically, the bottom 99% of individuals share about 18% of all stocks with those other institutions.  At the bottom end, the lowest 20% have either no wealth, or negative net worth.

People at the low end live close to subsistence.  People in the middle live pay check to pay check.  For the vast majority of the population, the next marginal dollar has a high probability of being used as a consumption expense.

That is my narrative to support the idea that consumption must necessarily be strongly dependent on income.  Now, let's look at some data, through 2009, from the U.S. Census Bureau, Table 678.  The first graph shows Disposible Income (green) and personal Consumption Expenditures (red) back to 1929. 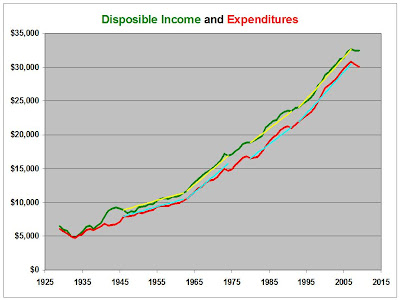 A careful look suggests a narrative about this relationship.  First, consider the depression years.  From 1932 to '34, consumption averaged 99% of disposable income.  People had needs, and used their limited incomes to satisfy them, as best they could.   Then, during WW II, with rationing and other constraints, saving was forced, and consumption was artificially low.  Consumption reached an all-time low of 73.3% of Disposable Income in 1944.  Since shortly after WW II, changes in Disposable Income and Consumption have been in virtual lock-step.   I've put lines in a contrasting color connecting selected points in the Disposable Income curve, and dropped parallel lines for the same years onto the Consumption curve.  Since 1951, very wiggle in Income corresponds to a wiggle in Consumption.

Here is a scattergram of the two subject variables, with a best-fit straight line provided by Excel. 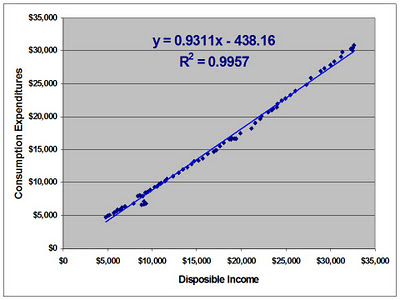 As has been pointed out to me, correlation is not causation.  But - when one can construct a rational narrative that explains the data, the two series display absolutely congruous motion over several decades, and R^2 is over 0.99, I'm willing to go out on a limb and say the burden of proof is on the denialists.

Here is a look at Consumption as a percentage of Disposable Income, since 1951. 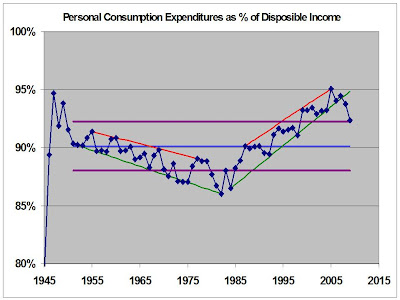 The data points, average, and an envelope one Std Dev above and below the average are all displayed on the graph.  Despite having two clearly defined and opposite tending trends, this is still a well behaved data set, with 39 of 58 (67%) of the points within the envelope.

The two minima are in 1982 and 1984, and the bottom trend lines converge in 1982, so that is a reasonable time to define as the break point.  This also suggests a narrative.  During the post WW II golden age, typical wage earners moved incrementally above the subsistence level.  This gave them the opportunity to save a little bit.   Since 1982, as wages stagnated, it became necessary to devote a higher percentage to Consumption.  Sure enough, savings grew through the mid 70's, and have dropped dramatically since 1982, as this FRED graph demonstrates.

I won't say that Consumption Spending is solely dependent on Income.  But I will say that it is strongly, and even predominantly, dependent on income.   Wealth might enter into the decision for those who actually have some, but they are in the minority and have few needs that can be satisfied by the next dollar of consumption.

My conclusion is that the best solution to the aggregate demand shortfall problem is to put money into the hands of the people who will actually spend it, and that the best way to do that is to give them jobs.  As stop-gaps, various relief and welfare programs also have their place. This is the rational for fiscal stimulus.  Federal spending programs provide real jobs for real people, and they will spend their earnings.  Arguing about whether this is hole-filling or pump-priming strikes me as being just about as important as arguing about how many angels can dance on a pin head.

Posted by Jazzbumpa at 3:45 PM

So Kramer’s Rho is 0.99. If I didn’t know better, I’d regress back to early childhood and cry like an infant. I think we understand intuitively that middle class consumers represent the engine for economic activity, i.e., the demand side, not the supply side as propagandized by the self-aggrandizers.

Historically, there is no coincidence in income equality when comparing the Great Depression versus the Great Recession. If memory serves, inequality is worse today than it was in 1929, which is what makes this recovery is so elusive. After three decades of decline, the middle class is too weakened to trigger any significant increase in aggregate demand, just as it was in the 1930s.

Here is one problem with Keynesian theory: It assumes a closed-loop economy where the marginal propensity to import exerts a negligible influence on domestic economic performance. Look at it this way: When you measure the accelerator effect of various kinds of economic stimulus, you adjust for savings rates and other factors to measure how long stimulus money remains in circulation. In a global economy where the current account balance is substantially negative, stimulus money does not stay inside our borders unless it is precisely targeted. You end up stimulating the economies of your trading parters but little else. So you need to factor in the marginal propensity to import as well as savings rates and other factors. I think this helps explain why the last stimulus achieved less than expected results (notwithstanding the advice of Krugman who argued for a much larger stimulus - more than double - instead of the one we got).

I think your analysis offers another compelling argument: Unless we rebuild the middle class with tax tables that move wealth back towards the center, stimulus accomplishes very little. It might take something on the order of post WWII tax rates to fully restore the middle class, and there is no other remedy that I can think of. Unfortunately, you can buy the opposite argument with Super PAC$$$.

The cephalopod is not an optimist - at least with regards to progress in human affairs.

Attractive section of content. I just stumbled upon your web site and in accession capital to assert that I get in fact enjoyed account your blog posts. Any way I’ll be subscribing to your augment and even I achievement you access consistently rapidly.
MCO26012 - Scotch-Brite Quick Clean Griddle Liquid

It's important to remember that income -> consumption was a central plank of Keynesian theory from the 1930s through the 1970s. The more recent view that the important relationship is wealth -> income (aka the Permanent Income Hypothesis) was a conscious reaction against the Keynesian view by Lucas and others. Needless to say, i agree with you that the older view was more accurate.

In response to octopus, the propensity to import is a standard feature of any Keynesian multiplier. So yes, stimulus is less effective in an open economy. But less effective is different from not effective, especially in the US where imports are only ~15% GDP. Tax and savings leakages are normally more important.

Thank you for this comment - and for tracking down this post. I did not realize that I was resurrecting a Keynesian view, or that the alternate view was specifically anti-Keynesian.

This really does put it all in a new light. I'm also working on another follow-up post.