Republicans - All Wrong, All The Time, Pt 16: Post WW II Recessions and the Great Stagnation

Over at Angry Bear, Cactus Mike Kimel has a series of posts running on recessions since 1929.  Part 1.  Part 2.  More to come, stay tuned.  By the way, if you want a real hoot, read Jimi in the comment section.  His divorce from reality, negation of hard data, and objection to analysis that points specifically and directly away from his preconceived world-view is stunning.  But, alas, it's also typical of glibertarianism and other versions of right-wingery.

Cactus Kimel has been extraordinarily accommodating of Jimi and other useful idiots who invade AB.  In other posts, he has repeatedly shown data in ways that refute all of their objections to the conclusions that the data inexorably demonstrate.  The idiots response is to always raise a new objection.

I've made some graphs of quarterly GDP change since 1947.  Before then, only annual data is available.  Data source is http://bea.gov/national/index.htm#gdp.   I retrieved this data set a couple of years ago.  It is based on chained Yr 2000 dollars.  I suspect the data set has been revised to Yr 2005 dollars (or some such) by now, but the picture won't change.

The first graph shows the familiar collapse in GDP that I've demonstrated before with the Yr over Yr change in annual values. 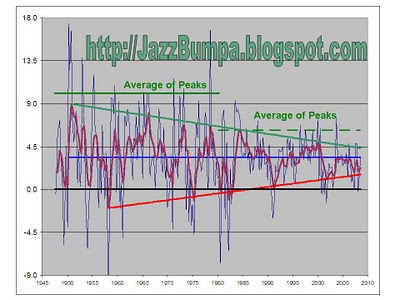 The blue line traces the quarterly GDP change numbers.  The heavy blue line is the average over the data set, 3.4%.   The purple line is a three-period exponential moving average of the GDP change values.  The slanted red and green lines define the collapsing envelope that contains these values.

This is what is sometimes called "The Great Moderation."   The idea of moderation is based on significantly reduced volatility in measured GDP change.  My contention is that this is a data artifact caused by the slow collapse of GDP growth over the last 60 years.   The simultaneous collapse of the M1 Money Multiplier can hardly be a coincidence.  I call this THE GREAT STAGNATION.  In a response to one of my comments, Cactus Kimel called it the exhaustion of  "this variety of Reaganny pseudo-capitalism."

Here is the same data with some different emphasis. 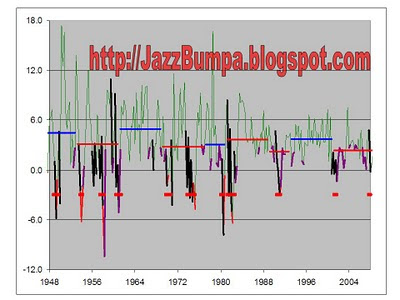 Here the GDP change line is in green.  Times with two or more consecutive quarters of negative GDP change are traced in red.  Officially recognized recessions are indicated by a bold red horizontal line segment.  The black traces indicate the quarter before and the quarter of negative change, whether leading into a recession or not.  The purple traces indicate consecutive quarters of poor growth, arbitrarily selected as 3% or less.  The horizontal red and blue lines indicate the average GDP change during an administration.  Kennedy-Johnson and Nixon-Ford are both considered single continuous administrations.

Here is how they stack up

Striking features:
1) Recessions are a characteristic of Republican administrations - not exclusively, but to an overwhelming extent,
2) The longest periods without recessions were the '60's and the '90's, the only times that Democratic administrations had two full terms,
3)  The moribund Carter administration is within decimal dust of  America's nostalgic golden age - Eisenhower's 50's,
4) GDP rose steadily during Clinton's term, and his average edges out that of St. Ronnie,
5) Bush I was the worst - Bush II was the worst II.  Actually, W's numbers appear better than they actually are, since the data set ends in mid '08, and his worst quarters aren't reflected here.

Bottom line - Republicans are bad for the economy, bad for business, bad for America.  This has been true for almost 100 years.  But, of course, if you're a right-winger, facts, data and analysis mean nothing, and ideology trumps reality - again.
Posted by Jazzbumpa at 11:12 AM