Mark J. Perry reports on the latest world trade data from The CPB Netherlands Bureau for Economic Policy Analysis.  He presents a graph from 2000 on showing that the levels of world trade and world industrial output have both reached new post-recovery highs.

He takes this to be very good news, and draws some broad conclusions.

Bottom Line: Both world trade volume and world industrial output reached fresh record monthly high levels in January. Trade and output are now far above their pre-recession levels, providing evidence that the global economy has made a complete recovery from the 2008-2009 recession. For the U.S., the annual growth rates for exports (10%) and industrial output (3.5%) reflect the underlying strength in America's manufacturing sector.


The graph tells me rather a different story.  I went to the source, got the raw data back to 1991, and made my own graph. 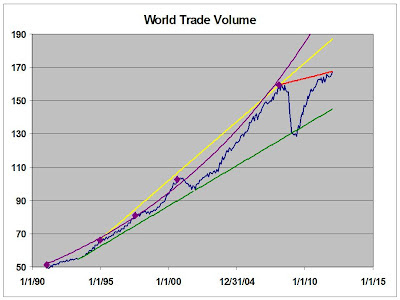 It's true that there has been a V-shaped recovery from the staggering decline that occurred during the 2008 financial crisis.  It's also true that there is a new post-recovery high.  But I tend to look at graphs of time series data in terms of trends, and have decorated the graph accordingly.

Now, it looks as if there might be a new top limit to growth.  The red line connects the top just before the crash with the new top that Mr. Perry finds so exciting.   If this holds, then going forward the data will be contained in a collapsing envelope.

Here's a close up view of the crash and recovery.  I've added some purple lines connecting detail level peaks during the recovery. 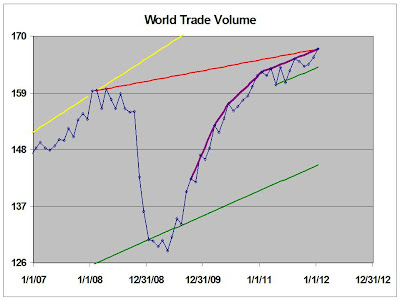 The purple lines appear to be approaching the red line as an asymptote.  Alternatively, the metric these points represent might be rolling over and approaching another decline.  Either way, there is a clear loss of momentum as the recovery ages.

I don't have a crystal ball, and  I'm not going to make a prediction about the future of world trade. But it's clear that the historical trends no longer apply, and I do not share Mr. Perry's optimism.

Would you say that the readjustments that we are seeing in growth rates are an indication that previous growth rates were artificially being held high by speculation and credit growth?

That's a good question. I have a hard time wrapping my head around it, and really can't say.

If energy process stay high, that is another factor that should put a damper on world trade.

Maybe off-shoring will reverse in a big way, and that will bring down world trade. Maybe China will stop growing at such a fast rate.

I do think we have entered a new era, but have no clear view of what it is going to mean.