Where Has All the Money Gone - Part 1

Here is the subject graph, data from FRED. 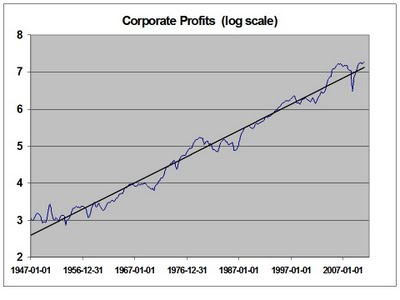 Art: "Some wiggles, but pretty much a straight line since the mid-1950s. Subject to interpretation, of course. But I'd say that the last decade is not extraordinary. It looks extraordinary on Graph #1, but it is just part of the exponential curve."  Graph #1 is at his post.  Same data, linear scale.

Me:  Subject to interpretation: here's mine.  I think the straight line skews ones vision into thinking it's real  I see a curve, even with wiggles, that has increasing slope over time.  Let's parse this out in chunks and see what happens.  I'm suggesting that if the data were truly linear, mining it in even the most favorable, cherry-picked way would not reveal any kind of trend.

Instead, we see this:  Time segments with trend lines. 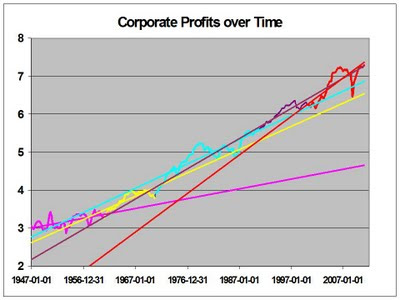 It's busy, but let's sort it out. Pink segment is 1947-60.  Yellow is 1961-70.  Light blue is 1970-90.  Purple is the 90s and red is the naughts.  Slopes increase steadily over time.  The best fit purple line includes data from 90 to now.  Yellow, blue and purple slopes are not dramatically different.  The red segment slope, however, is.  Despite topping out in the middle of '06, taking a nose dive, and only making a recent new high by the slimmest of margins, the last decade has a dramatically different slope than any other time.  And this is on a log scale!

For context, remember what has happened to GDP. 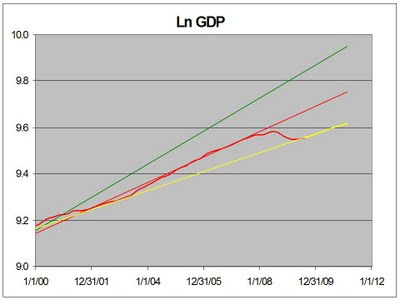 As I commented to Art:  "But the truth is that Corporate profits really have soared while the rest of us have suffered. Indeed, there is a huge shift, starting in the mid 80's, of all times.  And there is your great stagnation."

Looks like trickle down economics worked real well doesn't it. To prove it, just flip your graph and wa-la, you have your proof that Regan's plan worked. LOL

Here are my thoughts on it.

Well, then. The answer may be obvious, but the question must be asked: If profits are so high, why isn't the economy better?

There probably are a million answers to that, but I'll volunteer one: "Supply-side" economics is an incomplete concept. The concept is "supply and demand".

Now you're getting all reality based.

I pretty much agree, but rather than service in general, I'd focus on the finance, specifically.

Supply side economics isn't incomplete. It is a complete and utter sham. The problem is misallocation of resources by 1) skewing wealth into the hands of the wealth, and 2) funneling resources into financial speculation rather than practical investment - as you narrowly defined it in your recent post.

Speculation is a form of rent seeking and it's unstable. Hence the rolling bubbles over the last decade.

But nothing is being done.