Where has all the Money Gone, Part 1.5.1* - An Even Closerer Look at Corporate Profits - Finance Sector

Following Art's lead here, I'm looking at the profits of the finance sector as a percentage of total corporate profits, data from FRED.

Art posted a graph like this one (No. 3 at the link.)  I added some trend lines. 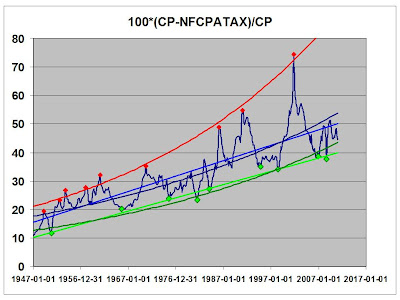 Remember, corporate profits have grown at an increasing rate since WWII.  (More here.)

The finance sector provides a vital function.  It is there to facilitate and enable the wheels of industry to turn.  What has happened in the age of deregulation and lax taxation is that the finance sector has come to dominate the economy.  This is madness. And here is your Great Stagnation, folks.  I've said repeatedly that the GS is due to misallocation of resources.  Here is your proof.  And we've been here before.  It wasn't good.

I wondered it there was a break point around 1980.  I don't think there was.  Here we have a linear trend line in dark green for the data through 1980.  It's a lousy fit to the data, of course.  The exponential trend line for the entire data set is shown again in blue.  The exponential trend line for the pre-1980 segment is shown in bright green.  To my surprise, it actually lies slightly above the blue curve.  This suggests that the trend of the pre-1980 portion is a good predictor of the tend for the entire set, so nothing remarkable happened along the way.  Nothing beyond the fact that we have an exponentially increasing portion of an above exponentially increasing amount going to leeches.  No wonder we're being bled white. 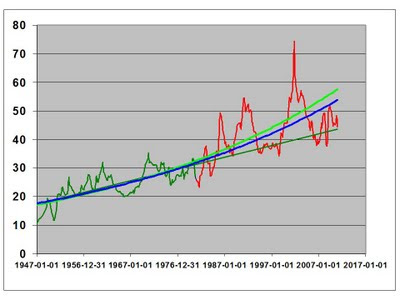 Update 2:  Back to the first graph.  What do you make of the expanding envelope - a huge increase between peaks and valleys?  Could this be an indicator of instability?  An exponential increase must eventually be broken in some way - perhaps by a total collapse.  I am seriously frightened.

Labels: current events, economics, history, we are so screwed

So what do you call that numbering system -- the Doohickey decimal??

I like the way this works. Same topic, different approaches, you and I. It creates some perspective and gives depth to the analysis.

I have a premise about the changes since 1980. As you point out for your graph, "the trend of the pre-1980 portion is a good predictor of the tend for the entire set, so nothing remarkable happened along the way."

A key observation. I think many graphs would show "nothing remarkable", if anybody was looking for it. I find the same pattern in total debt, here. Nothing remarkable happened along the way. Debt simply kept growing. There was no change in the trend.

Here's my premise: It's not that we elected Reagan and Reagan changed everything and then profits went up and debt went up and all. That's not what happened.

We elected Reagan because we needed policies like his, in order to maintain the trends of profit and debt and all. Reagan was not a change. Reagan was just the same, just more of the same, at a point when "more" was the only thing that could keep those trends on track.

For me, this takes all the politics out of it.

I do not agree, of course, that we needed to keep those trends on track. But everyone in charge seemed to think we had to. And the Reagan-landslide voters apparently thought so, too.

Yes - our clash of ideas is both informative and fun.

Here's a clash. The topic of this doohickey decimal (brilliant!) numbered sub set is the ONLY thing I've looked at that did NOT change circa 1980.

Reagan changed everything; he changed it for the worse; the bitter fruit we now harvest are what he sowed, and it's going to get a whole lot worse.

Certain trends were already in place - such is the nature of capitalism. However, before that senile fool became Prez, capitalism was reined in by regulations, strong unions, and high tax rates. This gave us a strong, vital middle class and the golden age. All of those things are now gone, and we have the great stagnation leading into the Great Recession.

As much as I would love to blame Reagan for everything, at least some of the post 80 trends started in the early 70's. And deregulation started under Carter.

But I cut St Ronnie no slack. Policy matters and politics determine policies. He enabled, aided and abetted all of this, and gave aide and comfort to the perpetrators. WE never needed policies like his. The rent seekers did, however. He initiated the great sell-off of this once great nation to transnational corporatists. In my mind, that was treason.

The list of U. S. presidents, almost from the vary beginning is a rouge's gallery of scoundrels and fools. Reagan was not the worst ever, but is certainly the worst of the post-Hoover 20th Century. W was worse than Reagan.

The exponential increase is already broken. Everything now is fix it or forget it. The new exponential curve runs downhill. Just like last time.

At this point, policy is crucial. And yet, economists say things like What "policy choices," you may ask? Well, the answer is that I don't know.

Sad to say, our work is more relevant than theirs.

I saw an article recently listing several things that could be done without raising the deficit. Just because Noah is flummoxed, it doesn't mean the entire profession is.

OTOH, you and Mark and I are discovering things by looking at real data and attempting to draw reasonable inferences. We aren't trying to accommodate a model, validate a theory, or rescue some point of view.

We are free to be open-minded and data-driven, because we don't think like economists.