This is another swipe at Henderson.

Data in his working paper (Table 2, Pg. 15) clearly indicates that gross private investment increased during the new deal at a higher and more enduring rate than in the post war period.  Mike Kimel makes this point at AB, using NIPA data, but you can use Henderson's own data against him, and I love that.

Here is growth of gross private investment following designated base years of 1933 and 1944, using both Henderson's data and the NIPA data.  Data sets match very nicely, though Henderson's ends in 1950 (more cherry picking.)  You can quibble over what year to take as your base, but it won't change things by very much.  Mike Kimel uses 1932 and 1944. 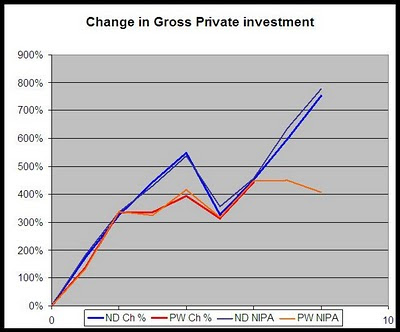 Once again, except for the anti-New Deal year of 1938, the New Deal trumps the post war period in rate of growth, and duration of growth.   And this information was staring Henderson right in the face.

The BIG IDEA to be gleaned here is that Government investment does not drive out private investment.  The pie can grow.
.
Posted by Jazzbumpa at 2:42 PM