The U.S. Economy is Dying

At econbrowser, James Hamilton posted a graph like this - GDP per capita on a quarterly basis, since 1952.  Quarterly GDP data are available back to 1947.  Monthly population data only goes to 1952 (average of 3 months is used for the quarterly figure.)  In comments, he was kind enough to share the methodology, so I was able to make my own similar graph.  I wanted to do that because something struck me.  Do you see what it is? 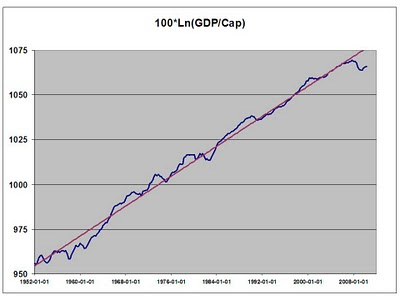 First, lets dwell on the obvious.  The point of using a log scale for the Y-axis is to present constant growth as a straight line.  For comparison, I placed a best fit line over the data.  Of course, economic growth is not constant.  There are business cycle variations and long range trends.  So the deviations from linearity tell a story.  The thing that struck me, eyeballing peak to peak (in a fit of peaks), is the slopes of the connecting lines have been in decline for decades, with a major inflection point somewhere around 1980. 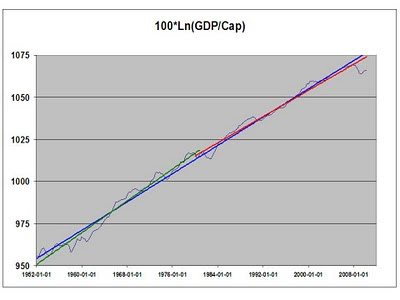 Sure enough, the green line has a greater slope than the line for the entire data set, while the red line has a lesser slope. 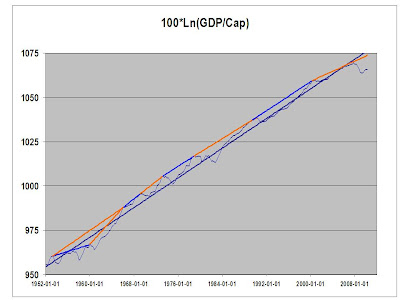 Connecting peak to peak illustrates the changing slopes over time.  The alternating blue and orange lines are for contrast,and have no other meaning.  This is less visually dramatic than I had expected, so here is a table of peak to peak slopes, in Y-axis units per quarter. 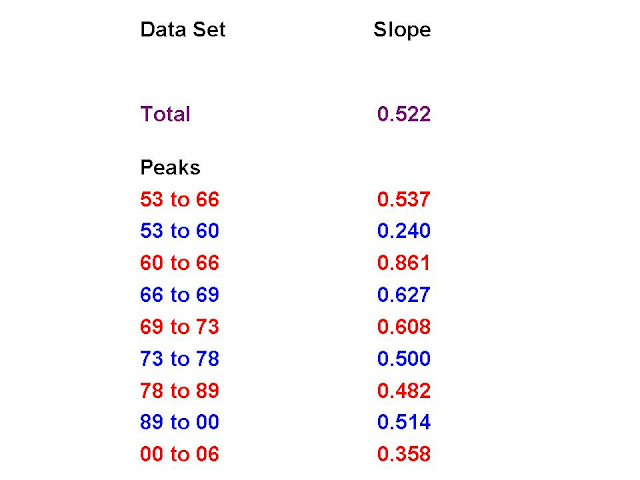 Clearly, slopes have been declining since the tumultuous 60's.  And here is where it gets political. The only period to buck that trend was 1989 to 2000 - from Reagan's pre-recession peak through the Clinton years.

Maybe this will help - plain old GDP growth, rather than per capita. 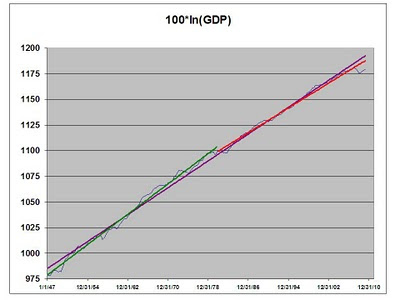 We still have the inflection, and the differing green and red slopes, but now that awful Ike-era leveling doesn't show up at all.  What gives?

As Krugman and I have felt the necessity to point out, you need to be careful in dealing with ratios (aka fractions) since both the numerator and the denominator influence the calculated values.

Here is our denominator. 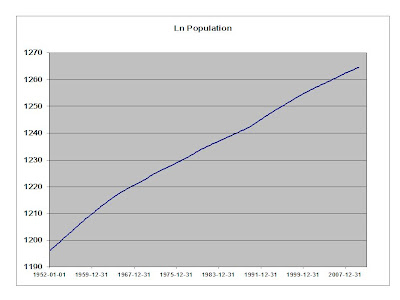 Population growth was much faster during the 50's - the post war baby boom.  Since then, it's wiggled a bit, but hasn't deviated much from linearity, so there are no further distortions.

What's happening, and why?  My assessment is that declining GDP growth is the result of huge wealth and income disparity, leading to mis-allocating resources from productive endeavor into functionally worthless and ultimately wealth-destroying financial manipulations, thus causing  an aggregate demand shortage: median wages have been stagnant for over 40 years, the artificial wealth of the housing bubble has evaporated, and people can't afford to buy things.  In short - this is caused by decades of Republican and quasi-Republican (aka Clinton and Obama) rule. It is the legacy of free market worship - exporting jobs, union busting, low taxation and the gutting of regulations.  Even Clinton stacks up poorly against the 60's.   Let me know if you have a more convincing narrative.

Here's the bottom line.  The current output gap (deviation of GDP from the trend line) is horrible, even compared to the relatively flat 2000 to 2006 peak-to-peak line.  To get back to the long term trend line will now take many years of super-robust recovery, and that is simply not going to happen in a political environment dominated by austerity and teabagger ignorance.   We're seriously screwed, our economy is dying, and nobody is willing to take the kind of bold action required to get it going again.

UPDATE:
In comments, Jerry asks for my recommended bold actions.  Here are a few generalities, off the top of my head:

Real stimulus, as in the New Deal.

Real Financial Reform, as in Glass-Stegall.

Have the fed stop paying interest on excess reserves - perhaps even consider a penalty.

And since there is no evidence that increasing taxes ever hurts the economy:

Real wealth redistribution, via progressive taxation, as before Reagan, with many brackets and steep progression to a top marginal rate of at least 70%, and restoring the 0 bracket.

Any other ideas, anybody?

Posted by Jazzbumpa at 2:19 PM

Interesting analysis. It looks like trickle down economics put the emphasis on down.

Bold Action, off the top of my head:

Real stimulus, as in the New Deal.

Real Financial Reform, as in Glass-Stegal.

And since thee is no evidence that increasing taxes hurts the economy:

Real Wealth redistribution, as in progressive taxation, as before Reagan, with many brackets and steep progression to a top marginal rate of at least 70%

How about a Tobin Tax on the Banks?

I think your question, as stated, is rather too broadly based.

What sort of transactions would you target? There might be an opportunity there, but you need to pick your spots carefully. Every action has unintended consequences, and all too often they are negative.

I agree with your diagnosis completely. But I would add: all of that in the context of a country that A) is experienced/is experiencing a spectacular decades-long technology/productivity boom (increasing ever more rapidly), and B) is on the knowledge end of a global economy.

So we have market forces squeezing less-capable people out of any reasonably remunerative jobs, while government policies are driving/holding down wages and availability for the jobs that those people can do, and taxing those wages inordinately.

My answer: much of what you say on the tax front, and CRANK UP THE EITC!!! The negative income tax was Milton Friedman's great suggestion. EITC goes it one better. (As long as there is also a generous support system for those who can't work.) See the last chapter of Lane Kenworthy's Progressive Prosperity.