Mark Twain, for one, said, "There are three kinds of lies: lies, damned lies, and statistics."   This is not quite right, for as we all know, figures don't lie.  But, my dad pointed out to me a long time age, "liars sure know how to figure."

Which brings us to Thomas E. Woods, Jr.  Over at Angry Bear, Cactus has put up a couple of posts revealing Woods' mendacity in this article.  He doesn't pull any punches.  But there is so much here that is just all kinds of wrong, that it's a fun game anyone can play.

Here is one shot at it.

In the fifth paragraph Woods says this:

The economic situation in 1920 was grim. By that year unemployment had jumped from 4 percent to nearly 12 percent, and GNP declined 17 percent.

Cactus points out that there is no reliable data on employment from that time frame.  Where did Woods get his numbers?  He offers a lot of footnotes.  Maybe they're buried in one of his sources.  Maybe he made them up.

My focus will be on GDP.  I cannot find a data set that is consistent with his 17% decline in GDP.

In fact, getting a value for GDP change during the period turned out to be quite an adventure.  Here is the data that I was able to find.  Raw data is in the sources cited.  YoY change is by my calculation. (Click on the chart to get a full page view.)  No -17% to be seen anywhere.  According to Cactus, Woods apparently indirectly uses the Historical Statistics data, 1958 price basis. 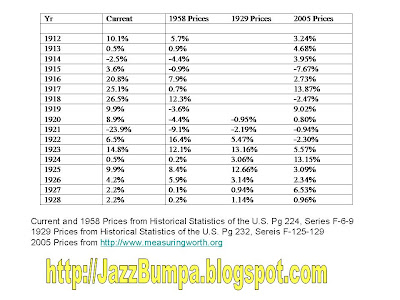 Here is a graph of the same data. 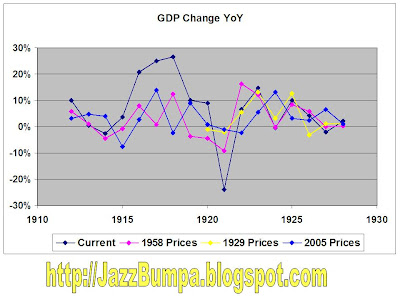 Update (4/22) : Corrected version of the graph, and text in the following paragraph. 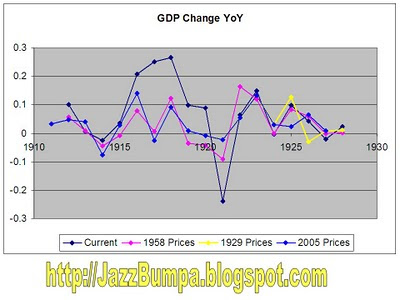 The other data sets argue a bit, but  move almost in lockstep, and seem to converge at the edges of the picture.  But in the middle there is quite a difference, as compared to the current dollar data.  Well, as Austrian Economist Robert Murphy shows us, (see CPI chart at the link)* There was an inflationary bubble from about 1915 on, that burst dramatically in 1920. The price collapse - due to oversupplies of labor, commodities, and all sorts of goods, was impressively depressing.

My conclusion:  The value of the collapse in GDP in 1920 and '21 can be whatever you want it to be, with as much validity as you want to claim.  Just cherry pick your data set.  The obvious take-away is that the current value numbers are grossly distorted by the late teens inflation, which hovered in the 15 to 20% range, and the ensuing sharp deflation of '20-'21, in the range of -15% as that bubble burst.

Make of it what you will.  What I make of it is that the sharp drop in GDP that Woods and other Libertarians and Austrians claim for 1290-21 is a data artifact caused by measuring GDP in deeply deflated current dollars.

Thanks for the info, sweetie.

It's amazing how many "new" economists we now have isn't it?