This was an inside day: minus 25 points at the hi end and plus 139 at the lo.  The span was an extraordinarily narrow 121 points, the least since 83 points on 1/17/2020 - well before last year’s crash.  If there is a positive here, it is in the day’s lo moving higher, which justifies the yellow arrow.

Last Friday there were new intra-day and closing highs.  Today was pretty uneventful. All the indexes were down a bit, and except for the SP500 which briefly went slightly positive in the early afternoon, they were all in the red all day.  DJI volume has been on the light side all month, and NYSE volume has been about 70% of normal.

It looks as if the DJI and SP500 are in third waves up from the 3/23/20 bottom, at some level of trend.  If that is right, then consolidations and brief corrections can safely be ignored, and there is still a long way to go up.  If!  The problem is the weak volume.  This does not look bullish, so the signals are mixed.

I read an article recently that graphical showed that not only is the stock market disconnected from the underlying economy, it has NEVER been connected.  I’ve repeatedly said that the market is an aspect of human emotion, and the collective behaviors of investors and speculators are, at best, semi-rational.  This is why we see extreme over and under valuations, and the occasional violent jolt. 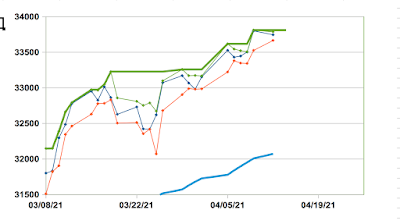 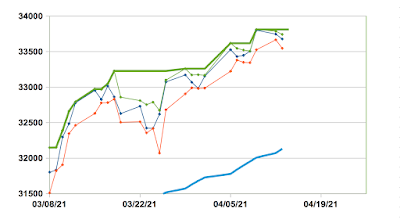 The afternoon was poor, leading to a mediocre finish.  But the morning gave us a new intra-day hi, and this was still a clearly up day, with the hi and lo higher by 170 and 123 points, respectively. The close missed a new hi by 68 points.

This month, DJI volume has averaged 79% of the mean value for the past year. NYSE volume today was 76% of its 34 day average.  Friday is the 3rd Friday of the month, when options expire, so we can expect higher volume and volatility on that day.

The indexes had relatively similar contours today, with the SP500 and NASDAQ landing in the red, and the Russell gaining the most - though it still looks like it might be forming a head and shoulders pattern. 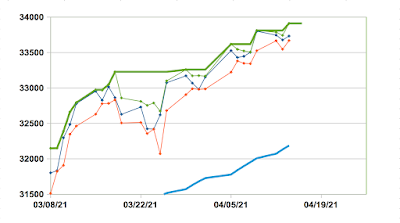 This is a clearly up day, with the hi and lo up by 158 and 120 points, respectively.  The span was 280.  This gives us new intra-day and closing highs.  The SP500 did likewise.  The Russell has been hovering between 4 and 6 percent below its hi, since a week after it was reached on 3/15.  The 5 and 34 day EMAs have been essentially identical since the beginning of the month, indicating that price gains have stalled.  The NASDAQ reached its closing hi on 2/12.  It dropped 10.5% to an intermediate lo on 3/08, and has been rising since hitting a higher lo, 8% off, on 3/24.  Today it closed less than a half percent under that high.  So there are broad non-conformations among these indexes, which is not encouraging.

I got an email today from wealthyretirement.com listing these warning signs.

1. Dollar inflows to equity funds in the last 5 months, totaling $569 billion, are much greater than the $452 billion total contributed in the previous 12 years.  This is astounding, and as a contrarian indicator is nothing short of terrifying.

2. Markets are expensive by any measure: valuations against sales, earnings, cash flow or book value.  There is also the Buffet indicator, relating the total valuation of a stock market to the size of the underlying economy, as measured by GDP.  This is at an all time hi.  Here is a graph. 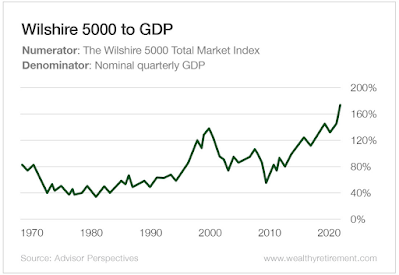 3. There is now an ETF actually named "Fear of Missing Out" with the symbol FOMO (not yet registered - link.)  Its goal is to own whatever is hot the current week [!]: SPACs, Reddit stocks, space exploration stocks, and anything else that is gaining fast.

FWIW, DJI volume is about 80% of what it has been for the previous year.  NYSE volume is 76% of it 34 day average.  This shows weak enthusiasm for the rally.

Markets can be over-valued, even extremely so, for long periods of uncertain duration.  There won’t be a crash tomorrow, or even this month.  But there could be a significant pull-back later this year.    Fasten your seat belts and hang on to your hats.  I suspect a lost decade is coming.

We just don’t know when. 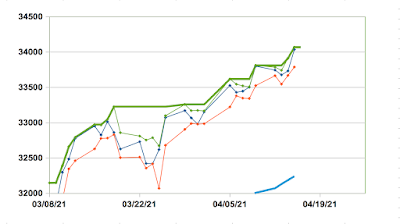 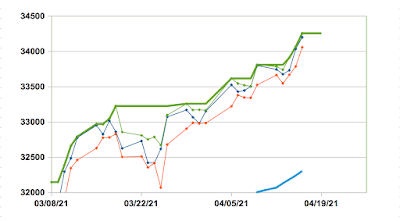 Posted by Jazzbumpa at 7:37 PM