The Effect of Capital Gains Tax on Investment

Matt Yglesias, servitor to our corporate overlords, suggests that the reduced capital gains tax rate paid by rentiers like Willard Romney is really a very, very good thing.  To wit:

The main reason Romney's effective rate is so low is that the American tax code contains a lot of preferences for investment income over labor income.
. . .
But this is definitely an issue where the conservative position is in line with what most experts think is the right course, and Democrats are outside the mainstream.
.  .  .
That's the theory, at any rate. It's a pretty solid theory, it's in most of the textbooks I've seen, and it shapes public policy in basically every country I'm familiar with. Even researchers like Thomas Piketty and Emmanuel Saez (see "A Theory of Optimal Capital Taxation") who dissent from the standard no taxation of investment income position think capital income should be taxed more lightly than labor income. Empirically, it's a bit difficult to verify that variations in capital gains tax rates and the like really are making a material difference to investment levels. But then again the data is noisy.

Sure, if you 1)accept the premise that reducing or eliminating capital gains taxes will result in productive infrastructure investments rather than worthless accounting tricks, 2)ignore the economic benefits created by consumption, 3)assume that significant numbers of people will forgo money for doing nothing just because the profits will be taxed , and 4)ignore the fact that in most jurisdictions consumption is also “double taxed,” then reducing capital gains taxes looks good.   But since all of these assumptions are (to put it mildly) highly contestable, it’s just question-begging.


My response to Matt is that in my jaundiced opinion, you might as well consult The Necronomicon of Abdul Alhazred as an economics textbook for an issue like this; and that in a world that has on the one hand Krugman, Thoma and Delong, and on the other Fama, Cochran and Cowan, a consensus among experts is about as likely as lions lying down with lambs for some purpose other than a quick snack.

To Scott I say, why assume or ignore anything when that oh-so-noisy data is readily available?

Graph 1 shows the capital gains tax rate and year-over-year growth in gross domestic private investment (GPDI,) each presented as a percent.  If Matt and what he calls "the mainstream" are right, then there should be a negative correlation between the tax rate and investment growth, since higher taxes would be a disincentive to investment. 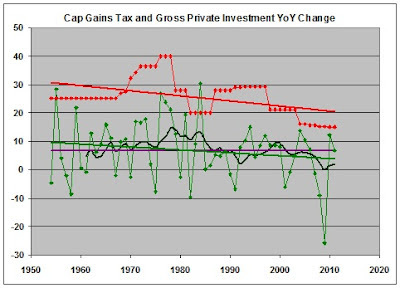 Instead, what we find is that over time, as the capital gains top rate has gone down, so has GPDI.  This is indicated by the downward slope of the best fit straight lines through each data set.  The best fit lines are based on the data through 2008, so the huge 2009 negative in GPDI is not represented.

One way to handle noisy data is to superimpose a moving average.  The dark heavy line that snakes up to a top in 1978 is an 8-Yr moving average.  This top corresponds exactly with the last year of the 40% Cap Gains Tax rate.  The purple horizontal line is the period average of GPDI YoY growth from 1954 through 2011.   Note that until 1986, the 8 Yr line is mostly above the long average line, and since 1986 it is mostly below.

This is not because the bottoms in the GPDI data set are lower since 1986.  A quick look shows that, except for the 2009 plunge, they are not.  It is because the peaks are lower.  The table gives a count of extreme data points for GPDI growth, before and after 1982, the year the Cap Gains rate was reduced to 20%.

Even at a detail level, it appears that a higher tax rate corresponds with a higher rate of investment growth, as both curves peak in 1978. 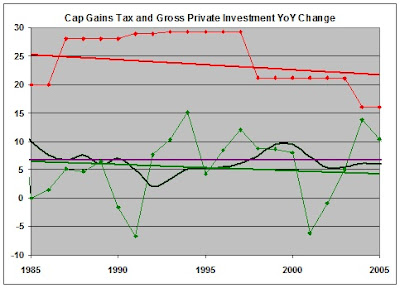 When the Cap Gains tax rate was increased from 20 to 28% in 1987, the rate of investment growth increased from 1.4 to 5.2%, and stayed at about that level until it was derailed by the 1990-91 recession.  Then from 1992 through 2000, 8 of 9 years had GPDI growth above the long average (purple line,) an unprecedented occurrence.  Granted, the last three of these years were at the lower C G Tax rate of 21.19%, instituted in 1998.  But also note that this decrease did absolutely nothing to spur increased investment.

Cutting across the data in a different way, Graph 3 presents a scatter plot of the C G Tax Rate and YoY GPDI growth, each presented as an 8 Yr average. 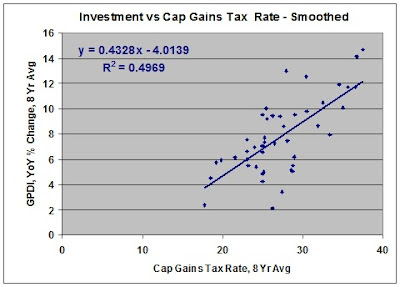 
Even with smoothing, there's a lot of scatter.  No surprise, since many other factors can affect investment: business cycle, commodity price shocks, wars, etc.  I'm tempted to say the obvious relationship is that a higher C G Tax rate leads to higher investment, but I don't want to get into a correlation-is-not-causation brouhaha.  So I'll simply say that the idea that lowering C G taxes leads to increased investment - and therefore increased economic growth - is not only unsupported by the data, it is refuted by the data, and therefore contrary to fact.

So, once again, we find a mainstream economic idea that is only valid in some imagined alternate reality.

Capital Gains Rate data can be found here (Returns With Positive Net Capital Gains Table, 1954-2008) and here.  There are a few slight discrepancies between these sources, mostly in transition years.  I have used the maximum tax rate, column farthest to the right in either table.
Gross Domestic Private Investment is FRED series GPDI.

Cross posted at Angry Bear
Posted by Jazzbumpa at 1:56 PM

And you have done that!