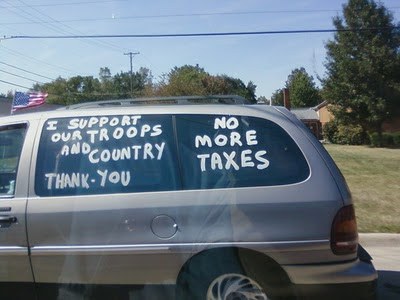 Here is a demonstration of muddled thinking that ought to be extraordinary, but is unfortunately all too common.  We want our Trillion Dollar wars, but we don't want to pay for them.  Nor for infrastructure, either, though I think it might include the street we were driving on.

I can't say for sure that the driver of this vehicle is a card carrying tea bagger, but certainly the ideas presented on this mobile billboard are consistent with thier mental processes.

I'm tempted to say that tea baggers are a very special kind of conservative - they combine the typical regressive tone-deafness to irony with abysmal ignorance and a depth of thought that on a good day might reach as much as one ångström.   But actually, they are typical.  This is just the current manifestation of what in the past has been the Liberty League, the John Birch Society,the Moral Majority etc.