Poverty is in the news today - really, really bad new. 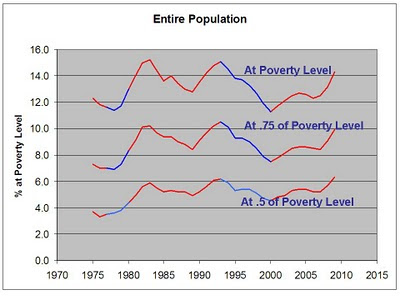 Here we see, since 1975, the percentage of the population at 50, 75 and 100% of the poverty level.  Republican and Democratic administrations are indicated in Red and Blue, respectively.

Going back in history, the numbers move up and down significantly.  However, the only big drops in the number of people living in poverty were during the 60's and the 90's - and more specifically the Kennedy-Johnson and Clinton adminsitrations.

Note, though, the percentage living at or below half the poverty level - those destitute souls living in truly grinding poverty.  Their number is now the highest ever measured.  (It's probably lower now than in the 50's.  But you certainly can't thank Republican administrations - and the Bushes in particular - for any of that.)

Look at this, though. 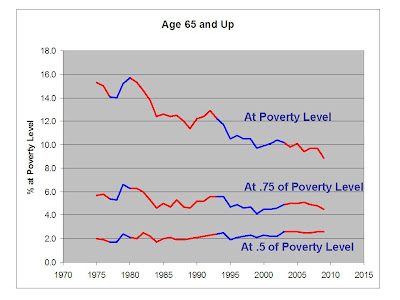 While the percentage of older Americans living in poverty has declined quite dramatically, the percentage living at only half of the poverty level has actually increased.  This indicates a deep split in the retired population - successful haves, and struggling have nots.  And I can assure you - though I am not yet 65 - that struggling gets all the more difficult as you grow older.

Here is the percent at the poverty level for the entire population plotted with that level for those 65 and older. These are the top lines from the two previous graphs. 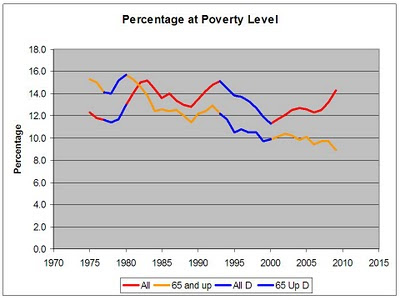 What are we to make of this?

Could the decline in aged poverty be a big success for Social Security and Medicare?  If so, what about the poorest?  Maybe their access to these programs is limited in some way.  I don't know.

In the general population, the percentage at only half the poverty level has continued to slowly increase.  Even the Clinton prosperity did next to nothing for them.  Is this a failure in wellfare reform?  Is this problem simply intractable?  I don't know that either.

What we do know is that wealth disparity has increased steadily over the last three decades, and is now at an all time high.

There's that data.  What's your narrative?

Data from the Census Bureau (Table 5).

H/T to Robert at AB

Statistics are all fine and dandy, but as we all know, poverty also has a face, and that face is all too often the face of a beautiful young child who "chose" to be born to a loser rather than to a winner (you saw that post on my own blog). But hey, better them or us, right? It's all about the bad choices they made, right? They should have just chosen to be born to a rich SOB if they didn't want to be poor, right?