I've shown graphs of this type before, but here is one more, from Wikipedia showing the share of pre-tax income held by the top 1%, and its fractions, over time.  Their degree of capture, though variable, was historically enormous, even through the great depression; dropped through WWII; and was then relatively flat through the mid 80's.  After then, it rose rapidly and is now in the range of the roaring 20's levels. 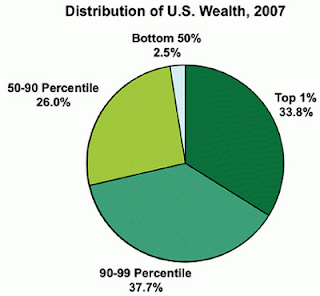 It is against this backdrop that Adam Ozimek told me here that I need to reconsider my narrative on wealth and income distribution, since it is not supported by the data.  Adam is being obtuse, in more ways than one.  First off, in that post I had no narrative - only questions.  I do have a narrative now, which I believe is data-driven; and in all honesty, my underlying opinions have, if anything gotten stronger in the reconsideration.

Another thing I've dealt with before is the ugly reality of tax policy.  It is no great mental leap to look at tax reductions on high income since the Reagan regime, along with the elimination of the zero tax bracket in 1987, and conclude that both wealth and income disparity are their direct resultants.

But, before I get to my narrative,  a small digression.  The Steven Horowitz post I originally quoted reaches a completely different conclusion form this NY Times entry, using a different, but not greatly dissimilar data set over a slightly different time span.   The Times' interactive graphics are impressive and illustrative.   So, in a sense, data doesn't matter.  If you are determined in believing something, you will be able to, no matter what the data tells you.  Horowitz believes, and presumably Adam concurs that:

The bottom line is that income mobility is alive and well and seems pretty consistent regardless of who is president or who controls Congress.  The underlying market processes appear to be doing well at enabling a majority of those who start out poor to move up the income ladder within a decade or less.

The part about government is pretty close to correct.  Data over different decades do tell similar stories.

Where I part company with them, and my narrative begins, is in their apparent belief that income mobility represents anything like real wealth and social mobility - at least in a way that is worth crowing about.  (And the underlying blind faith in the magical market fairy wouldn't have been shared by Adam Smith.)   First off, it's hard to imagine a modern society with absolutely no economic mobility.  There is going to be some, regardless.  According to Barbara Tuchman in A DISTANT MIRROR, even medieval France, under static feudalism, had a turnover rate among the landed nobility of about 50% per century.  The question now is, how do we compare to the rest of the industrialized world.  The meaningful way to measure that is across generations, not within anyone's wage history.  And all indications are we are quite static in that regard.  Reaganite America and Thatcherite England are less mobile than other countries in Europe.

What is being touted as "income mobility" is a combination of some measure of real mobility, plus a lot of churning, drift, and (to BT's point in comments to my original post) the natural earnings arc across a typical professional career.  In ECONOMICS EXPLAINED, Heilbroner and Thurow tell us that about 1/7th of the bottom quintile is composed of young people just starting their careers.  My take is that their inclusion in the bottom quintile is a data artifact - ephemeral, and not at all indicative of either their background or potential - which remain strongly correlated, though access to educational opportunities.   Another 30% represent old people on fixed and limited incomes.  My older relatives are in this category.  Again, the income level might or might not be reflective of their actual level of means.  For these folks, decades of income history precede the slide into the bottom income quintile - which is taken by Horowitz as evidence of downward mobility.  In my own case, by retiring, I've moved at least two quitiles down from 2008.  This is nothing remarkable.  It most assuredly is not an example of someone formerly rich becoming suddenly poor.

But let's set all of that aside for the nonce, and take the data Horowitz cites, from Robert Carroll, Sr. Fellow at  The Tax Foundation, at face value.   He presents a table showing where the people in each quintile in 1999 wound up 8 years later.  His reported exit from the bottom quintile exceeds the historically typical 50% (approx) in a decade, but we'll just go with it.  I always think a graph makes numerical information more digestible, so I made a few. 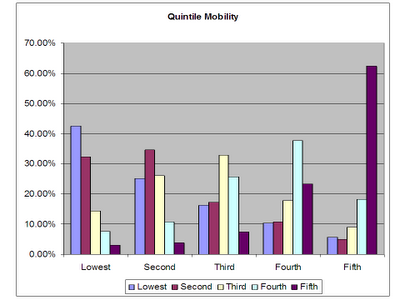 The bottom label indicates which quintile  people came form, and the bars show where they ended up.  The distributions look very much like Poisson shapes to me.  This is reasonable, since "It applies to various phenomena of discrete properties (that is, those that may happen 0, 1, 2, 3, ... times during a given period of time or in a given area) whenever the probability of the phenomenon happening is constant in time or space."

Next, note the assymetries.  A fall from the top quintile is far less frequent than a rise from the bottom.  (More on this later.) Third quintile starters are much more likely to go down than up.  Second quintile starters are almost as likely to fall as to stay put.  Consider the possibility of churning - insignificant movement across an arbitrary quintile boundary over time - something like going from the 17th percentile to the 24th, or vice versa: a change in quintile with no meaningful change in wealth or means.

Drift can occur when a person with relatively static income gets overtaken by a boundary moving up over time, as mean income rises.  It's easy to imagine that happening to those at the bottom of any quintile but the first - but most especially in q's 3 and 4, where many people achieve their maximum salaries in late middle age.   Virtually everyone who, like me, got a marketable college degree in the late 60's would travel the route through the quintiles over their careers.  We are Heilbroner and Thurow's 15%. (To be clear, this is 15% of the bottom quintile, not the entire population.)

To complete the picture, let's take a look at the high income end. 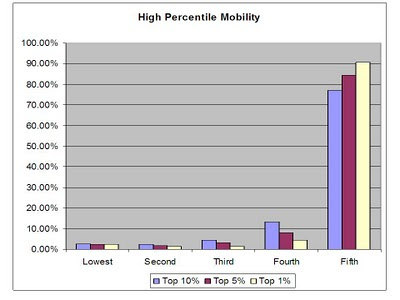 The first and most striking thing to notice is that if you are in the top 10%, you are almost certainly going to stay there.  The corollary is that almost everyone who left the top quintile was below the 90th percentile.  If you are rich, you stay rich.  If, like me, you had a reasonably decent career that allowed you to crack the top quintile after a few decades, you were primed to drop out at retirement.

I suspect that the bottom 5% have similar non-mobility.  So the born poor, die poor life story is still very much intact.

So here, in summary, is my narrative.  Yes, there is real WEALTH mobility in our great nation, and there always has been.  But it is far less meaningful than the Tax Foundation and its fellow travelers would have you believe.   Those of us in the middle class already have lots of opportunities to move through the quartiles of INCOME as we negotiate out careers.  There are both churning and drift at the quintile boundaries.  Real dramatic movement from rich to poor, or from poor to rich might not be exactly rare, but it is certainly far from being common, and is not a realistic goal or expectation for anyone.  Conflating income changes with wealth mobility, and then calling these income changes a great success for allegedly free markets is simply a regurgitation of time-worn right wing ideology, and not a data driven conclusion.   Real wealth mobility takes place across generations, just as it did in medieval France.  Income distribution paints a picture that is colorful, interesting in and of itself, but not at all compelling in terms of moving people either into or out of poverty.  In a context of historically wide wealth distribution, any focus on trivial income changes is misleading, ideology rather than fact driven, and fatuous.

What do you think?  Is my narrative supported by the data?

Update:  M Bouffant has some more graphs (you know I love graphs - and the non-mobilty vis-a-vis other countries is pretty striking.) along with some short but very pointed commentary delivered in adult language.    You have been warned.  Big H/T to Suze.

Update 2:  M B's graphs come from a report by the Economic Mobility Project.   Their language is circumspect, but clearly verifies, validates, and confirms my narrative. A quote from former president, and well-known flaming liberal G.W. Bush in 2007 is telling: “The fact is that income inequality is real — it’s been rising for more than 25 years.”  I can also now state with considerable confidence that the economic mobility that my generation enjoyed has significantly deteriorated.  The land of opportunity offers less to my children and grandchildren that it did to me.

Update3:  As sad as these results are, allow me to paraphrase Steven Horowitz and say "just think what we might do" if we restored the kind of tax and regulation policies that gave us a strong and vital middle class 50 years ago instead of operating with a blind faith in the magic of free market processes.
Posted by Jazzbumpa at 5:02 PM

Stay on this, sweetheart!

M. Bouffant has another chart at her place.