To further illustrate the idiocy of Ed Lazear's claims in his WSJ article, I've done some more playing with the numbers.  I also got a new data set for GDP growth, so values through 2009 are included, based on chained 2005 dollars. I also found estimates of  Taxes/GDP for 2009 of 15.1 and 15.4 %.  I used 15.4%, since the higher number favors Lazear's case, though the difference is decimal dust.


The first graph shows how GDP growth, year over year, and Taxes as a percentage of GDP vary over time.  Taxes/GDP is in blue, GDP YoY is in pink.    Also included are period averages and best fit lines (least squares method) for each data set.  Taxes/GDP average is 17.97%; GDP YoY average is 3.34%. 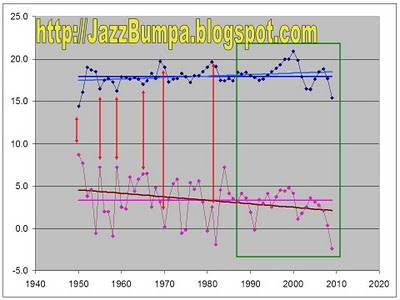 For Taxes/GDP, the period average and best fit lines are close.  Slope of the best fit line is slightly positive at 0.017% per year.  For GDP YoY, the slope of the best fit line is negative at -0.04% per year.  This corresponds to a decline of just over 2% in 50 years.  This also explains the negative correlation Lazear emphasizes so strongly.  While the trend of Taxes/GDP has been almost level, the trend of GDP has been down.  This imposes a negative bias on a comparison of the two data sets.

The really striking thing, though, is the comparative motions of the data gyrations over time. From 1950 through the mid 80's, motion was typically contrary: peaks in one corresponded to troughs in the other.  Since the mid 80's, motion has been generally quite similar.  Over the most recent 25 years of data, this is the exact opposite of what Lazear would have us believe.

So, what does this mean?  Absolutely nothing.  Big GDP Whoop!  Each value is a resultant, not a determining factor that can rationally be used as the independent variable in some psuedo analysis.

But, just for kicks, let's play Lazear's game.  Here's the cloud plot again, with the new data set.  The worst number since 1950 now belongs to Barack Hoover Obama.  Note this also corresponds to a very low tax receipt value.  GDP is down because business activity is down.  Taxes are down because profits are down and people are out of work.  As I said, both numbers are resultants.  This is not rocket science. 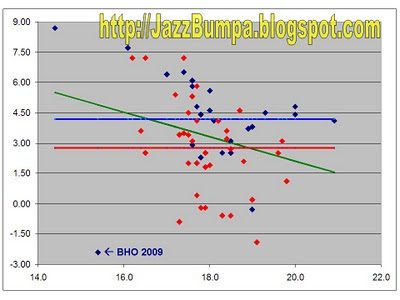 The green line is again the best fit straight line.  Correlation is now -.28, deeply into the weak range.  All by itself, the 2009 result utterly destroyed the tattered remains of Lazear's ridiculous hypothesis.

But why don't we take it another step.  The Blue and red lines are the averages of GDP growth for Democratic and Republican administrations.  Democrats achieve 4.19% growth, Republicans achieve 2.77%.  The difference is almost Lazear's 1.5%.

So let's say this:

Republican administrations are clearly bad for the U.S. economy.  For example, were we to elect Republican presidents over the next 25 years, GDP per capita in 2035 would be about 30% less than if we were to elect Democrats.  A 30% per capita GDP differential is about as large as the difference between the U.S. and Greece today.

This might seem as silly as the Lazear quote I've manipulated.  But there's a difference.  Lazear's conclusion was based on the assumption that a meaningless data artifact is determinative.  Mine is based on the assumptions that policy matters, and that Democratic and Republican policies are different.   Since 1968 we have had a Republican president 68% of the time.  Lets take another look at GDP growth over the period.   I've calculated a 13 year exponential moving average over the period.  Segments in blue represent Democratic administrations, segments in red represent Republican administrations. 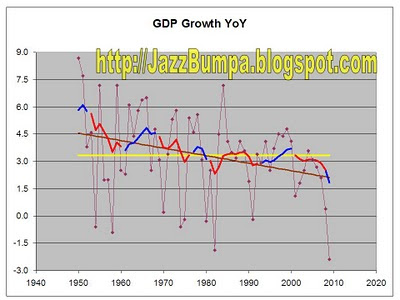 Republican administrations are clearly bad for the U.S. economy.
.
Posted by Jazzbumpa at 1:30 PM

Interesting, and you seem to be correct that little correlation holds between tax slashes and increased GDP--(tho' looking at chart, Reagan did produce a great jump in GDP in 80's and tax as % of GDP was low--at least in regards to 80s Lazear may have a point) but not sure of ... correlation coefficients required (even Cactus says his liberal analysis is no better than 40% or so); Cactus's analysis seems prima facie sound, but statistical proof is not the same as mere plausibility (really, most studies require about 75% reliability, or it's fairly meaningless, right). So I would say, the liberals are in the same boat, at least in terms of saying raising taxes results in improved GDP: note that tax raises don't always match a higher GDP.

Economics is all about guestimates.

(that is, assuming GDP to be...meaningful; really to be precise it should be parcelled out between private/public sector, income levels, industries, etc)

I have read that Galbraith finally gave up on econometrics as a sure indicator of economic success (or failure), instead preferring parcelled out demographics, relating to prices, wages, property values, industry, etc.

But I think his numbers are inflated by his huge deficits, which these posts haven't addressed.

At the very least, there is NO chance that lowering taxes did any general or economic good, and at least some finite probability that tax increases might have.

Performance over time is very suggestive. For 68% of the time Repugs have been in the White House, and GDP growth has systematically declined. Didn't look so great under Ike, either.

It's up to them to defend their record. But they can't do it, so instead, they make shit up.

That's why we're so screwed.

Not sure where you get GOP was in control "68%". The President split, starting from 1960 through 2012 (assuming BO makes it OK), it's like 24/28. So that's what, about GOP in control of POTUS about 54% (and change). Which is to say, Demopublicans have for 50 years been bad for the GDP. (and if you include Ike, why not FDR?...endpoints sort of an issue--same for the data. The results of tax hikes/slashes probably don't materialize for a year, or more....) . However, to give El Diablo his due, run the regression just on 80s, and Lazear's claim looks like a correlation--not sure if significant or not (just looking at GDP spike around 83-84, which stayed up--and note that the GDP for both Dem and GOP goes down near the end of their term. And Bush II collapsed at first, but...like after 9-11, GDP takes off again. Warbucks-o-nomics)

Before 68, we were living in a different and more real world.

If you go back to 1950, the R/D % flattens, sure, but the Reps went on an irrational track with Reagan, and bat shit crazy after Gingrich's contract on America. That's part of my point.

I don't think I'll run the regression on 80's. It's a bogus relationship, so there's really no point. Besides, the 80's were skewed in their own way, with totally unnecessary and not particularly useful deficit Ronnie spending.