Republicans - All Wrong, All the Time, Pt 6

I've stated that the Republican policies of tax reduction have not been helpful in encouraging GDP growth.  I've also posted on the poorer performance of Republicans in various social measurements - notably reducing abortions.

Now, I've discovered similar work, though far more extensive and scholarly, done by cactus at Angry Bear, back in 2007.  What's your favorite economic measure:  GDP growth, National  Debt, real tax collections, value of the dollar, health care costs?  What's your favorite social issue: abortions and unwed motherhood, marriages and divorces, sexually transmitted diseases, youth crime?   The stark truth is that the nation does better on all of these issues with a Democrat in the White House.

For economic issues I’ve looked at, it seems to be a slam dunk. Republicans simply performed worse. On every measure. Period. End of story.

For social issues… Republicans did better on teen cigarette, alcohol, and drug use. GHW also managed to do well on containing gonorrhea, though not much else. (And by “not much else”, I mean not only at not containing other STDs, but really, truly, not much else, whether in the social or economic sphere.) Otherwise… whether reducing the incidence of abortion, decreasing teen motherhood, encouraging marriage, reducing the incidence of most STDs, or cutting teen violent crimes, Democrats did better.

So, whether you're concerned with economic value, or family values, you will find your life more fulfilling and the world a better place with a Democrat in the white house.

And lest you intend to bring forth the Republican canard that Congress, not the President is the controlling factor, please be apprised of these facts, re: GDP growth - debt growth. 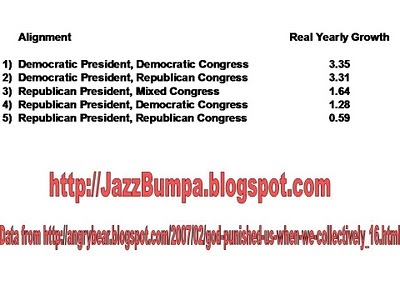 These differences are stark, and consistent.  The lesson is simple.  Republicans are bad for the economy.

Cactus also exposes the "tax cuts are good for the economy" fallacy.

I'll probably have more to say about this later.  Meanwhile, why is it that the Democrats are not yelling these facts from the tree tops?  I mean WTF? Really!
.
Posted by Jazzbumpa at 7:43 PM

The Democrats aren't shouting these facts from the mountaintops because in the inside-the-beltway bubble, these *aren't* facts. Inside the Beltway is a different universe, where tax cuts increase tax revenues, businesses flee states because of taxes, and the USA has the best healthcare in the world. These facts you mention only apply in *our* universe -- a universe that the modern Democratic Party no longer lives in.

In short, like President Hoover II, the Democrats have disappeared into the Washington Bubble where “conventional thinking” (i.e., thinking by cretins, for consumption by cretins) is all that counts, and we’re all going to pay the price for that.

Well, I agree and disagree, jzb. Reagan's slashes on the upper brackets--especially the capital gains rates--were wrong; for one, Raygun increased the defense budget substantially, yet decreased tax revenue. So RR was a deficit-debtor type just as the Demos are.


Tax cuts on the lower and middle class might be reasonable however. The Ahhnuld trick involves barely raising taxes on anyone--and don't dare ever touch property tax rates. Instead Ahhnuld increases fees--DMV, tuition, licenses, parks etc. So in effect it's a tax raise on lower and middle class,like when they have their tuition at a community college doubled.

But I'm sort of a libertarian when it comes to the taxing the poor, or middle class. Few or No taxes until you're making 200 grand + or so. Millionaires kicked up to 50% or so. But at a Billy Gates or Warren Buffett level have 'em paying like 90%+ on everything (especially interest on investments), or mandatory philanthropy, or just gulag 'em.

BT -
It's still hard for me to understand. Politics is about winning, and this is a whole litany of what ought to be winning economic and social issues. The facts are indisputable, and easy to locate.

J -
We don't disagree very much. Reagan was a deficit debtor, but that doesn't make him like a Demo. His spending went into destructive activities that didn't do much for the economy.

Further, most of his policies were highly regressive. One thing we can give him credit for is the expansion of the earned income tax credit in '86. That's about it.

I'm a big believer in progressive taxation. I sure wouldn't exempt the first $200K though. There's a lot of ability to pay and use of resources before you get to that level.

In the posts I've looked at by cactus, he hasn't addressed middle class taxation, nor the mid range of tax brackets. Might be a interesting field of study. But I think the most important action is at the extremes.

Top tax bracket rates and capital gains rates have been below their optimum values for decades. I don't know that 90% is right, but we did OK when it was up there.

It makes more sense in a world where 2+2=5, Jazz. And that is the world our politicians live in.

I have never been able to figure out why business supports the Republican'ts when whenever they are in power the economy goes in the tank. Their policies are just bad for business, yet business still gives them truckloads of money!! Go figure!!

Two points:
1) It's the triumph of ideology over reality. It's amazing how people turn Republican as they climb the corporate ladder.
2) Corps are run by the wealthy. Rep policies might not be good for companies, the economy, or the country as a whole, but they are very good for the rich.