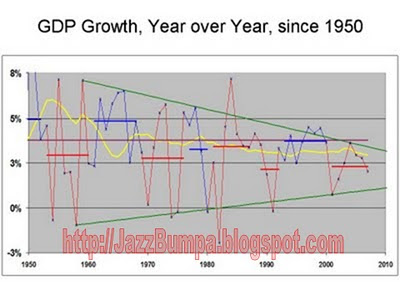 Except for Carter, who represented a brief 4 yr. Democratic hiatus in a 20 year Republican Red Sea, and couldn't quite nose above Reagan's deficit-inflated performance, GDP growth is always better with a Democratic president.

The horizontal line, which Clinton hugged up against, is the long term average of 3.77%. It is also above what any Republican can accomplish. Let's repeat that for emphasis. Every Republican administration since WW II achieved below average GDP growth. Impressive!

The yellow line is a 21-year moving average, humping and bumping on a obviously downward course. Note it's position relative to the long term average, since 1980.

All the above is fact. The two green lines are my interpretation - a collapsing envelope that almost (but not quite) perfectly contains the data points. These lines converge below 2%, in another decade or so.

Data is through 2007 from: http://bea.gov/national/index.htm#gdp

Update: I forgot to mention the salient fact that across the graphed period, tax rates - both nominal and effective - have gone down, repeatedly and dramatically. Of course, deficits have gone up as a result. But none of this artificial stimulation has been able to sustain GDP growth at historic levels.