The SP500 broke out of a  trading channel that contained it quite neatly from Wednesday until this morning.  The peak this morning was at 1171.40, within a fraction of the .618 retracement of the drop from 8/31 at 1171.14.   This occurred against steeply dropping momentum - as you would expect from a day and a half of sideways motion. 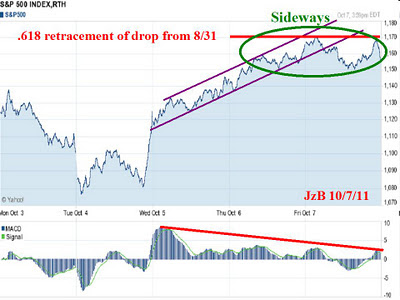 The next leg down might be starting, though the time proportion seems awkwardly short.  It's too late to give this any deeper thought, and next week should clarify the picture.

UPDATE:  I would like this to be a correction of the drop from Tuesday, Sept.27.  But, if so, it passed the .768 level at 1169.96 by a couple of points.  This is extremely steep for a retracement, but not impossible.

The market is not well known for doing what I'd like.  But if it does, then my prediction of an intrmediate bottom in the 1000-1050 range is still a possibility.