The Tigers of August

And some disturbing things happened during those 11 losses: 1-2 against the both depleted Yankees and the hapless White Sox, scoring 1 run total in a mid-month double header against Royals, and dropping 3 of 4 at home against the A's.

After avoiding the sweep, the Tigers were glad to see the Indians come to town, and finished the month with a string of three victories.  The first of these came with Torii Hunters 3 run walk-off HR in the last Oakland game.  This one swing of the bat symbolizes something the Tigers did in August that they have done far too little of all season - score late, while shutting down the opponents late scoring.  The Tigers scored 35.5% of their runs in innings 7 or later, by far their best late-inning production, and doubling the July result.  Meanwhile, opponents 7-on scoring was only 26.5% of their total, and this is in the context of only 3.77 runs per game.

For the first time this season, I feel good about the way the Tigers are finishing games.  In fact, for August, the 9th was their most prolific scoring inning.

Here is scoring by month for the season so far.

Here's the scoring break down by inning.  The late runs are good, since total scoring is down a bit. 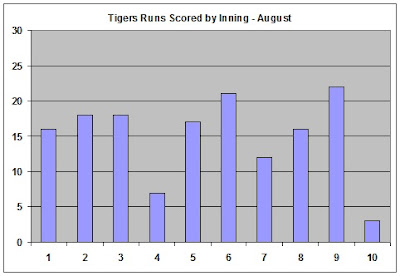 And for the other guys. 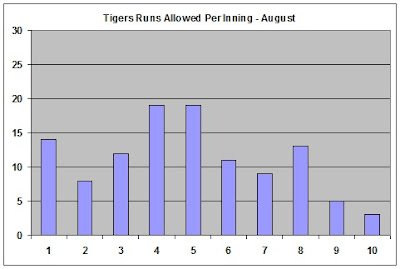 It's nice to see that late inning fall-off.

Here are some random stats.

Scoring is down a bit, and that might be a concern going forward.

But for now, I'm optimistic.

Posted by Jazzbumpa at 3:14 PM